While Estonia was an unwilling member of the Soviet Union, from a military perspective it was a legitimate target in the event of a Soviet nuclear first-strike attack on the UK or its NATO allies.

I will never forget the first time I saw a Vulcan bomber take-off. Standing next to the runway at RAF Boscombe Down (as it then was), wearing ear protectors far too large for my small ears, I watched its majestic and graceful frame ascend into the sky with a dexterity not normally seen in heavy bombers. I was awestruck. Despite the Vulcan having already retired six years before, it was (and still is) chilling to think of the destruction these aircraft might have unleashed on the world had the chess-like brinkmanship of the Cold War played out differently.

During the 1960ies, the Vulcan bomber formed the backbone of the British nuclear fleet and, at any given moment, a certain number were at a state of permanent readiness. In times of heightened tension, they could be airborne within two minutes – the shortest warning given of a Soviet nuclear attack was estimated to be three and a half minutes. Once airborne, they would have flown at over 40,000 feet over the North Sea to southern Norway until they reached the “positive release line”, beyond which they would not fly unless a given a positive command to do so.

Once this invisible line was crossed, the bombers would fly around the coast of neutral Sweden until they were over the island of Gotland where they would split up and head for their individual targets in the Soviet Union. In the first set of strikes, three bombers would have been dispatched to attack Tallinn, Tartu and Viljandi.

While Estonia was an unwilling member of the Soviet Union, from a military perspective it was a legitimate target in the event of a Soviet nuclear first-strike attack on the UK or its NATO allies. Extensively militarised and part of the Baltic Military District, it was home to at least six air interception squadrons, heavy bombers and units of the Strategic Rocket Forces. 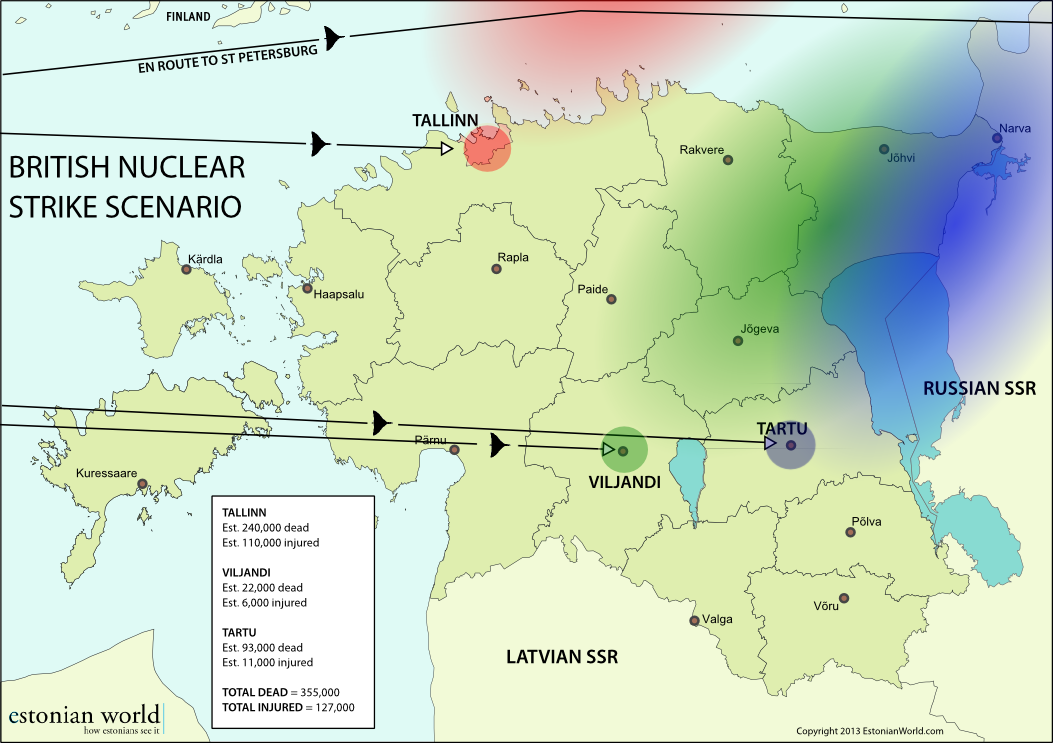 The British Vulcans were armed with Blue Steel stand-off missiles (“stand-off” meaning they could be deployed at a safe distance for the Vulcan to be able to escape the resultant explosion) which had an explosive yield of approximately 1.1 megatons. In comparison, “Little Boy”, the atomic bomb dropped on Hiroshima, Japan, had an explosive yield of just 0.16 megatons.

There is no doubt that the effects of these strikes on Estonia would have been devastating. Approximately 350,000 people would have been killed just from the explosion itself. If you factor in the human cost of nuclear fallout for the surviving population (had there been one), this figure can be safely doubled. Fallout from the bomb dropped on Tallinn would also have reached Helsinki and Southern Finland.

Simultaneously, nuclear weapons would have been dropped on strategic targets in Latvia, Lithuania, Belarus and, of course, Russia. The scale of devastation would have been catastrophic.

So next time you’re are on a plane, enjoying the sights of Estonia and the Baltic Sea from the air, remember this article and try to imagine the view with the terrifying overlay of nuclear fallout and mushroom clouds.

A note on the illustration

In creating the illustration, I have made certain assumptions. Firstly, that the Vulcans that were to target Estonia were equipped with Blue Steel “air-burst” nuclear stand-off weapons – this is the most likely scenario. Air-burst nuclear weapons detonate in the air over their target and the amount of fallout is reduced. Secondly, the number of casualties from a nuclear blast is difficult to calculate.

The figures here should be regarded as reasonable estimates, but necessary assumptions were made, especially with regard to the daytime populations of Tallinn, Tartu and Viljandi. Any mis-calculation is likely to result in an under-estimation of the human tragedy involved. It is also important to note that neither the short nor long-term effects on health from nuclear fallout have been taken into consideration. Fallout is shown on the map by the opaque clouds, shaded according to the relevant nuclear target.

Cover: A Vulcan B.2 of the Royal Air Force.

Chris Glew is Estonian World's London Editor. Chris has also written for other international media outlets, as well as for Estonia's Postimees, Eesti Päevaleht and Delfi.