The prime ministers of Finland and Estonia, Jyri Katainen and Andrus Ansip, have concluded the world’s first known digitally signed intergovernmental agreement focusing on common development of e-services between the two neighbours.

While remaining in their respective offices in Helsinki and Tallinn and using ID cards, the prime ministers signed the Memorandum of Understanding (MoU) between the two countries, taking the co-operation in information and communication technology between Finland and Estonia to a new level.

In 1998, US President Bill Clinton and Irish Prime Minister Bertie Ahern became the first heads of government to electronically sign a communique – a pact on e-commerce. But according to Siim Sikkut, an information and communications technology advisor to the Estonian government, the signing by Clinton and Ahern was a one-time event with specially issued ID-cards, with their signatures not carrying full legal weight, only ceremonial value. Ansip and Katainen, by contrast, have signed a memorandum of understanding containing clear commitments by both parties and will now regularly use digital signatures to conclude agreements. 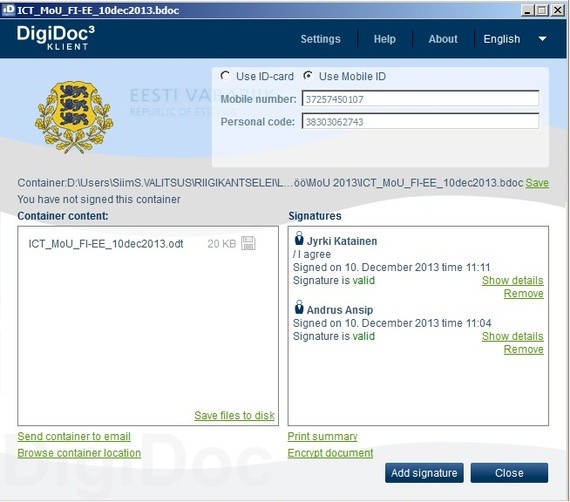 According to Ansip, the key advantage of the digital signature is saving time. “Saving time also helps save money. In Estonia, we save time worth a total of two per cent of the annual gross domestic product (GDP) by using digital signatures – this is equivalent to saving one week of working time per person. There are about 4,500 Finnish companies in Estonia and about 3,500 Estonian companies in Finland – one can only imagine how much more effective the communication between the two countries becomes due to digital signing,” the prime minister said.

The cooperation in information and communication technologies between Estonia and Finland goes way back. Finland introduced ID-cards first – the example of which was followed by Estonia and inspired the development of its own national electronic identity system.

One of the central agreements of the MoU foresees that the state data exchange layer, known in Estonia as the X-Road, will be developed jointly with Finland in the future. The clearest benefit of such data exchange platforms lies in the fact that citizens and companies have to be asked to submit information just once. The cooperation will be based on the present version and source-code of the Estonian state data exchange layer X-road. With the introduction of a similar solution in Finland, the countries will begin to offer bilateral cross-border e-services, with the first pilot projects to go public in 2014.