The Freedom on the Net 2016 index, compiled by Freedom House, has ranked Estonia first in the world.

The Freedom House report, one of the most authoritative reports in the field, investigated 65 geographically dispersed and politically diverse countries, and ranked them according to obstacles to access, limits on content and violations of user rights. These results translated into quantitative (0-70) and qualitative (free, partially free, not free) ratings. Estonia retained the status of “free”, and actually improved its score from last year by one point. There were no government-imposed restrictions or disruptions to internet access during the past years.

One of the most digitally advanced countries in the world

“Estonia’s advanced internet freedom environment continued to make gains thanks to the increased internet access and online participation among citizens. Estonia continues to be one of the most digitally advanced countries in the world,” the report said. “Estonians have access to a wide array of content online, and there are few economic or political barriers to posting diverse types of content, including different types of news and opinions.”

The report highlights facts that will come as no surprise to most Estonians or even those who have visited or studied the country in recent years. The rate of internet penetration is high and growing, and public Wi-Fi is widely available.

There are few if any restrictions on content, although there have been some instances of content removal related to online communications. “Most of these cases involve civil court orders to remove inappropriate or off-topic reader comments from online news sites.” “There have been no physical attacks against bloggers or online journalists in Estonia, though online discussions are sometimes inflammatory.”

Estonia’s e-government services, such as online voting and tax forms, continue to garner praise for making the government more efficient, accountable and transparent for society at large. “The majority of users conduct business and e-government transactions over the internet: in 2016, 99.6 percent of banking transactions were done with e-banking services, and 96 percent of people declared their income electronically,” the report said.

The report also highlighted that Estonia had the largest functioning public-key infrastructure in Europe, based on the use of electronic certificates maintained on the national identification (ID) card. “More than 1.2 million active ID cards are in use, which enable both electronic authentication and digital signing.”

As in many countries, the issue of privacy for individual users on the internet has also become a widely-debated topic in Estonia, with a particular focus on the privacy policies of global service providers.

Freedom House reports that the Digital Agenda 2020 for Estonia, established by the country’s ministry of economic affairs, outlines how both technological and organisational conditions will be developed to ensure that people will always know and be able to decide when, by whom, and for what purpose their personal data is being used in the public sector.

The same agenda also launched an “e-residency” programme to offer its secure and convenient online services to the citizens of other countries.

Concerns for the rest of the world

While Estonia earned the top spot, internet freedom around the world declined in 2016 for the sixth consecutive year. “Two-thirds of all internet users – 67 percent – live in countries where criticism of the government, military, or ruling family are subject to censorship,” Freedom House said. 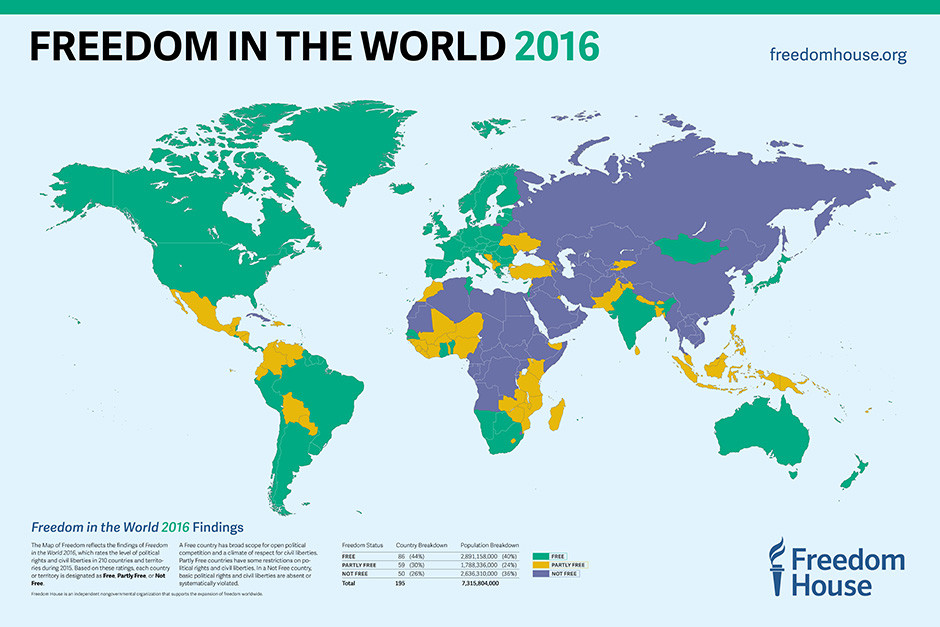 The report said social media users faced unprecedented penalties, as authorities in 38 countries made arrests based on social media posts over the past year. Globally, 27 per cent of all internet users live in countries where people have been arrested for publishing, sharing or merely “liking” content on Facebook. “Offenses that led to arrests ranged from mocking the king’s pet dog in Thailand to “spreading atheism” in Saudi Arabia. The number of countries where such arrests occur has increased by over 50 percent since 2013.”

Freedom House is a US-based non-governmental organisation that conducts research and advocacy on democracy, political freedom and human rights. Freedom House was founded in October 1941 and it describes itself as a “clear voice for democracy and freedom around the world”.

Cover: The rate of internet penetration in Estonia is high and growing, and public wi-fi is widely available. (The image is illustrative/courtesy of EAS.)