SprayPrinter is a wireless device that delivers photos on the wall via a mobile app. It’s a one-of-a-kind tool that helps people release the artist within by moving the spray can against the wall and printing over 200 pixels in any colour on any wall. As a dynamic product, it’s gaining popularity among street artists, do-it-yourself enthusiasts and interior designers.

Estonian World met the company’s CEO, Richard Murutar, and co-founder, Henry Patzig, in Tallinn as the both of them were in high spirits over going to Austria and China to sign new deals with partners. So even though their so called “life-surviving” budgets are small, Murutar remains positive when saying: “It isn’t easy, nevertheless flying high with boundless ambitions involves costs that are reasonably high.”

The last six months since the team first got together have been a roller-coaster. Not only did the startup win the most innovative Hardware Startup Award at the Tallinn Hardware LaunchPad 2016, they have also gained interest in many businesses and made it to the next part in the Estonian business competition TV show, Ajujaht. 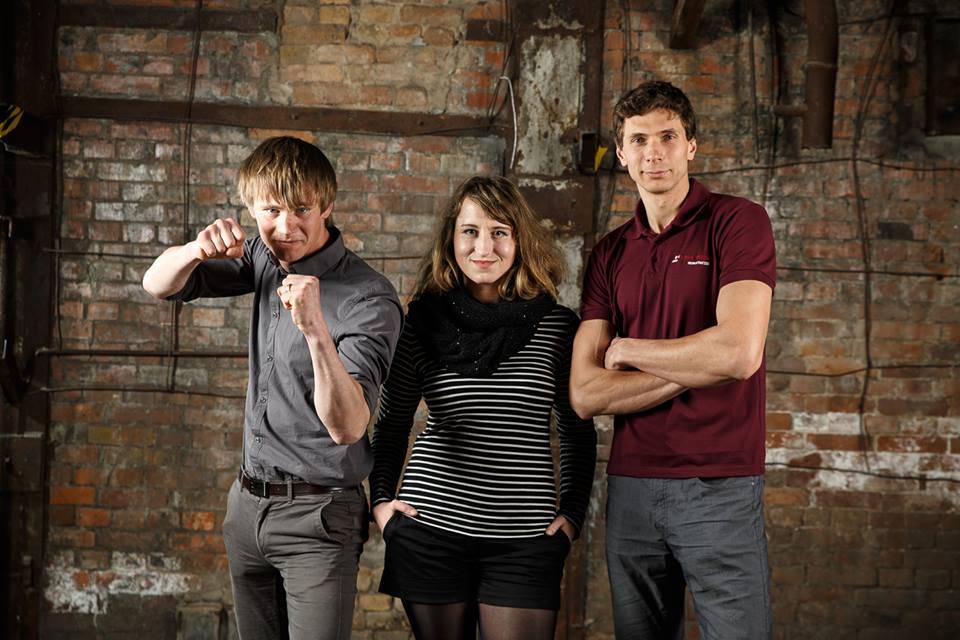 Tartu is where Mihkel Joala, the inventor and another co-founder of SprayPrinter, stumbled over the idea when he was asked by his daughter to paint a picture on a wall. Even though Joala is an artist, he had no idea how to draw. But he does have a talent for inventing things. Already before SprayPrinter was founded, he had halfway discussions with investors, who claimed this prototype had a lot of potential.

“Thanks to many great mentors, we have been able to develop the business of SprayPrinter, Matthias Lepik being one them,” Murutar, who first met Lepik when starting first startup BoatArt, says. He reflects on the experience of how in his previous business he was also the CEO, responsible for accounting and the logistics system. “Basically I was limited to creating a realistic vision, a network and communicating with potential investors at the time.” He recalls this was one the reasons why his previous business failed. “I knew this time I must change that. Our current team enables everyone to do what will actually boost SprayPrinter’s future,” he adds. 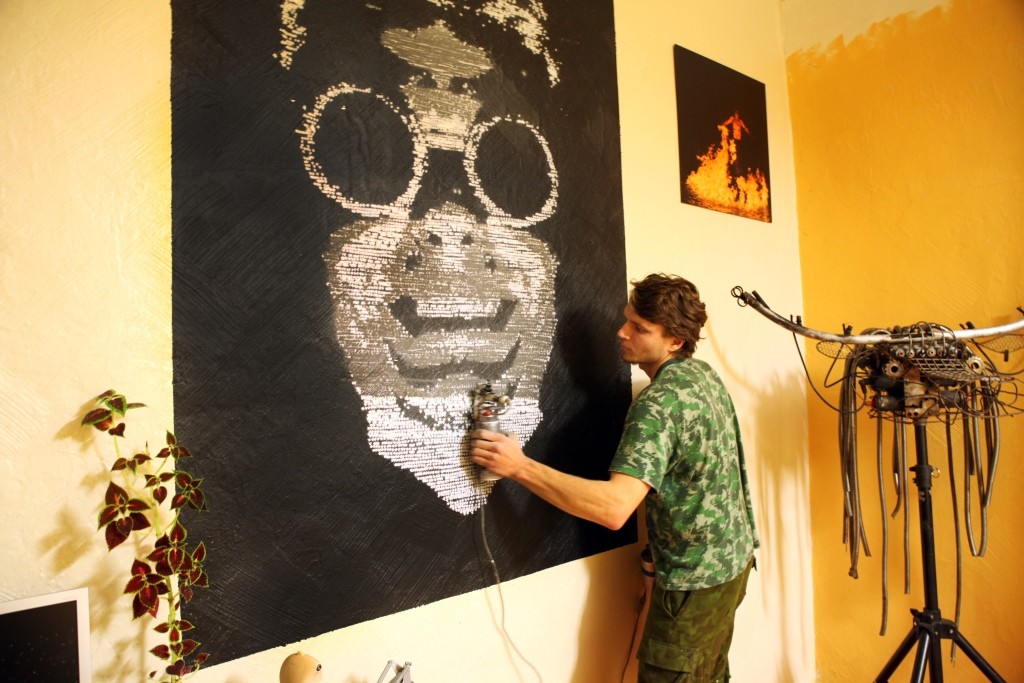 The success wouldn’t have happened without their team, although Murutar says that finding each other was “almost a lifelong process”. The initial idea of the company saw its limelight in September 2014, when Murutar met Joala through a mutual friend on an island called Tondisaar in Võrtsjärv in central Estonia. Joala, being an inventor like Murutar’s previous business partner, united their interests to collaborate on a prototype development project. After meeting Patzig on the third day of a wedding they were attending, Murutar says, “this is when we started talking about what else we are doing in our daily lives. Naturally, it also came out that I practiced MMA (mixed martial arts) and Joala karate, so we were then keen to test out who was better.”

“Well, after the eighth round we discussed other topics,” Murutar recalls. “After the wedding we met up and Joala decided to join our team. And the third coincidence was when we found our COO, Alo Murutar, who is my father, but that’s not important. It’s important that he has got a lengthy experience running many businesses – he’s strong at something I am weak at.” 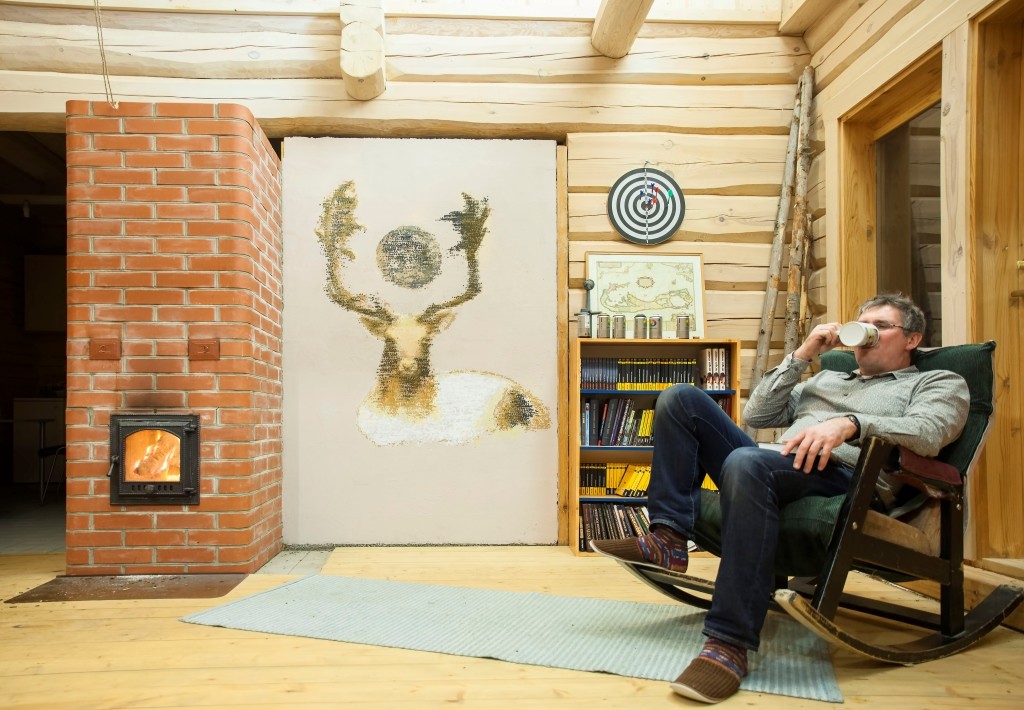 Amid the entire buzz, the team has had the opportunity to participate in some of the best events in the startup business, pitching their product in London, San Francisco and Estonia. This recognition has expanded their network connections and connected with some of the world’s most influential people in the industry – from TechCrunch editor Mike Butcher to the CEO of Prototron, Siim Lepisk, to several (currently anonymous) partners – all of whom have showed great interest in SprayPrinter. 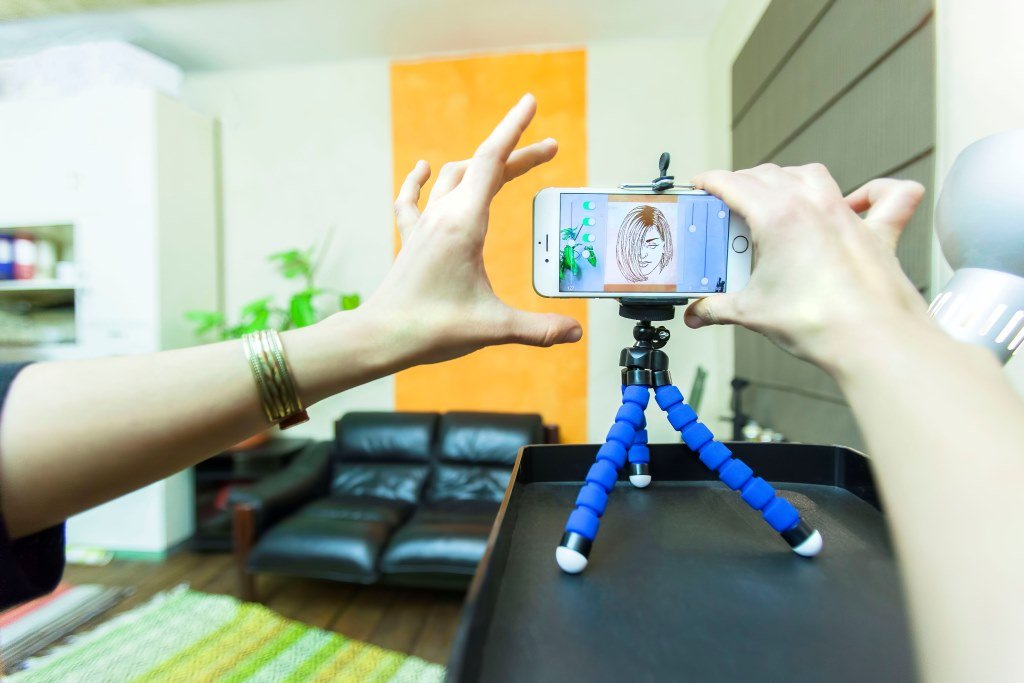 The CEO of the startup vividly reflects the company’s breakthrough, which took place last September in the BuildIt hardware accelerator programme, the second biggest in Estonia, based in Tartu. “I know from a previous startup experience that accelerators help and knowing the founders of BuildIt myself, if they support your idea then you are in business. But it wasn’t an easy ride. They said they wouldn’t take us.” It took the guys three attempts to get accepted into the programme, and when they finally got in, they didn’t get any funding. Only two weeks into the programme, the team was told their idea was good, the product had potential and BuildIt wanted to invest in it. “Ever since this event our journey has prospered step by step,” Murutar says. 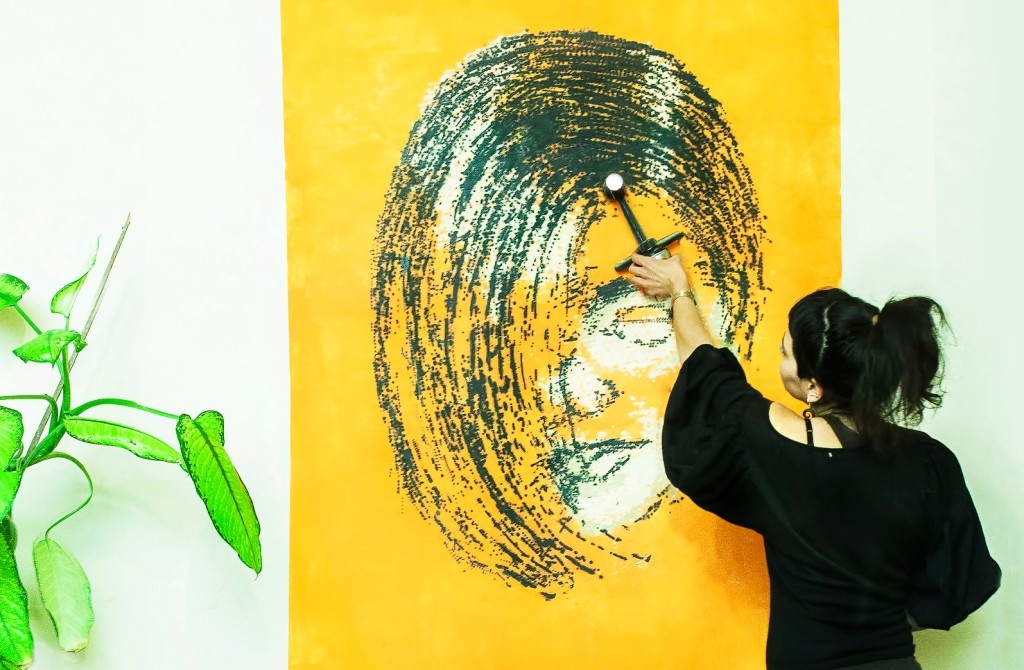 Now looking back, he describes three highlights – the BuildIt investment, the TechCrunch meetup with Mike Butcher and TechCrunch in San Francisco that really put them on the map. It was the meetup event where the team particularly caught Butcher’s attention, who then granted them the opportunity to pitch in December 2015 at the TechCrunch Disrupt booth in London, where SprayPrinter’s worldwide network saw its limelight. “It was an influential event for us, where we received a lot of strong feedback and awesome contacts, which we still use,” Murutar notes.

Patzig, on the other hand, feels especially strong about the recognition they received in the TechCrunch event in London where “pitching to different people experienced and knowledgeable in the industry, you see how excited and inspired they are by the idea, and inviting us to pitch elsewhere strongly raises our faith. Basically, what we are doing is heading in the right direction”. 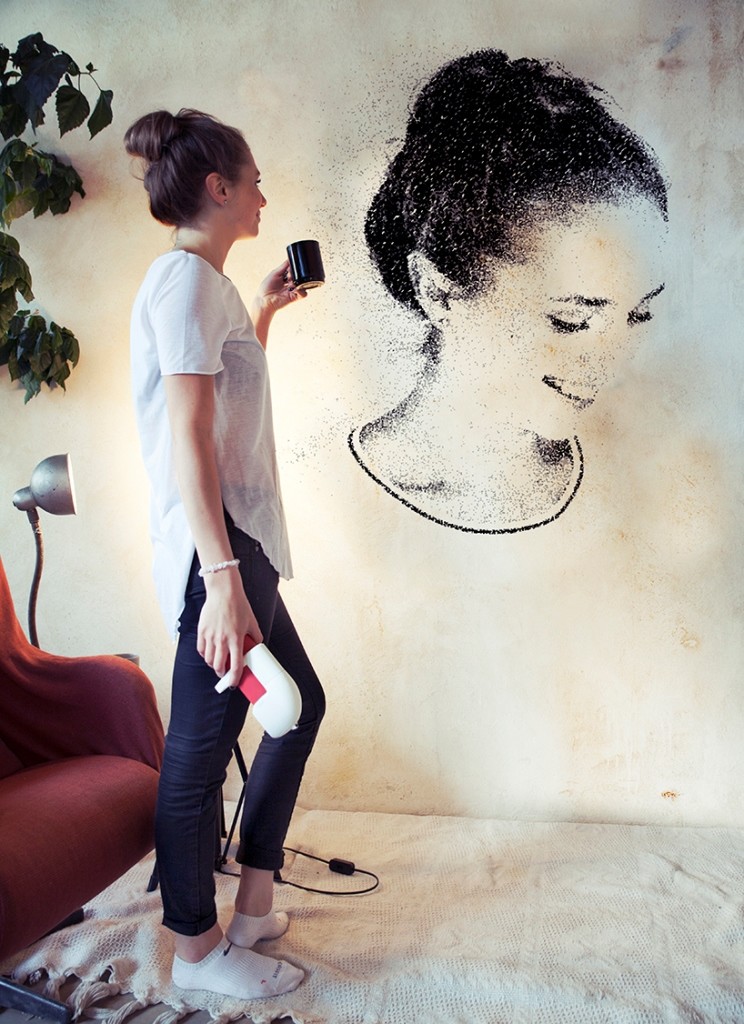 In the near future, another investment will be sealed which will further the process of two very expensive developments, “in that the mobile app would work efficiently and the product’s mechanical parts mechatronics would be fixed and economically usable. All of which is a major expense”, Murutar explains. He states that because the technology is so universal it enables the business to widen its opportunities and implement in various business sectors. “My vision is that in five years’ time we will be big in the market, while in 10 years we would have completely changed the production of finished goods.”

The team plans to collaborate with different companies, like Toppan with headquarters in Tokyo, who are partners with Mercedes and Coca-Cola. Murutar adds that they also continue to work with focus groups and designers so as to validate their decisions. “For instance, one last case was when the person testing it, fell for it and bought it. Out of blue we had a card terminal with us to take the pre-payment.”

“It is this way that we can learn how to improve the products. Many interior designers are over the moon about the product. We want to collaborate with them. When the value of SprayPrinters as a business grows, so does our network,” Murutar asserts. 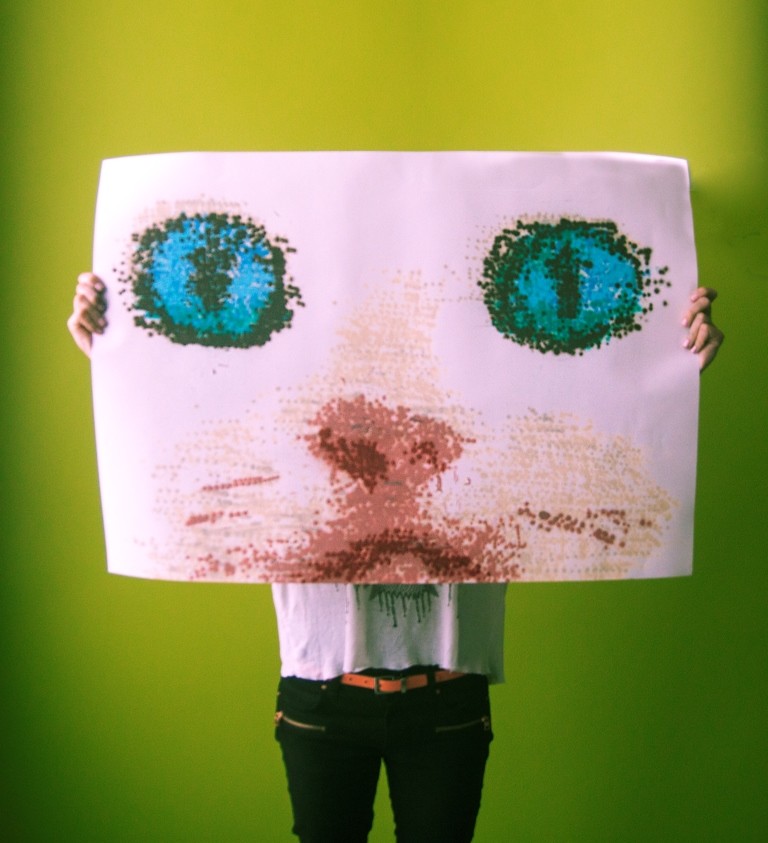 Patzig adds that “spray equals graffiti” in street art, and that spray colours have gained greater recognition as outdoor decoration.

The crew aims to change public perception with a demonstration of spray paint on the facade of their office in Tallinn – let Joala unleash his creativity and use the walls like a playground.

Katre Laan is curious as a cat and enjoys meeting new people. When she is not writing she will be in a yoga class or reading. She is not a fan of TV but is addicted to the Game of Thrones.