In the late 70´s, the members of innovative German band Kraftwerk decided that, for their concerts, they would send look-alike robots to perform, instead of doing the hard work themselves. Kraftwerk’s robots, although looking cool, were basic and could only move their “arms” up and down, and their “heads” sideways. About 30 years later, Heikki Haldre and Paul Pallin, CEO and CTO of Fits.me respectively, found a way to produce a robot in Estonia that rather than just moving its arms, actually changes its body shape.

Haldre and Pallin don’t call them robots though – they call them Fitbots. And instead of playing music on stage, the Fitbots have got another purpose – to make sure that online customers of various retail chains around the world buy perfectly fitted shirt or suit, according to their exact body measurements.

Four years ago, when entrepreneur Haldre got less and less time to go for fashion shopping, he became a more avid online shopper. The problem he found though, was that it wasn’t that easy to find a perfectly fitted shirt or suit when buying online – an issue made more complicated by the fact that the meaning of small and large size can be light years apart in different countries and continents. Hence he and Pallin came up with an idea to invent a new solution – to find out perfect fit by creating and using specially modified robots which can change their body shape. 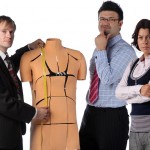 With a development from  Maarja Kruusmaa, professor of biorobotics at Tallinn University of Technology, Laboratory of Intelligent Materials and Systems at the University of Tartu, and Europe’s largest body scanning and anthropometry research company Human Solutions GmbH in Germany, a new kind of robot was born – named “Fitbot” by Fits.me entrepreneurs. At first, a “male” version was made – as according to Paul Pallin whose task is to „tame“ their Fitbots in Tartu, Estonia “It takes much more complicated biomechanics to produce a “female” Fitbot.”

Fitbots have artificial muscles able to mimic the shape and size of any body type, in almost 100 000 shapes. They are electric and are controlled by sophisticated software. Artificial skin has also been used to make Fitbots look like humans.

Fits.me business model is thus based on this: they “implant” their software on their client’s (usually large fashion chains) online store page, where the Fits.me’s Virtual Fitting Room would appear. An online shopper would then enter his or her basic measurements – height, neck, chest, waist, arm length and torso length. The fitting process is implemented in the software based on the thousands of shapes worked out by Fitbots – which are physically dressed in each item and each size of clothing by the retailer. Shoppers can “try on clothes” in the virtual fitting room, where they will be shown an image of a chosen item and how they fit their body shape. Fits.me charges the retail chains based on the usage of their software online, taking about 25% cut from a retailer’s profit.

Although somewhat slow in their expansion due to sophisticated development of Fitbots and backing software, Fits.me is now using their virtual fitting rooms with about 10 retail chains in the UK, US, Germany, and Italy. More famous ones include Thomas Pink and Hawes & Curtis in the UK, Otto in Germany, and Ermenegildo Zegna in Italy. Vogue fashion magazine picked the company as one of the 100 most influential names in the digital fashion world in their 2012 Online Fashion 100 power list. Their expansion was also slowed down due to lack of female version of the robot – something which they solved this year with an introduction of female Fitbot.

With the lack of similar products currently on the fashion market, Haldre and Pallin are positive about the future:”While in 2000 only two percent of clothes were bought online in developed countries, the share is now 10-13 percent and it is expected to increase to 35 percent by 2020.” “Our virtual fitting room will help to reduce the returns for the retailer by 35% on average”, they claim. And according to Heikki Haldre, there´s another wild card apparently hidden in the pack:”We also collect the customers body measurements and obviously the data insights are invaluable as we are literally the only technology that provides the retailers data on what the customers do inside the fitting room.”

An extra 1,5 million euro venture capital from the Entrepreneurs Fund this year prompted Fits.me to move their HQ from Estonia to London, UK – to sell their service more aggressively around the globe, while their 14-strong Fitbot force and R&D is still based in Tartu, Estonia.