Estonia, starting from low-grade technological advancement, has been outstandingly successful in building a modern and hi-tech e-government system that is envied by the international community. This article will describe the background of the journey Estonia undertook.

The period from the end of the 1980ies to the beginning of the 1990ies was full of changes for several countries: for countries that had been annexed into the Soviet Union; for the ones that had been under the influence of the dissolved powers; and for others adjusting to a changed world order. Estonia was one of countries that were occupied by the Soviet Union during the Second World War. In addition to the fifteen “Soviet” states, there were also other nations – satellite states that were a part of the so-called “Eastern Bloc”.

Estonia, as also others, faced a number of difficulties that included issues such as forceful political integration, social welfare and economic and technological stagnation. Extensive literature has been written about the first three mentioned problems, but not much is written about technological issues in Estonia during the transition period. In particular, little has been written about the evolution of state information systems and the evolution of e-government in Estonia.

The level of technological advancement in Estonia during that period could be defined as low-grade. Estonia’s IT environment was counted as “typical of the region”. Estonia lacked “technological conveniences” that were taken for granted in Western countries, eg the telephone system functioned poorly.

Therefore, Estonia’s case is interesting because, in comparison with other countries, technological advancement happened later than in the Western world. While others were 10 or even 20 years ahead in the development of e-government, Estonia was still trying to find its path. It is interesting to witness a country that started its technological processes so late but has reached the same level of development than other (wealthier) states. Estonia could be considered fortunate to have started building its information and communication technologies in an era when the internet was just in developing stages and thus could take advantage of its newly-found functionality in implementing modern technologies.

In order to most efficiently explain the phenomenon of e-government in Estonia, it is necessary to identify what e-government means. It can have a range of meanings shaped by different understandings of state information systems and the paradigms of information technologies. The definition of e-government can also be affected by its historical definition and already developed concepts. Also, its definition is influenced by the political and social context of where it is operating and by different stakeholders’ perceptions of it.

Estonia was one of many Eastern-European countries that were occupied by the Soviet Union during the Second World War and remained so for over half a century. Similarly to other contemporaries, Estonia had political, governmental, social and economic systems that were all Soviet, that needed to be restructured after Estonia regained its independence on 20 August 1991. Numerous necessary reforms derived from pragmatic rather than ideological reasons. Some of the challenges were related to implementing liberal economic policies, transforming the political ideology so that it would be acceptable to the newly re-structured modern society, integration to the Western community and dealing with the socio-economic outcomes of the collapse of Soviet institutions, to name a few.

Estonia’s success in the post-occupation period was greatly moulded by Soviet ideological influence. All Baltic countries underwent similar structural, political, social and economic integration into the Soviet Union; however, some differences can, nevertheless, be brought out in their experiences. Firstly, political integration, which was controlled by Moscow’s centralised rule. As a sign of the relative ineffectiveness of centralisation in Estonia, dissident activities and protests against the Soviet rule were more widespread in Estonia than in other Baltic nations to some extent. Secondly, cultural integration through Russification and the compulsory learning of the Russian language was less successful in Estonia. Thirdly, economic integration was especially centralised as autonomous economic decision-making was strictly limited and large-scale technologies were implemented together with the collectivisation of agriculture. Estonia had a lower share of large-scale industries and Soviet Union-wide enterprises than other Baltic contemporaries and that, in turn, gave an advantage for re-structuring the economy after the occupation.

However, Estonia had many similarities to other post-Soviet countries in the main aspects of information technology. For instance, the main problem in Estonia, similarly to its contemporaries, included technological rather than managerial aspects. There was much to be learnt in order to be competitive in a constantly changing technological environment. Furthermore, as organisational dependence on information technologies was increasing, Estonia was determined to implement hi-tech solutions as soon as possible and thereafter earned the nickname “E-stonia”.

From the Soviet-era Institute of Cybernetics to X-Road network

Estonia did not have a mentionable supporting information infrastructure to assist in implementing hi-tech IT practices. Nevertheless, one of the first note-worthy events was when the Institute of Cybernetics was established in September 1960 as a part of the bigger Academy of Sciences in Soviet Estonia. While other analogous institutions in the Soviet Union were working on mathematics and engineering tasks, the Estonian institute concentrated on computer programming and multidisciplinary fields. Although Estonia’s positive experience in that aspect differentiates it from other contemporaries, it is still obvious that Estonia was illustrated by a relatively weak IT infrastructure that arose from the lack of economic development caused by communist suppression. Also, it must be noted that obtaining reliable literature on pre-existing information infrastructure in Estonia is difficult if not impossible.

In addition to the relatively unique Institute of Cybernetics, some relevant details and events in the evolution of Estonia’s electronic government should be brought out. In 1993, a strategy paper was prepared by the IT community for establishing foundations and principles for the management of modern, well-functioning state information systems. Subsequently, a specialised IT department was established in the central government and additional finances were allocated for all IT expenditures at the various government agencies. Furthermore, the development of e-government and information and communication technologies in general was moulded by a number of laws. The first was the law of private data protection in 1996; second, the law of databases in 1997; third, the foundations of informatics in 1996; fourth, the law of identification documents and digital signature in 2000; and fifth, the foundations of information politics in 1998.

Government IT procurement was subsequently unified and these efforts concluded with the launch of a government wide backbone network EEBone (“Peatee” – throughway in Estonian) in 1998. The network joined governmental units with secure access to the internet and intranet. Additionally, the X-Road network was implemented in 2001 that, in turn, enabled a diverse range of government databases to communicate with one another. It allowed government officials as well as individuals to access information in these databases. 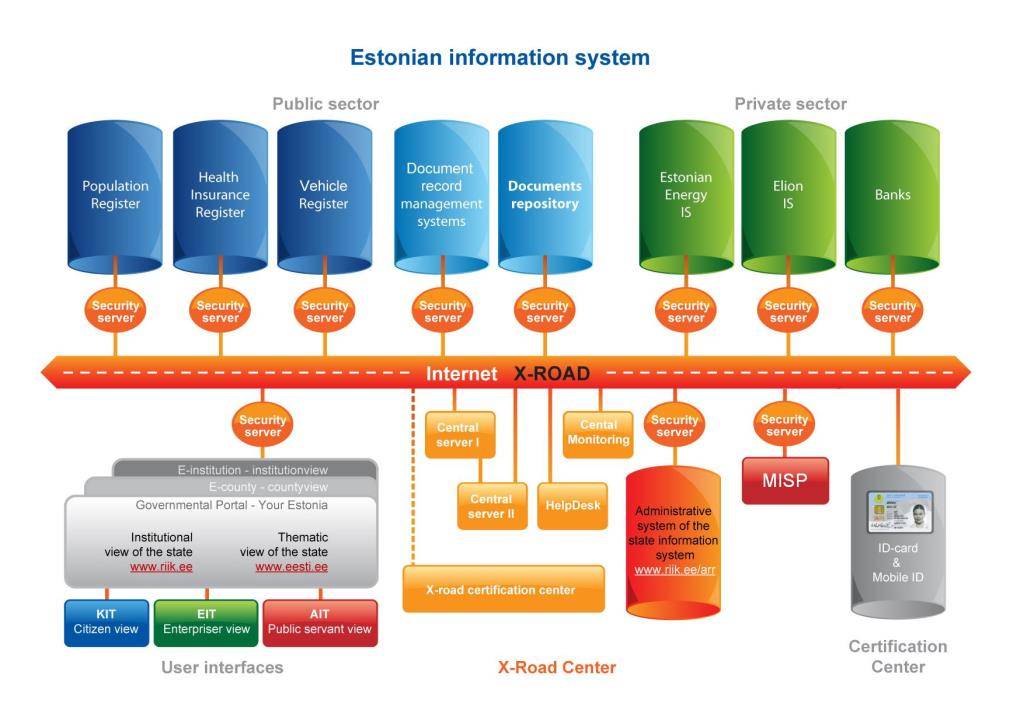 The banking sector benefitted from the liberal economic regime and sound financial policies. That, in turn, became an influential IT innovator by introducing online banking in 1996. The system was simple, of high quality and secure, and that attracted the majority of internet users to become its customers. Subsequently, these qualities lead many state agencies to use the identification verification system in online banking. That enabled government services to work online. Since 2000, Estonians have had the opportunity to file their taxes online using identity verification in the online banking system. A larger number of services became accessible through online banking systems, eg buying a bus pass online, paying for utilities and phone service, and participating in local and general elections. In addition, the identification system allows its users to identify themselves through private sector partners’ websites by using the same system based on online banking.

The role of governments is constantly changing and the functions of a government are congregating as increasingly more services and transactions are expected to be delivered in a more efficient way. Electronic government, a concept that initially emerged in the public administration of industrial countries, was developed as a response to these expectations. Furthermore, e-government has become increasingly relevant in delivering efficient services and value in public administration, central government and restructured state information systems. ICTs are helping to achieve these emerging goals by providing new and innovative solutions and by supporting governments in integrating and enriching the ways communication flows both locally, and globally.

Estonia’s experience has shown an example of a novel country that has implemented modern e-government practices in a short time period with limited resources. It is a case of a country that has seemingly built its information infrastructures from scratch, although having access to know-how and the possibility to import computer technologies. The circumstances and technological advancement that Estonia had 20 years ago provided unique possibilities and solutions that cannot be copied in the current, technologically different time. However, it can be assumed that the importance of e-government systems continues to increase, and thus, this case provides valuable lessons on how starting from scratch and while having limited resources one can still achieve successful results.

This paper was initially prepared as the author’s Master’s thesis.

Regina Erlenheim graduated from the University of Edinburgh with a MSc in Science and Technology studies. Regina is passionate about travelling, digital revolution and e-government. She works as a lecturer at the TalTech.

4 thoughts on “Starting from scratch: The case of e-government in Estonia”