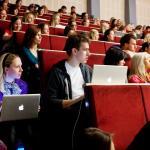 The Intelligent Community Forum (ICF), based in New York, has named the 2013 Top7 Intelligent Communities of the Year. The Top7 list includes three from North America, two from Taiwan and two from Europe, including Tallinn. “The Top7 communities of 2013 have made innovation – based on information and communications technology – the cornerstone of their economies and fostered economic growth through high-quality employment, while increasing the quality of life of their citizens,” said Lou Zacharilla, ICF co-founder in announcing the list at the Pacific Telecommunications Council’s annual conference (PTC’13) in Honolulu, Hawaii, USA.

According to ICF, these centres demonstrate how to embrace technology in order to gain several advantages including new jobs. A study this month from an arm of the World Bank says the key to creating jobs lies in dealing with four key issues; weak investment and limited financing as well as poor infrastructure, and insufficient skills training. All of these issues are addressed in the strategies of Intelligent Communities.

Economic uncertainty tops the list of concerns for many global communities, The International Labour Organization notes in a January 2013 report that global unemployment was on the rise again in 2012 and forecast it will likely continue to rise in 2013 through to 2017. The Top7 demonstrate what can be accomplished by embracing information and communications technology to power growth, address social challenges and preserve and promote culture.

Among Top7 accomplishments: Tallinn has expanded an industrial park by 50 per cent to 250 companies – making it the largest knowledge-based development in the Baltic region. Columbus created 29,000 new jobs in the last two years, while Oulu created 18,000 new technology jobs in the last five years. Taichung City uses ICT to help farmers boost yields and the city’s shared cloud-based system enables small firms to reduce production costs and time to market. Toronto has the largest urban renewal project currently in development in North America: Waterfront Toronto. This new community will provide Internet at 500 times the speed of conventional residential networks, a foundation that will propel Toronto to the upper levels of intelligent communities.

In a more detailed report about Tallinn, ICF says the following: Estonia saw a major boom from 2004 to 2007, as loan capital poured in from Scandinavian countries. The country’s rise from Soviet occupation, beginning in 1991, had been miraculous, but the wave of investment was more than the market could usefully absorb. When the financial crisis came, it hit Estonia and its principal city of Tallinn very hard. Several thousand companies went bankrupt and layoffs, particularly of the low-skilled, rose into the tens of thousands. Yet beneath the froth, Tallinn has put into place the foundations of ICT-based growth and generating a strong comeback.

Tallinn’s first wave of IT industry growth was driven by national government spending on an amazing range of e-government applications. Its return to growth has a more sustainable basis in education and entrepreneurship. With 23 universities and technical schools, Tallinn has the resources for a knowledge workforce: it has focused now on expanding access and filling demand for ICT and digital content skills. From 2007 to 2011, Tallinn Technical University doubled participation in lifelong learning programs.

The city is expanding public access computer sites and training programs for the disconnected, while a public-private project called EstWin will extend 100 Mbps broadband throughout Estonia by 2015. To support local startups and attract talent from beyond Estonia’s borders, Tallinn and its educational and business partners have launched multiple incubators targeting creative services, medical and biotech, mechatronics and ICT.

Europe’s first gaming accelerator opened in Tallinn this year, and its Ülemiste City industrial estate is expanding 50 per cent to house 250 companies, making it the Baltics’ biggest knowledge-based development. When the 2008 global economic crisis struck, Tallinn moved fast to launch aid packages to get residents and companies through the bad times with their skills and ambitions intact. The value of the city’s short-term response and its long-term strategy will be proven in coming years.

The Intelligent Community Forum seeks to share the best practices of the world’s Intelligent Communities in adapting to the demands of what it calls “the Broadband Economy” by conducting research, hosting events, publishing books and newsletters and producing its high profile international awards program. ICF’s mission to make “place” align with prosperity has drawn the attention of global leaders and thinkers everywhere. The ICF Foundation consists of over 100 communities, cities and regions that have been globally designated as Intelligent Communities and which participate in an ongoing dialogue to strengthen local economies. For more information, go to www.intelligentcommunity.org