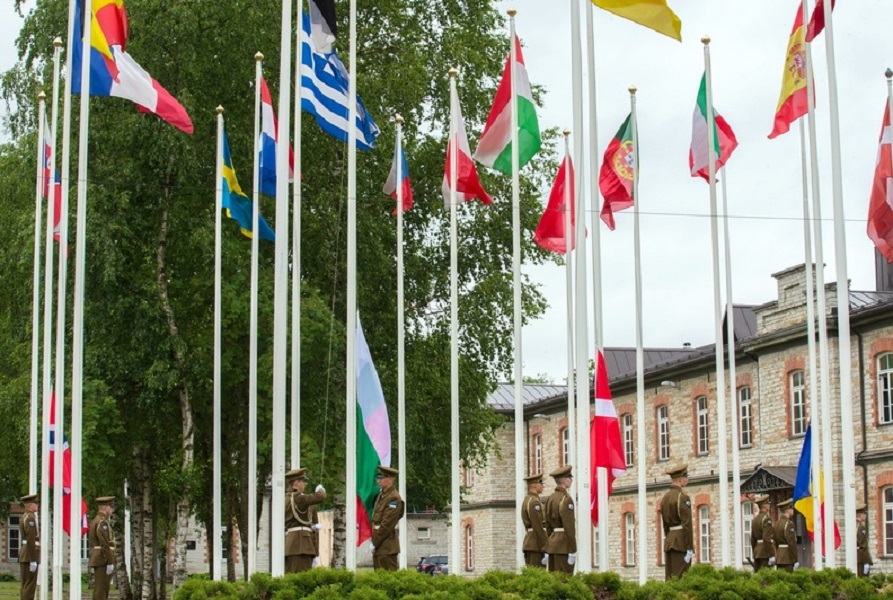 The Tallinn, Estonia-based NATO Cooperative Cyber Defence Centre of Excellence (CCDCOE) has welcomed four new members – Bulgaria, Denmark, Norway and Romania; the centre now has 25 member countries, becoming the biggest among 25 NATO-accredited centres of excellence. “In eleven years, we have grown from seven founding members to the …

Estonia has, for the first time, been elected a non-permanent member of the United Nations Security Council. The vote took place on 7 June at the United Nations (UN) headquarters in New York City. All 193 UN member states were in present to cast their votes. Estonia was elected a …

US Marines who arrived in Estonia ahead of the 47th annual maritime exercise, Baltic Operations (BALTOPS), are visiting schools and local communities to teach youths about first aid, orienteering and teamwork. The Marines arrived in Tallinn on 25 May ahead of the BALTOPS exercise that will take place in Sweden, …

The Tallinn-based NATO Cooperative Cyber Defence Centre of Excellence has launched an interactive web-based resource for legal professionals and students, called the Cyber Law Toolkit. The toolkit was launched at the 11th Annual Conference on Cyber Conflict – or CyCon 2019 – in Tallinn, Estonia, on 29 May. According to …

The United States and Estonia signed a five-year defence cooperation agreement at the Pentagon in Washington, DC, that will continue the cooperation between the two countries through 2024. The document was signed by the acting assistant secretary of defence for international security affairs, Kathryn L. Wheelbarger, and the Estonian undersecretary …

From 28-31 May, Tallinn is hosting the 11th International Conference on Cyber Conflict – or CyCon, as it’s known – and Estonian World is providing a live stream of some of the keynote speeches at the conference. CyCon is bringing together over 600 key experts and decision-makers from the global …

An email address with the Estonian domain was used to make a bomb threat to the Brodsky synagogue in Kyiv, Ukraine; people were evacuated from the temple and no explosives were found. According to the Estonian newspaper, Postimees, the email with the bomb threat was sent from motorola_dnr_1488@mail.ee in the …

The Estonian Institute of Historical Memory opened an exhibition about the international crimes of communism at the former Patarei prison in Tallinn.

The exhibition, “Communism is Prison”, educates visitors on the ideology and international crimes of communism as well as giving hindsight into the history of the former Patarei prison complex – a sprawling concrete and brick structure, close to the Tallinn city centre – that used to house hardened criminals and political dissenters alike. Originally built as a sea fortress in 1820, Patarei was used as a prison until 2004.

The exhibition area covers 1,200 square metres (13,000 sq ft) in the east wing of the building, where the authentic prison interior and the prisoners’ walkways in the courtyard have been preserved.

“The exhibition is based on Patarei’s multi-layered and tragic history. It was used by the Soviet Union’s communist regime and, for a shorter period, Germany’s Nazi regime to imprison thousands of innocent people,” Sandra Vokk from the Estonian Institute of Historical Memory said in a statement. “The aim of the exhibition is to raise awareness of the inhuman nature of communist regimes.”

Among other displays, the exhibition includes pictures of the Gulag – the Soviet forced-labour camp-system that was set up under Vladimir Lenin and reached its peak during Joseph Stalin’s rule from the 1930s to the early 1950s – by the imprisoned Jewish artist Solomon Gerschow. It also tells the stories and the destinies of the repressed and the arduous everyday life of an occupation-era prisoner in Patarei complex.

“The exhibition area, which is focused on the past, actually serves the future and reaches far out of Estonia, as we can truly appreciate the value of freedom and human dignity only when the ideologies and regimes that disregarded them are thoroughly known in the world,” Vokk said.

The exhibition is the first manifestation of the International Museum for the Victims of Communism that will be established in the former Patarei prison. Until the museum project is finished, the exhibition area is open to visitors during the warmer months.

The communist terror was responsible for over 22,000 Estonian deaths – people who were murdered or died due to inhuman living conditions in imprisonment.

Cover: The exhibition’s entrance (pictures courtesy of the International Museum for the Victims of Communism).

On 18 May, an aircraft of the Russian navy violated the Estonian air space.

The plane, a Tupolev 154, entered the Estonian air space without permission near the island of Vaindloo in northeastern Estonia, in the middle of the Gulf of Finland.

According to the statement, this was the first violation of the Estonian air space by Russia in 2019.

The Estonian foreign ministry summoned the Russian ambassador in Estonia and handed him a diplomatic note.

Vaindloo is a small island located in the Gulf of Finland in the Baltic Sea. It belongs to Estonia and it is the northernmost point of the country. It’s located 26 kilometres (16 miles) north of the Estonian mainland. The island is notable for its functioning lighthouse that was built in 1871.

Russian planes frequently violate the Estonian air space, especially near the island of Vaindloo. At least four violations happened in 2018.

The Tupolev 154 aircraft is a Soviet-made three-engine medium-range narrow-body airplane designed in the mid-1960s. It has a range of 5,280 kilometres (3,280 miles).