We Canadians share a number of things with those in the Nordic countries: a love of hockey, a tradition of social democratic values and a cold, dark, snowy winter. Despite our national similarities, however, it’s unlikely that many Canadians get to experience the sauna ritual as it’s practiced regularly in Finland and Estonia.

In Canada, you could find yourself in a tolerably heated sauna, amid bathing suit-clad strangers, after a swim at the local community centre. In the northeastern corner of Europe, it’s typical to have a small private sauna either inside one’s home or at least somewhere on the property. In Karlova, our neighborhood in Tartu, many families heat up their sauna every weekend, filling the air with the distinctive, cozy scent of a fireplace.

We were thrilled that our rented apartment included an electric sauna and it didn’t take us long to collect an array of sauna-related accessories: exfoliating mitts, a bunch of birch branches, a water pail and ladle, a plastic tub for soaking our feet, multiple sets of towels for guests and so on. We came to practice a weekly sauna ritual of our own, in which we took the time to sweat out stress, catch up, reflect on the past week, plan for the week ahead and get clean.

Early on in our trip, our Estonian friend Kerly told us that wood-burning saunas are much more authentic than electric ones, and invited us to her family’s home to experience their weekly ritual. By the time we arrived, the sauna had been pre-heating for hours, and we were told to strip down and head into the shower room to rinse off. After a quick wash, we sat down in the sauna and began to acclimatise ourselves to the dry, enveloping heat (typical sauna temperatures range between seventy and one hundred degrees Celsius). 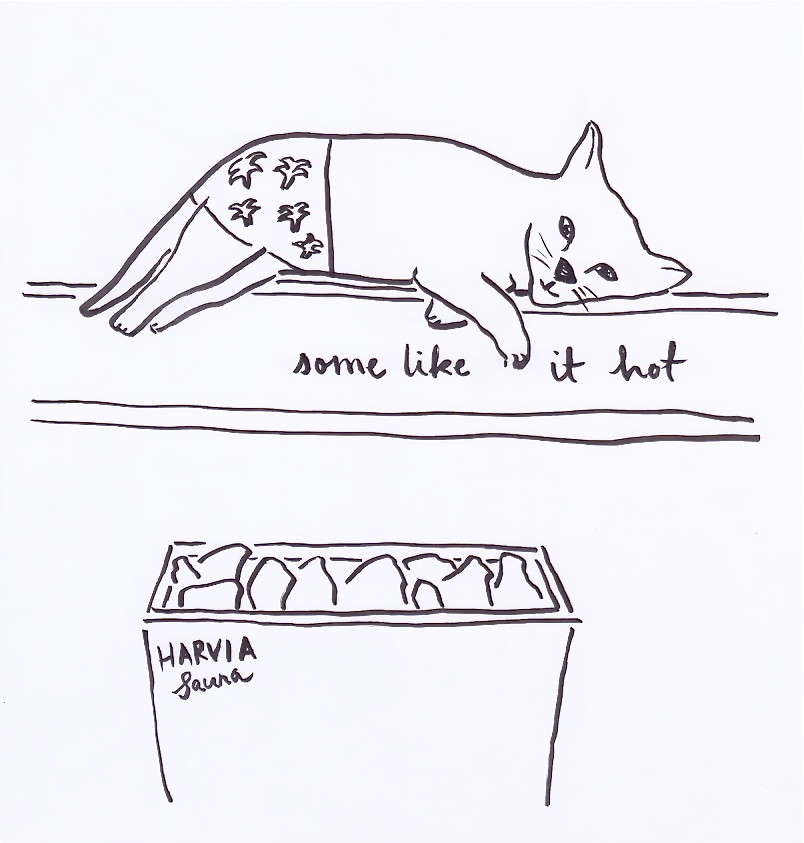 Just as we were getting comfortable, Kerly began to prepare us for the next step in our sauna training. She was going to pour water onto the hot rocks, and when the steam moved from the stove to the other side of the sauna, she warned us not be afraid that the steam was burning our skin. We started to feel a bit nervous as she showed us how to maintain regular breathing despite the piping hot steam, by cupping our hands over our mouths.

Having adequately prepared us for this blast of steam, Kerly splashed a ladle of water onto the rocks, and an intense wave of heat reached each of us in turn, standing hair on end and making it difficult to inhale. We were subjected to a few more rounds of what we later dubbed the “heat demon” to build up our sauna stamina. 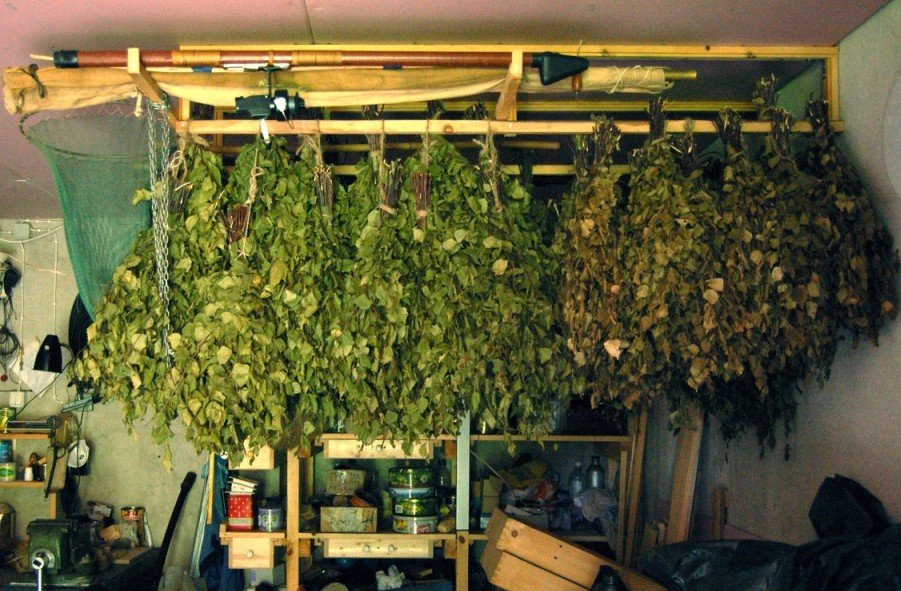 Back in the shower room, we filled buckets with water and got to scrubbing and exfoliating. Kerly explained that while the weekly sauna ritual is thought to physically and symbolically cleanse the body, it’s also considered a time for family members and close friends to discuss important matters. We asked how it is that Estonians (a notoriously reserved people) could be so uninhibited in their nudity – you aren’t likely to catch an Estonian or a Finn wearing a towel or bathing suit in the sauna – and she explained that nakedness has no erotic undertone in the context of this tradition, and instead functions as an equaliser. Social position and other outward signs of difference are understood to melt away with the heat.

A few weeks later, on a cloudy September day, we found ourselves on a large pontoon boat moored to the shores of Lake Peipus, Europe’s fifth largest lake. As seventeen Finns managed to cram themselves into the boat’s modest sauna, we felt as though we were witnessing some reverse Nordic version of the circus gag in which an improbable number of passengers emerge one-by-one from a miniature car.

The sauna smelled like a pot of herbal tea, an effect of our fellow sauna goers smacking each other with birch branches, thereby improving blood circulation. Although we’d only met most of this group of jovial Finns a few hours earlier, no one in their party was too shy to get naked, nor did they hesitate when it was time to trade the heat of the sauna for the shockingly cold lake water and crisp fall air. Remembering our sauna training, we joined the Finns in their spirited au naturel ritual, enjoying a memorable afternoon of sailing, eel soup and lots of sauna time. 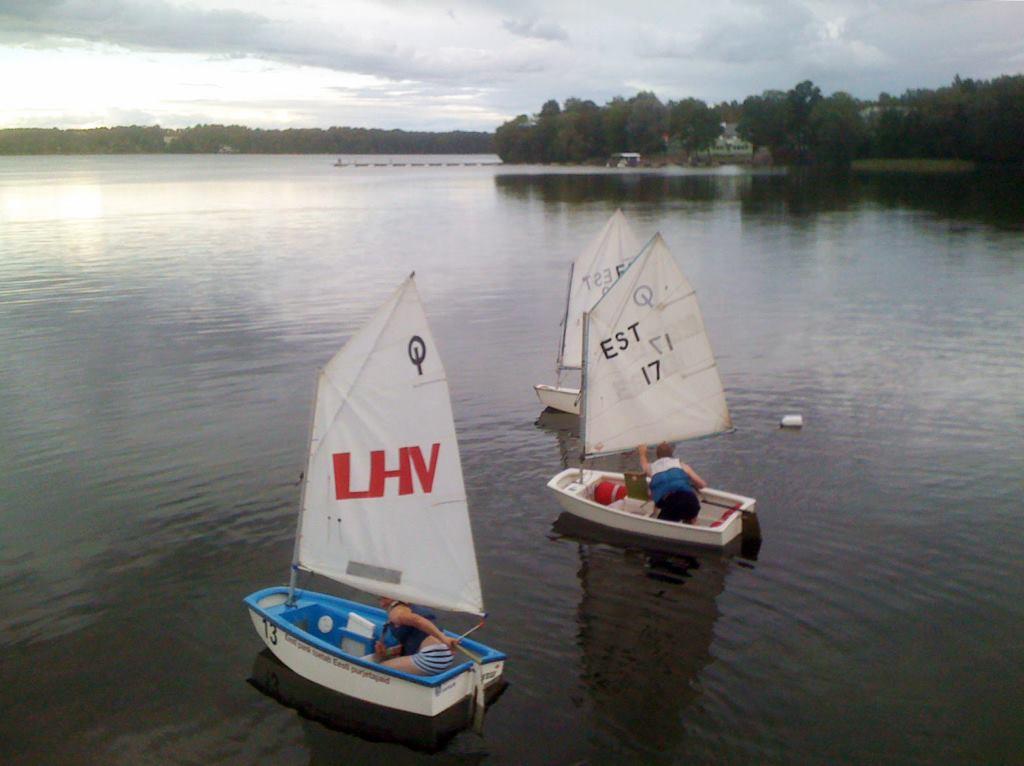 Our new friends affirmed the lessons we’d learned from Kerly about the sauna as a traditional space for talking openly among equals and the neutrality of sauna nudity. Not only does the Finnish and Estonian sauna tend to be much hotter than its Canadian counterpart, it has an important social component as well. Although we came to love our weekly ritual and what it stood for, we never learnt to appreciate that blisteringly cold shock of lake water in which Estonians and Finns seem to revel during sauna sessions. Guess some lessons are harder to learn than others!

This article was also published by The Proof newspaper in Chicago, USA. This is the third part in the series of articles, Lessons in Estonian culture for beginners. The first and second part can be found here and here. See also Lisa and Kristen Dobbin’s photo blog. Cover photo: the sauna-goers at the world’s largest sauna marathon in Otepää, Estonia (the cover photo is illustrative).

6 thoughts on “Lessons in Estonian culture for beginners 3: hot steam, cold water and the naked truth”