“Love in the 21st Century”, an exhibition by the Estonian Lithography Centre, displayed the works of eleven renowned Estonian contemporary artists: Kadri Alesmaa, Peeter Allik, Toomas Altnurme, Merike Estna, Kadri Kangilaski, Laurentsius, Marko Mäetamm, Mall Nukke, Reiu Tüür, Jaak Visnap and Jasper Zoova. The Estonian Lithography Centre and Kristi Roosmaa Tootell, the cultural affairs coordinator at the consulate general of Estonia in New York, brought the exhibition to the BOSI Contemporary Art Gallery from 15-25 January, during what happened to be one of the worst cold waves in a century.

Kris Lillemets had a chance to visit the exhibition as well as spend some time with Jaak Visnap to talk about life, love and Estonian art.

While trekking through the polar vortex-bit Lower East Side of New York, I found myself reminiscing over my high school years in Pärnu in the early noughties. The Estonian Lithography Centre had just been founded there, in a small house next to the St Elizabeth’s Church, and I still remember the bulky stones and colourful prints quite vividly. I can’t recall whether the occasion was a class trip or just me being culturally inclined, but in either case my teenage self would have giggled at the perspective of seeing an exhibit made by the same people, probably on the same stone plates, more than a decade later in New York. Amused by my inability to predict the future, I arrive to BOSI Contemporary Art Gallery to be greeted by the artist, Jaak Visnap. He apologises that Kadri Alesmaa did not make it that day due to the cold and other errands. Jaak and Kadri have been making lithography together for 15 years. In the process, they have also got married and had two kids. 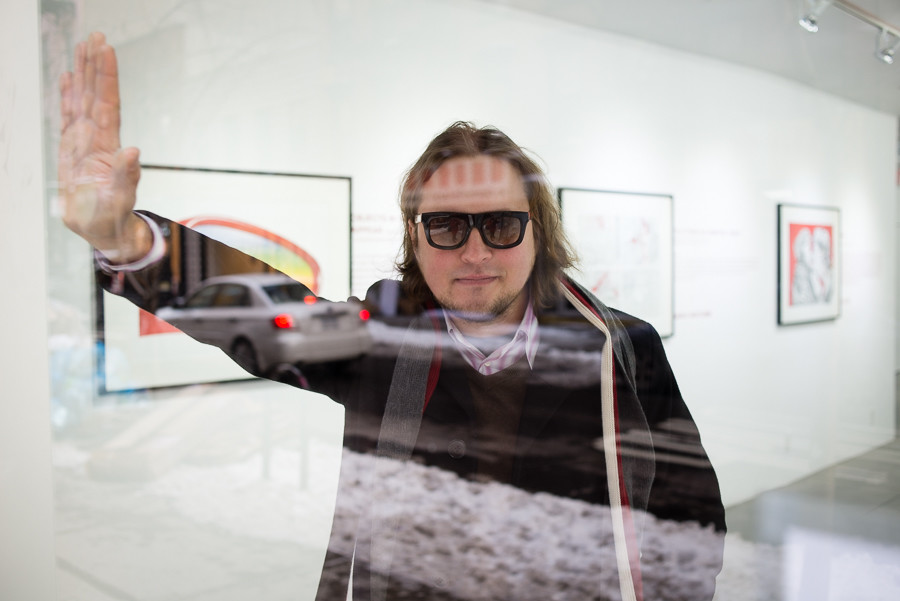 As we progress through the exhibition I inquire on the choice of the theme. Jaak explains that love, while possibly appearing a cliché, is timeless and intriguing and will always provoke opinions, interpretations. In the 21st century, love as a concept has transformed more than ever before. The society is increasingly urban and online. Mass media and globalism have changed the way we perceive love, expanded its borders and robbed it of its innocence. Appropriately, we happen to be standing by Mall Nukke’s “21st Heart Beat”, which to me is probably the darkest piece of the exhibit. It shows an artificial heart in a whirlpool of something deep, disturbing, inky and somehow carnal. I absolutely love it. 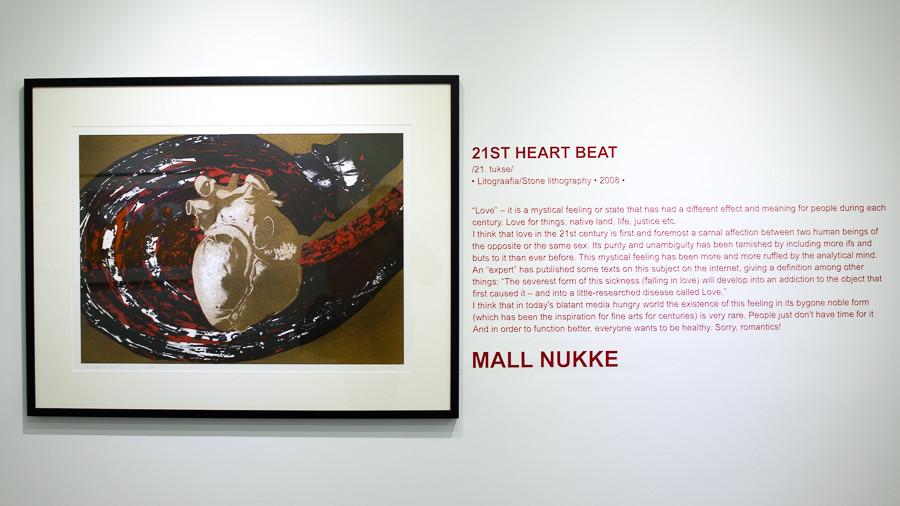 “Baltic Chain” by Jaak Visnap himself takes a stab at the porn-induced omnipresence of graphic physical love by picturing three young Hispanic-looking girls from the newly independent Baltic States exploring each others’ sexuality while sporting identical bleach blonde hair and spray tan. 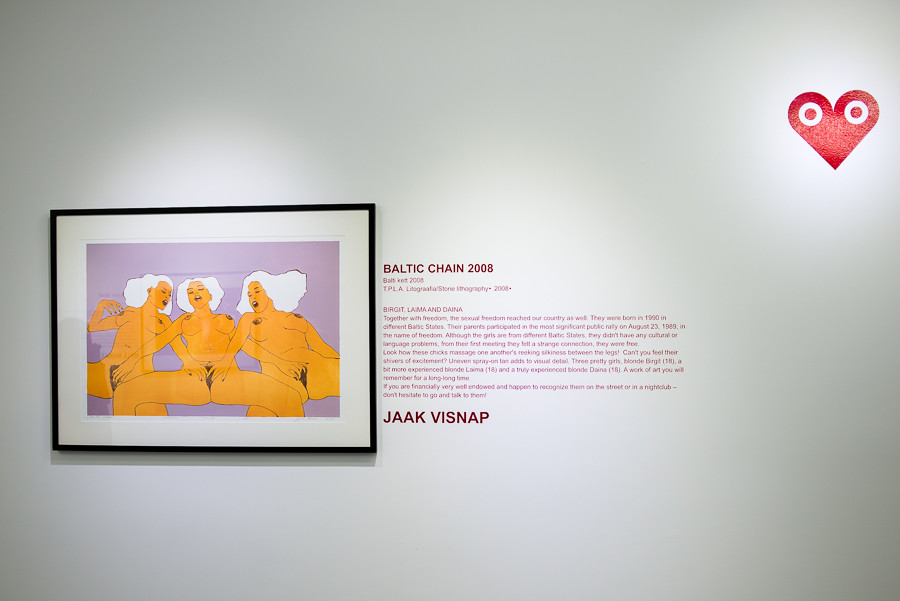 “Objects in the Mirror are Closer Than They Appear” by Kadri Alesmaa brings on an impending sense of doom, manifested by the approaching robot bunnies in the mirror, or perhaps some other form of cuteness. 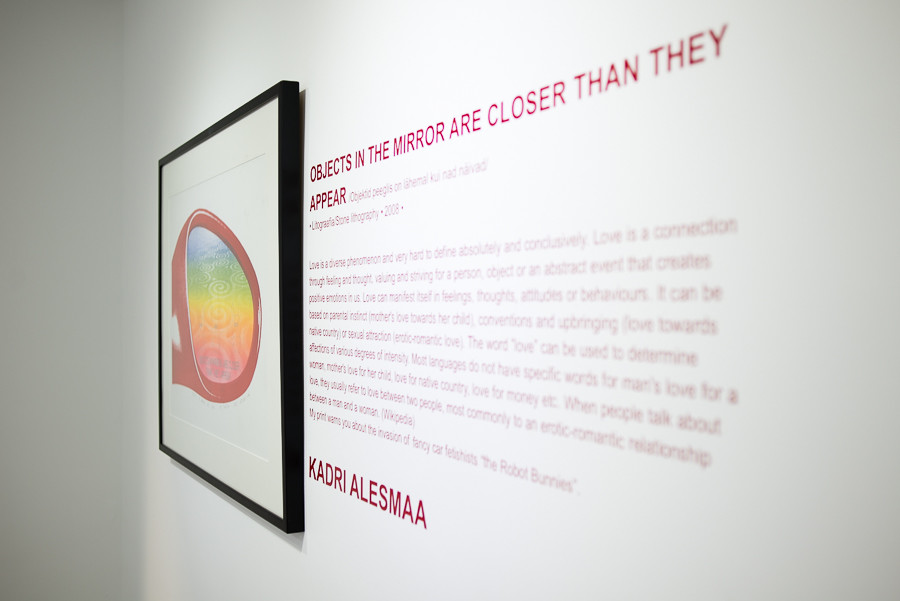 When I ask about feedback to the exhibition, Jaak is citing the gallery owner, Sandro Bosi, saying it has been really good. In New York, currently dominated by other types of media, it’s refreshing to see classic beautiful large lithographic prints through the lens of pop art. Another great review along with an in-depth explanation of the lithographic process can be found in this New York-based art blog.

Jaak compares being exhibited in the Big Apple to oxygen for the Estonian Lithography Centre and the artists they represent. In Estonia’s tiny art scene, where everyone knows everyone from artists to critics and administrators, it’s very important to occasionally get outside to see how things are done differently and gain experience. Among other cities “Love in the 21st Century” has also been exhibited in St Petersburg and Moscow in Russia, and Bristol in the UK.

The next evening we meet up in the New York Estonian House at an opening of a second exhibition by the Estonian Lithography Centre. This one is more low-key, geared towards the local Estonian population in the cosy atmosphere of their cultural hub in the city. The event brings together a decent crowd while Saku beer and Vana Tallinn liqueur lubricate discussions ranging from the Estonian art scene to purchasing pieces from the exhibition. Jaak, the soul of the party, holds a speech with several memorable quotes, such as, “Being an Estonian these days is an occupation. We need to do it professionally across the globe. A brand of Estonia, in arts or anything else, can only be cultivated by inspiring and successful individuals.” His goal is that there would be at least one world famous Estonian artist, soon, not in a 100 years.

The event also features a screening of the above short film created especially for the New York exhibition, starring Jaak creating a lithographic print. It’s educational, hilarious and self-deprecatingly romantic (yes, his kicks are indeed “pastlad”, the iconic Estonian leather peasant shoes). The film makes a great add-on to the exhibition since it can really be hard to fathom what exactly goes into such printmaking.

The technique that Jaak Visnap practices is old school. In modern lithography, most images are made using polymer coating applied to flexible aluminium plates, but Jaak’s tools of choice are 100-kg limestone plates like in the olden days when lithography was celebrated as the first medium to bring colour to mass printing. Most of the European masters of the craft are in their sixties or seventies and refer to the 35-year-old Jaak as the child prodigy. All eleven pieces in the “Love in the 21st Century” series were also printed by him, after the artists had painted them on the stones.

The passion for keeping the old technique alive is what brought him and Kadri to founding the Estonian Lithography Centre 12 years ago. Despite the occasional financial, institutional and motivational troubles they’ve managed to grow it into a strong brand and have introduced and popularised lithography to many in Estonia and internationally, including professional artists, the media and academia. 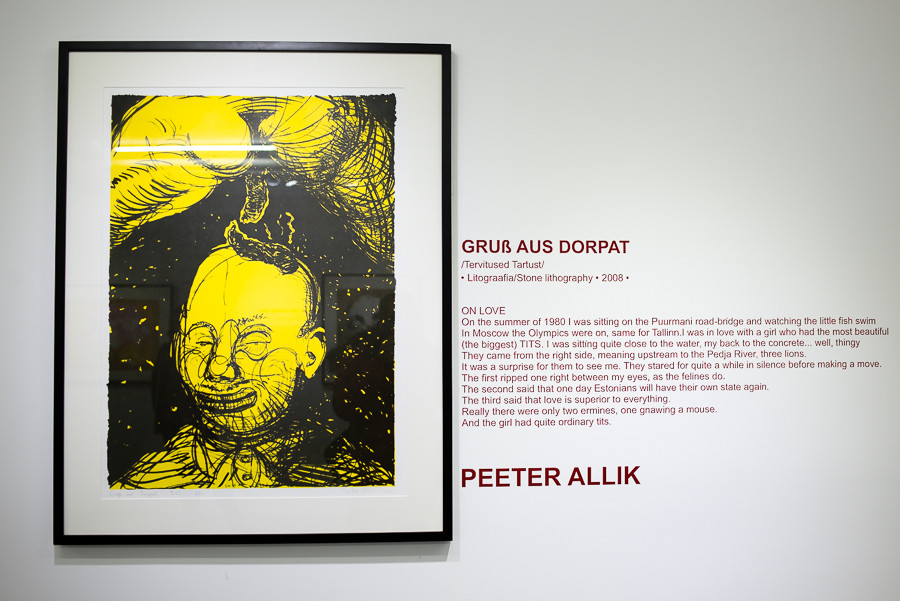 The morning after the Estonian House, I drag my very hungover girlfriend, who’s also an art (history) fan, to the gallery. She is pleasantly surprised by the straightforward crassness of some of the works and the wonderful balance stricken by bliss, nudity and muck. We pick our favourite pieces. Mine is “Fairytale 20 Years Later” by Merike Estna in its ironic post-disneyness. She chooses Reiu Tüür’s “Opera” – an ode to love that is innocent, tolerant and above politics, race, or religion.

We leave the exhibition feeling light and hopeful that Estonian art will become world famous and love will eventually conquer all. As we hike the empty blizzard-ridden streets towards the subway, I ask for her (American) input to my story about the past three days. After a brief thought she suggests I name it “TITS, Booze and Love: Estonian Art in NYC.”

I seriously considered it. 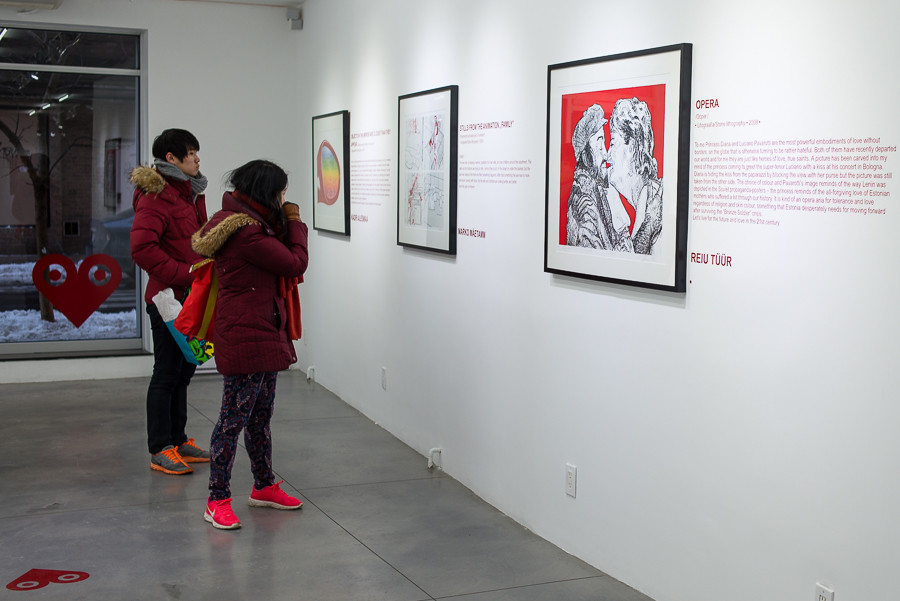