On 5 March, an Estonian art exhibition opens at the Abu Dhabi Art Hub, which is also the grand final for the Estonian Art Month project that took place during February. During the month, six Estonian artists were invited to live and work at the Art Hub and given the chance to explore and take part in the local Arab culture.

Although the United Arab Emirates is mostly known as a winter vacation destination for northern Europeans, the region is culturally very active and ambitious: three world-class museums – Louvre Abu Dhabi, the Zayed National Museum and Guggenheim Abu Dhabi – will be opened in a few years’ time.

The Abu Dhabi Art Hub was established in 2012, when the owner/founder Ahmed Al Yafei turned an old industrial building into cosy live/work space. Since then, it has become an international art centre, visited by many global artists. The intention of the Art Hub is to have a cross-cultural dialogues and through collaboration to learn from each other. 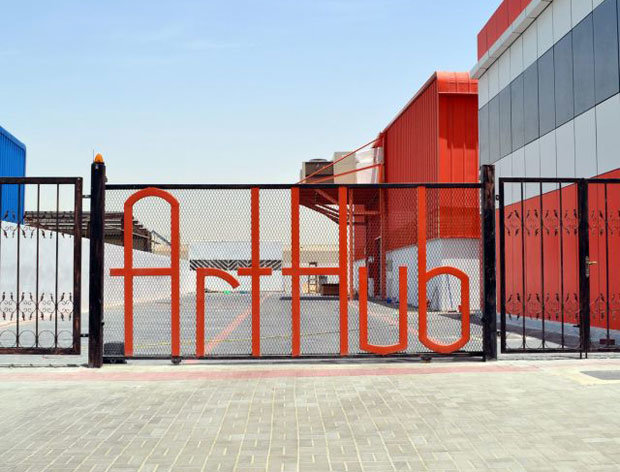 The initiator of the Estonian Art Month is Toomas Altnurme who has worked at the Emirates University since 2014. Five other artists, Katrin Karu, Tiiu Rebane, Jana Huul, Markus Kasemaa and Raivo Kelomees have joined him.

The Art Month has helped the artists get acquainted with the local art scene, as well as promoting Estonian art – they drove through the desert to see local art in Liwa oasis, while Markus Kasemaa guided a large drawing event at a local mall to draw attention to Estonian art at the Art Hub. 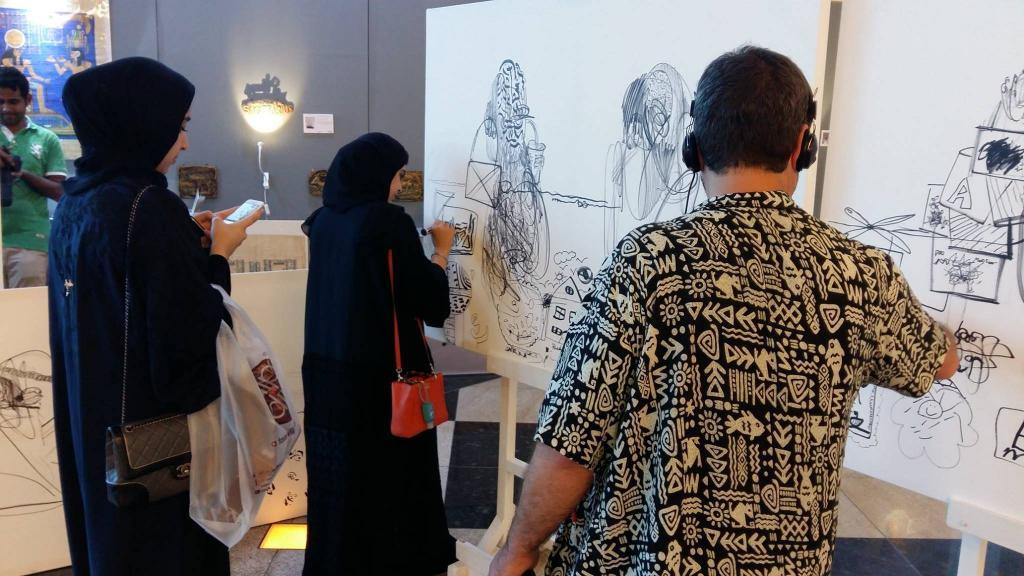 The artists had also exclusive access to the Louvre Abu Dhabi construction site. Raivo Kelomees explained that the building, designed by Jean Nouvel, was inspired by a typical Arab marketplace that is covered in palm leaves through which the sunlight oozes in – the building is constructed so that it will let in unsymmetrical, moving spots of sunshine. “There is a clear sense of strong direction and increased emphasis on world-class culture in the Emirates. As the place is culturally active and fast developing, it’s a good opportunity for Estonian artists and Estonia to be seen and recognised,” Kelomees said.

During the stay at the Abu Dhabi Art Hub, all the residing Estonian artists created at least three artworks for the exhibition. The most used mediums are paintings, but there also are sculptures (Jaana Huul and Toomas Altnurme) and video-installations (Raivo Kelomees). 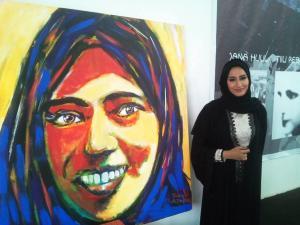 Toomas Altnurme is an internationally recognised sculptor, painter and installation artist, whose sculptures and artworks are in the collections of more than 50 countries around the globe – in museums, private collections, parks and public spaces. Since 2014, he has taught fine art at the United Arab Emirates University.

Altnurme´s works represent intuitive contemplation – praising light and sun. In his works, he tries to perpetuate positive energy and brightness. Through colours and symbols of luck, peace and balance, he attempts to build bridges between different cultures. 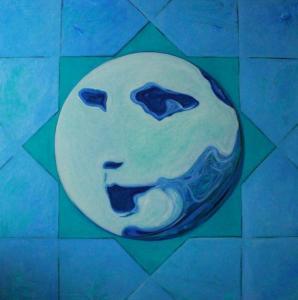 Tiiu Rebane started as an installation artist in 1994. In 1999, she got an MA from the Estonian Academy of Arts as a painter. She works with concept of room, existentialism and poetical documentary. Her works are presented in the collection of the Estonian Contemporary Art Museum, KUMU, and in private collections. Since 2013, she has worked as an independent art curator. The series of six works, made during her residency in Abu Dhabi, were constructed on the basis of pop art: on the findings of some distilled poetic images and geometric patterns which could characterise Arab insight, and on comparing these symbols with Estonian analogues.

Katrin Karu likes to create expressive colourful canvases. Her structural and large-sized paintings have been purchased by private collectors in Germany, France, Japan and Estonia. She graduated from the Tallinn University, studying art, technical drawing and advertising.

“I mostly paint large expressive paintings, using mixed media on canvas. Usually my subject is a human being – a woman; a human in solitude and in pain; their happiness, kindness and thoughtfulness. With every painting, I want to reach the point where they start to express feelings, to tell a story on their own, to embrace the harmony between brute force and tenderness,” Karu said to Estonian World. 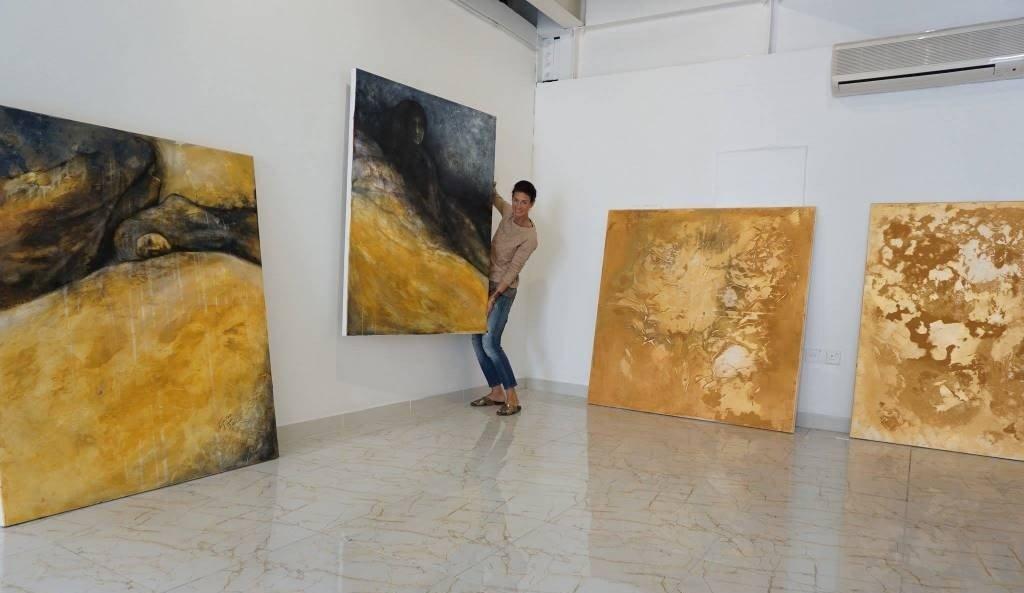 “Abu Dhabi and the rest of the land are very different from Estonia. The heat and dryness have created an opposite environment to the one I am used to. There is no luscious greenery, no forests. The people are open and talkative; the culture is rich in poetry and traditions. But I believe that deep down, we all have the same thoughts and feelings, joys and yearnings. People have so many feelings they’re unable to express. When you put those feelings on canvas, you make them real,” Karu explained.

Jana Huul is an artist, curator and an art education developer. She graduated from the Tartu Art College as a sculptor and received an MA in art pedagogy from the Estonian Academy of Arts. She leads one of the biggest galleries in southern Estonia and is also an organiser behind the project to introduce schools to the art world and artists.

Huul’s big passion is textile art as a medium, Nordic fashion and design. She embeds fragments and its influences into a form based art works. Huul is also inspired by world of patterns and rhythms, old cultural traditions, natural forms and cityscape.

She said the UAE has inspired her a lot, namely the rich, clear and monumental architectural forms of Abu Dhabi. In her current creation at the Art Hub, she focusses on architectural forms and connects Estonian handicraft with a world of archaic patterns. The artist has created textile forms that are inspired by desert houses and mosques – an archaic and magnificent play of symbols through colour spots.

Raivo Kelomees, an artist, critic and new media researcher, has a PhD in art history from the Estonian Academy of Arts. He is painter, designer of interactive artworks and writes articles on new media and art in general.

With his works, he tries give answer to questions like, “what is the past before past?”, “what would visual art look like without cultural influences?”, “what would be the most ancient form and shape you can imagine connected to Estonia?”

Kelomees has designed, 3D printed, 3D animated, drawn and painted different views of an invented, artificial fossil, which is based on real fossils found at places where oil shale is excavated in Estonia. These fossil forms are related to still the most important source of energy, fossil oil – plenty of which is found also in the United Arab Emirates. Kelomees’ project “Fossil” is a research and homage to these organic and fossil forms that are still sources of wealth and economic activity for many countries.

Markus Kasemaa is active in visual art (painting, drawing), conceptual art and artistic intervention. He is also business mentor and creativity lecturer (he recently talked at the “Innovation Arabia 8” conference in Dubai).

He is passionate about creativity and innovation. He promotes unconventional ideas, such as “buying art is crime against culture” or “bad art is good art”, under a set of concepts, which he calls “red pill of art” – an alternative practice of creation, distribution, experiencing and role of art. He ignores mainstream art system, rarely exhibits at traditional galleries, and prefers offices (Skype, Fujitsu, TransferWise), schools and streets. 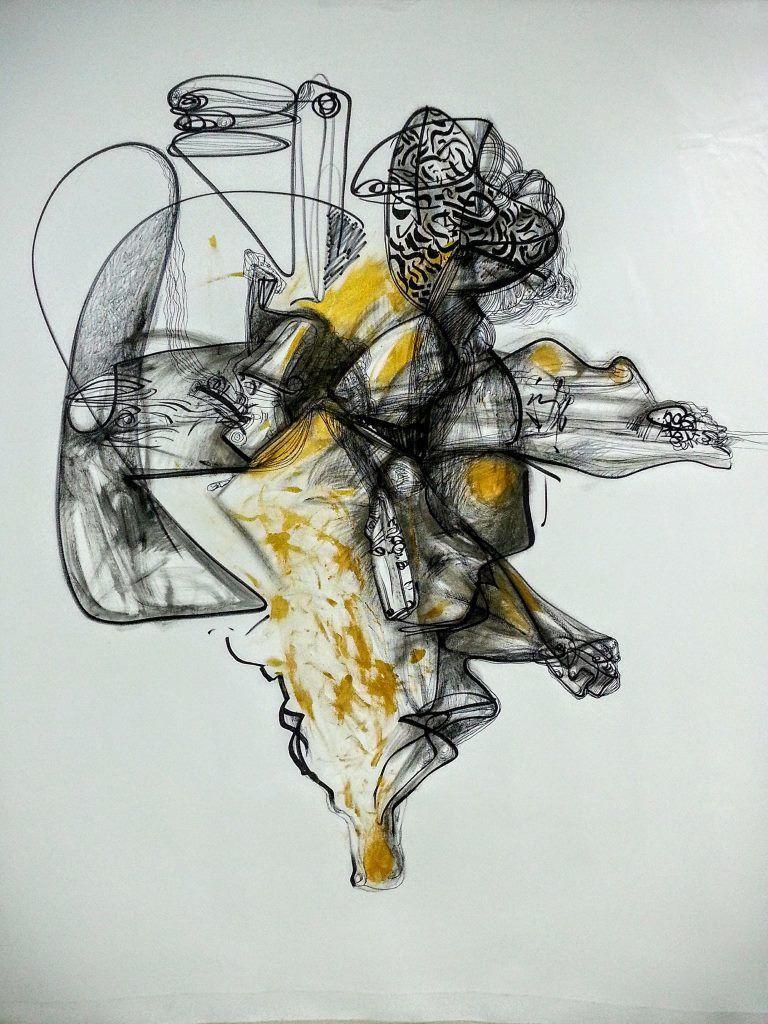 Kasemaa’s artworks are subconsciously born from the lines of spontaneous drawing, never knowing what will come out of it, while in the end intuitively addressing wide characteristics of a person and a society.

“Despite impressive energy of the owner of the Abu Dhabi Art Hub, Ahmed Saleh Al Yafei, while taking us to most interesting and often unexpected places, a month is only barely enough to start getting a glimpse of the deeper levels of the society and people. But this short period is fortunately more than enough to develop a strong wish to come back and dig deeper. Thus my art project here is called ‘Scratching the surface’. So, like me, the viewers are welcome to mentally ‘scratch the surface’ of my artworks and try to find out their own interpretations,” Kasemaa said.