A host of Christ’s followers gather on a hilltop to witness his ascension into heaven. As the group watches from below, Christ’s feet disappear into an opening in the clouds. No, not a quote from an abridged New Testament, but from the British National Gallery’s description of The Ascension, one of only a handful of confirmed works of Michel Sittow, 16th-century painter from Tallinn – or Reval, as it was then known. 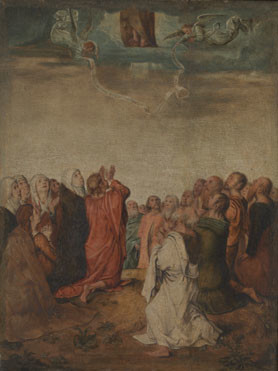 Room 63 in London’s National Gallery is not unlike most of its numbered siblings – open, light and airy. But, geometry aside, different rooms in the gallery (the world’s fourth most visited art museum) have their own distinct atmosphere. Having spent many an afternoon within these walls, staring in wistful abandon, I’ve noticed the most convivial ambience is to be found directly in front of Delaroche’s 1833 work The Execution of Lady Jane Grey, where in spite of its gruesome subject matter, people chat away with gay abandon. But Room 63, despite its architectural brightness, retains an atmosphere that is almost sepulchral. Again, this is not something I can explain – despite the religious character of some the assorted works (ascension scenes, mother and child, choirs of angels, etc) there is nothing exceptionally mournful about them. Yet it is a room that not only seems devoid of mirth or happiness, but one of sadness and melancholy. Nobody even whispers. People shuffle from piece to piece and move on, almost mechanically.

Undeterred by feeling as though you’re a guest at a funeral that’s being held in the middle of a shopping centre, Room 63 is one certainly worth visiting – for tucked away in one corner is the only piece of artwork you will find here whose painter originates from the land we now call Estonia. Born in the late 1460’s in what was then Reval (now Tallinn), Michel Sittow was trained in the early Netherlandish school of painting and enjoyed, by the standards of the day, a fairly lucrative career as a court painter. Amongst his clients he counted Isabella of Castille (also known as Isabella the Catholic), for whom he produced a series of painted panels of oak, to be likely used as altarpieces. Indeed, Isabella appreciated Sittow’s work so much that she paid him over double that of his nearest rival.

Despite his royal favour, life didn’t always treat Sittow well – he had probate battles over his family’s estate and lived for some years almost itinerantly, going where his work took him. After his death in Reval, probably from the plague in 1525/26, his work remained almost entirely forgotten until the 20th century, when art historians investigated the works owned by Isabella of Castille. Even then, as Sittow never much adopted the habit of signing or dating his works, much of the information about him is the result of conjecture and educated guesswork. However, almost all historians agree that The Ascension is one of the few works that can be securely attributed to him.

Painted on oak, the first thing to be noted about The Ascension is its size – at only 22.5cm by 16cm, it isn’t especially dazzling (if art should ever “dazzle”). Unlike many other depictions of the scene, Christ himself is here shown only from the knees down, Sittow perhaps wanting to focus on the witnesses to the event as opposed to the holy son himself. As the bible doesn’t list those present, the artist is free to use his own judgement on the witnesses – here we are shown Saint John the Divine, Saint Peter, Mary Magdalene and, of course, the Virgin Mary.

In a gallery full of paintings that are well over five or six times as large, you could be forgiven for making the mistake of overlooking The Ascension. And overlook it people did. I observed, quietly, for forty minutes the passing stream of assorted arty types, tourists and those who had come in to relieve themselves of the cold weather and only a handful looked at The Ascension for more than two or three seconds. Respectfully, I asked some of them what they thought and the results were less than impressive. The theme of the day (from those who speak enough English for a conversation about art) was, “It’s nice but small.” Rather saddened, I made to leave.

It was then I saw her; a lady, short, grey-haired and smartly (but warmly) dressed, making her way along to the corner spot. I made a note to myself that if she displays any interest in the painting, I’ll try and make conversation – if not, then coffee and home. To my gratification she lingered by the painting. As she moved off, I stalked my prey. To my (probably all too visible) relief she was happy to converse and hadn’t just walked in to keep the blood flowing to her extremities.

“Well, dear,” she began, “I don’t suppose you’d call me especially religious, but I do like to come and see the paintings showing Jesus and the events of his time and the bible. It’s [The Ascension] not as big as some of the others showing him going into heaven or coming back to life, but I quite like that. It doesn’t feel overwhelming if you…” and then her voice trailed off. “I know exactly what you mean,” I added reassuringly and she continued: “It seems… I don’t know… honest. Honest in showing the people there. It all looks quite simple and not overblown and more real. Not that I know anything about art, but I do like it.” I thanked her for her time and let her be on her way and she told me to “have a nice day, dear”.

I looked at my notes of what she said and in her own simple and rather charming way, she’s right.

The Ascension by Michel Sittow is currently displayed, on loan from a private collection, in Room 63 of the National Gallery, Trafalgar Square, London.