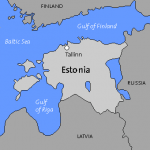 In 1999, Deutsche Welle, Germany’s international broadcaster, sent camera crews to countries formerly oppressed by the Soviet Union to get acquainted with and introduce the candidates for accession to the European Union. They wanted to find out what hopes the people had for their countries’ EU membership and how they expected it to affect their own lives. More than ten years later, DW returned. As Estonia is preparing to celebrate its 22 years of re-independence on 20 August, we have published Deutsche Welle’s short film of their return trip to Estonia.

On Deutsche Welle’s return trip the filmmakers revisited the protagonists of the first series and asked them how the past ten years have treated them and where they stand now — in today’s European Union.