The Cambridge Baltic Conference, due to take place on October 12, will bring together leaders in politics, science and business with students and young professionals. 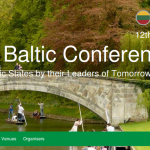 Notable speakers include former Prime Minister of Estonia and Vice-President of the European Commission Siim Kallas, former President of Lithuania Valdas Adamkus and International Editor of The Economist Edward Lucas. The conference, organised by the Cambridge University’s (UK) Estonian, Latvian and Lithuanian societies includes speeches, workshops and presentations along with ample opportunities for networking.

According to Regina Sirendi, one of the organisers behind the event, “The challenges overcome and lessons learnt from recent political, social and economic transitions will surely be of interest and high value not only for the Baltic States but for the whole European Union community as well.”

“Together with inspiring speeches and engaging panel discussions by highest caliber speakers, participants will be given an opportunity to take part in interactive brainstorming workshops aimed to providing innovative ideas to foster the communication between the Baltic States and the European Union.”

For early arrivals there is a tour of Cambridge and the programme concludes with a networking reception and dinner at King’s College Hall. For further information and registration, please visit http://cambridgebalticconference.eu.

EstonianWorld.com is one of the media partners of The Cambridge Baltic Conference.