As we celebrate the international women’s day, it is worth to take a look at the stories of two strong and highly influential women who played the leading roles in Estonian women’s rights movement in the 19th and 20th century.

In anticipation of Estonia’s 100th birthday in 2018, there are many other reasons to celebrate. This year is also a year of several celebrations for the country’s feminist movement – Estonian women have had the right to vote for 100 years by now; we were among the first in Europe and proud of that.

It took decades of political struggle to achieve it and this struggle has received far too little attention in the country’s historical research and even in the local Estonian feminist writing. As we celebrate the international women’s day, it is worth to take a look at the stories of two strong and highly influential women who played the leading roles in Estonian women’s rights movement in the 19th and 20th century.

Lilli Suburg and her “Linda” 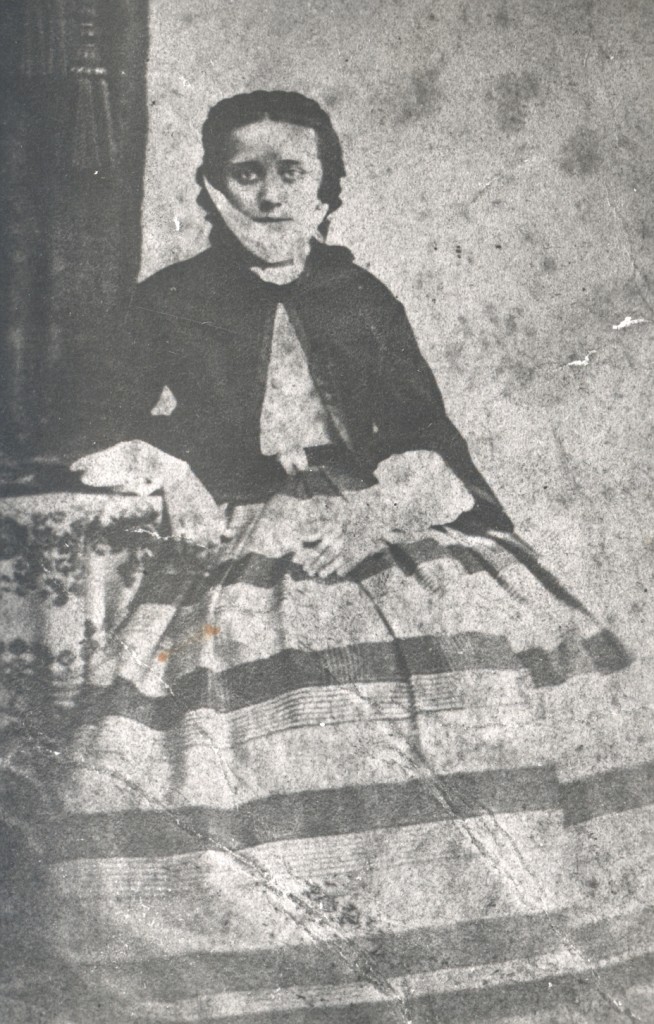 Her newspaper and the girls’ school, established just some years earlier, were located in the same two-floored house in Viljandi, a small town in southern Estonia. It became a centre for the cultural elites at the time, lots of people found their way to Suburg’s house and, of course, many of her students became later the very first educated professional women in Estonia.

Andres Rennit, a poet working for Suburg during this period, writes in his memoirs, “… she was an energetic, strong minded person with good ability and will to work. She never changed her mind or gave up ideas she once had started to consider to be the correct ones, and she did not let anybody to influence that.”

And probably only thanks to that strong willpower and her great intelligence was she able to push forward the national conservative public discussion and views about the Estonian women’s rights to study, their free choice to stay single and not to marry, to stand up and make their voices heard and much more.

The feedback she received for her articles was not always kind. Other newspapers could mock her and her writings publicly. Women were not allowed to step up to the public arena, otherwise they could lose their special feminine qualities and the right to be protected by men, according to the proponents. 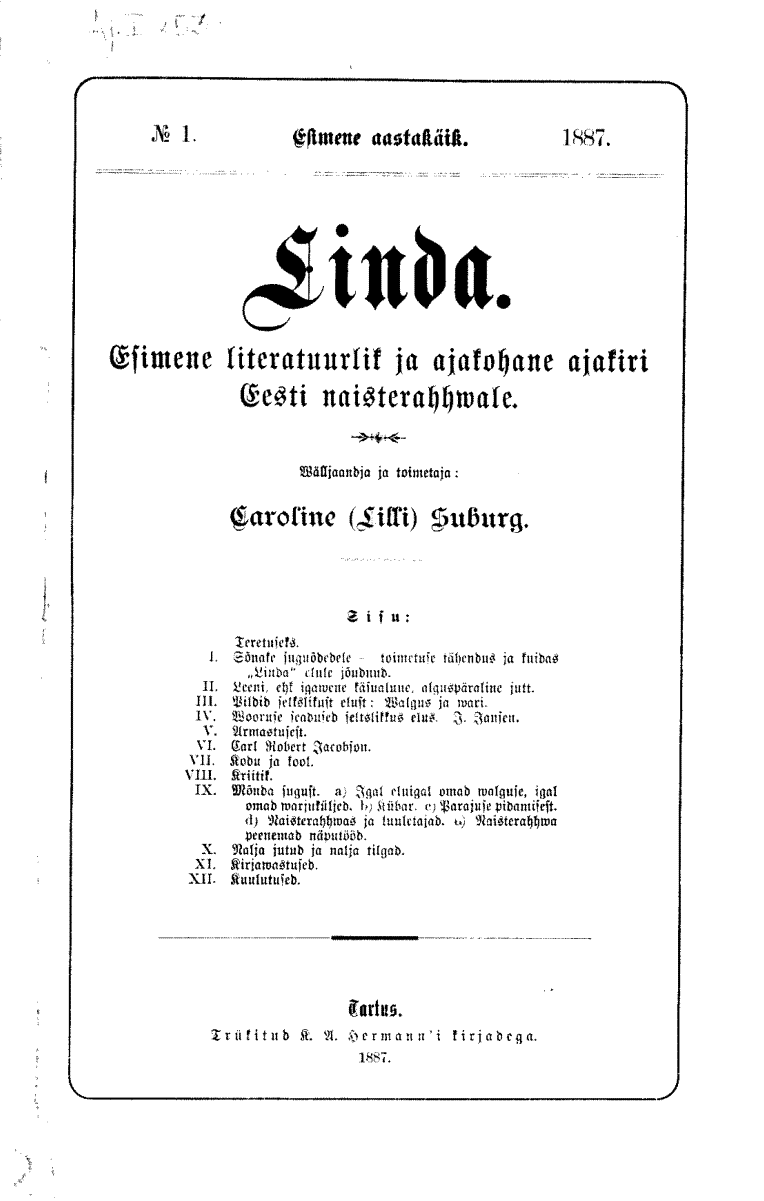 Her writings were, of course, radical at the time and very novel in the Estonian public media. She wrote about the importance of emancipation of women, women’s education and introduced the international developments in global women’s rights movements.

Unfortunately, the local readers were not quite ready for Suburg and her feminist journal in Estonian. In her memoirs, she writes how some women did not even dare to read the paper openly, so they kept it in the barn and read it secretly, hidden from their husbands. Because of the financial troubles of her enterprise, Suburg was forced to sell the magazine in 1894.

Lilly Suburg died in 1923. She experienced the political liberation of Estonian women in 1917, when the women got the right to vote and to be elected. She sent her joyful greetings to the first women’s congress held in the same year and had several honorary positions in women’s organisations established at that time.

Marie Reisik and the “Women’s Work and Life”

Marie Reisik was born in the same year when Lilli Suburg founded her magazine “Linda”, in 1887. Already in Reisik’s childhood she met well-known and highly educated Estonian women at her home in Kilingi-Nõmme, at the time a small village located between Viljandi and Pärnu. She went to the same girls’ school in Pärnu where Lilli Suburg and the legendary Estonian national poet, Lydia Koidula, had studied. 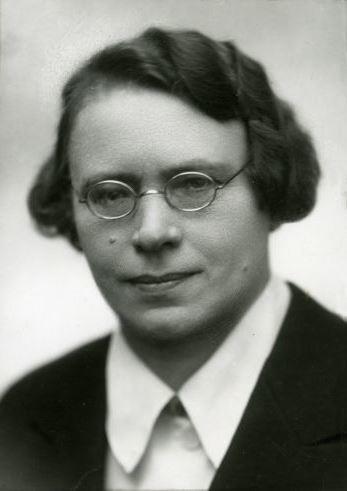 In 1907, Reisik was among the founders of the first Estonian women’s organisation in Tartu. As women were not yet allowed to enter universities in the Russian Empire during that time, in 1908 she went to study in Paris to become a French teacher.

After returning to Estonia, Reisik established the first political journal for women, “Naisterahva Töö ja Elu” (“Women’s Work and Life”). As a result of her work, many educated Estonian women united under this journalistic umbrella and, in 1917, the very first Estonian Women’s Congress took place. It later led to the founding of the Estonian Women’s Union in 1920.

One might say Reisik was a political genius because she was able to create a united front of the women’s movement that lasted nearly throughout the pre-war Estonian independence, until 1940. Despite the fact that women’s views along the wide political spectrum rather often meant conflicts and contradicted with many other opinions, the Estonian Women’s Union accomplished to establish a large network of emancipated active women. They, in turn, had a strong impact on the development of the Estonian culture and society at the time.

Reisik was elected to the Estonian Constituent Assembly in 1919 and to parliament, the Riigikogu, in 1929 and 1932. In her parliamentary party group, led by one of the political heavyweights of the time, Jaan Tõnisson, Reisik was the only elected female member. It is worth mentioning that in the 1929 election, Reisik received more votes than Tõnisson himself.

The Estonian Women’s Union was dissolved after the Soviet Union occupied Estonia in 1940 and by 1941, Reisik was pursued by the Soviet secret police, NKVD. The same year, she died in unclear circumstances at a Tallinn hospital.

Today, Reisik’s feminist political thought is sadly almost totally forgotten. When we celebrate the Estonian feminist movement, we ought to remember these remarkable women who made a big difference over 100 years ago.

Cover: Marie Reisik and Lilli Suburg (image courtesy of feministeerium.ee). Please consider making a donation for the continuous improvement of our publication.