Edith Soosaar, an Estonian freelance journalist who is currently based in Toronto, took a trip to the US city of Detroit, MI – and discovered you can buy a house for as little as USD1,000.

From many weekend trip options from Toronto, a less travelled one is Detroit, often dismissed as a shadow of its former (not so long time ago) glory. When asking around, opinions vary. Some say it’s a dangerous place or simply boring, while others argued Detroit was up-and-coming, with good property prices and new people moving in to build it up. This left me with only one thing to do – go and see for myself.

A change of scenery

It’s a long weekend, the busses and trains are sold out, so I decide to hitch-hike. It’s a 370-kilometre (230-mile) trip from Toronto. The sun is finally out, and roads are nice and dry. With a relaxed lunch on the way and a few sights, it’s already dark when I reach Windsor, the twin-town of Detroit, on the Canadian side. The two towns are separated by a river and connected by a tunnel and a bridge. After border control (a small confusion with the fee on the border, and I quote, “we don’t accept that monopoly money here”, referring to Canadian dollars) the tunnel bus takes me to the other side, to Detroit city centre.

At this late hour, the station is nearly empty. Only a few people next to their worldly belongings, some look like the station is their sleeping place. Despite being a female solo traveller, nobody pesters me. The few looks that I get are curious rather than unfriendly. When the bus arrives, a male passenger even courteously volunteers to allow me to enter ahead of him. The bus is relatively clean, and nobody is loud or obnoxious. So far so good – Detroit doesn’t seem to justify the dubious part of its reputation.

I bless my habit of downloading a local offline Google map and it turns out to be a great help for finding the right stop and the actual address. My host lives off the main road and the street lights are scarce. There is enough light gleaming from a distant, bigger road, to see windows covered with plywood and walls “decorated” by graffiti. It’s a change of scenery, compared with the colourful, artistic mural-adorned areas of Toronto where I usually go.

I reach my destination without any incident and meet my CouchSurfing host, David. He is a serial-host, a world traveller, music buff and a bike enthusiast. He tells me that the area is sensibly safe, violent crimes are not common, unless one goes to suspicious areas alone during the night. To me, that sounds about as safe as most big cities.

A new day comes with a warmth that would pass for a summer in my own country, Estonia. In daylight the house turns out to be a gorgeous wooden building with gables and elaborate wood lace details. It’s pretty but completely run down.

Turns out Detroit is a perfect city for riding a bike – the roads are wide and in a surprisingly good condition, and there are no hills. David has a spare bicycle and he tells me I am welcome to use it. Before we head out, I am being reminded to always lock the doors behind me, and fasten a bike to something solid, preferably with two locks.

I am not quite as daring a rider as my host, but we reach the city centre without any trouble. It’s Saturday and we are heading to a famous and more than hundred years old Eastern market, a large semi-outdoor marketplace with the stalls full of a fresh produce by local farmers. 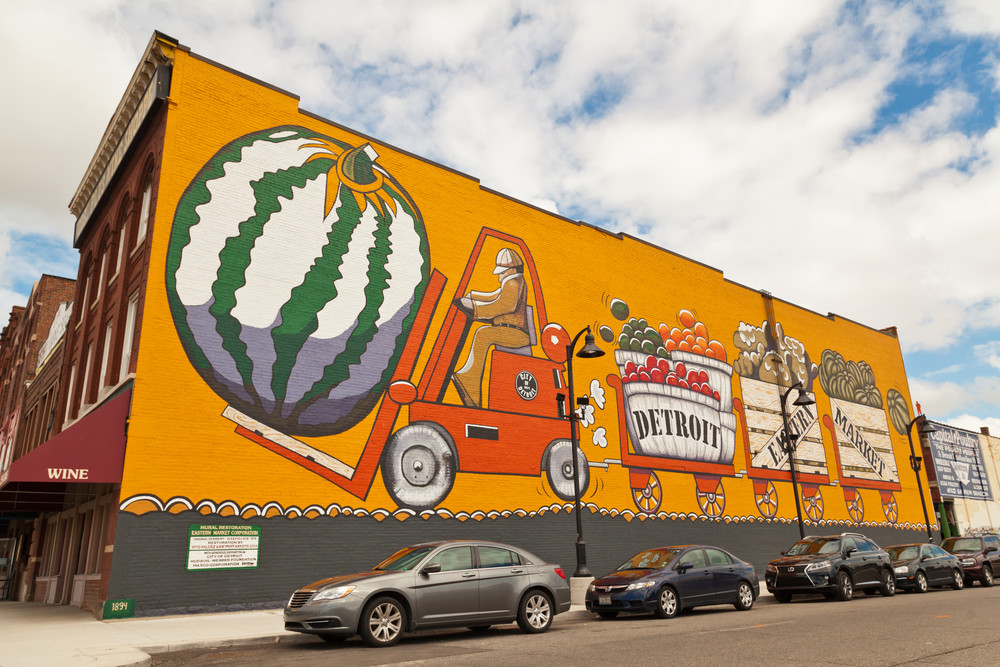 Munching on a bag of young sugar-snap peas, I venture between the stalls. Many sell arts and crafts, edible as well as non-edible. There is a whole counter with different olive oils, another one has a selection of fresh artisan breads, and further away, my eye is captured by handmade baskets. David introduces me to a friend who has a stall of homemade salsas and sauces. He started a family business from scratch and the business is growing steadily, with some bigger shops now even starting to stock his merchandise. He is almost sold out, after a long market day, but we get to sample a few of his sauces. “No wonder he is doing well,” I think, admiring the fresh and spicy taste and pretty colour of the sauce.

Next, we head back toward the centre to meet a group of David’s friends for lunch. Streets of Detroit seem to be a few sizes too big for the number of people living here. On a sunny Saturday afternoon, the streets are far from empty, but it’s clear the place was built for a larger population. In any other large city, the roads would be jam-packed with vehicles and sidewalks would swarm with pedestrians. I am not used to fitting on the road with my bike and even having occasionally a space to spare.

We are having a meal in a bar with eight of my host’s friends, most of whom have moved to Detroit within last few years. Some have families, others are still single. Most have their own business, either running a small shop or doing something art-related. One of them is hoping to open her own yoga studio soon.

The question in my mind quickly becomes a conversation topic: “Why did you decide to move to Detroit?” Stories vary but through the vague praises like “vibrant culture scenery”, “youthful energy” and “endless possibilities”, the recurring theme seems to be a wish to follow one’s passion. Affordable property prices and a surplus of available space allow them the freedom to choose other than a corporate career, for example. At the same time, Detroit is still a large city, with world-class music and sports events happening as well as having an international airport. 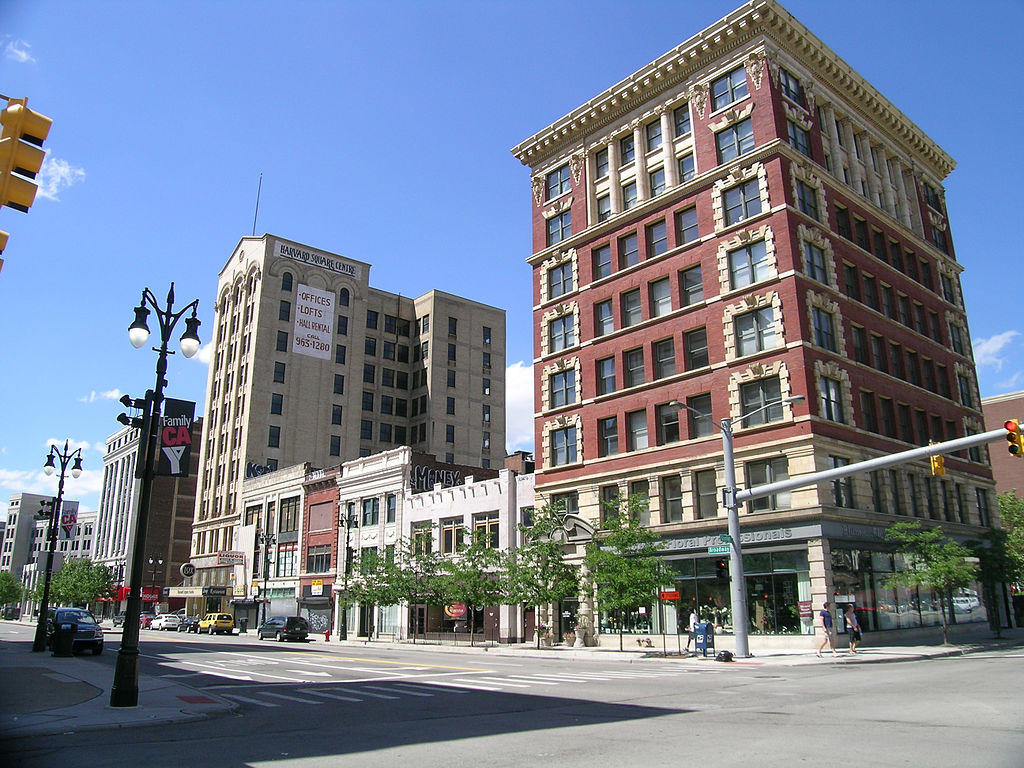 “Can you really buy a house in Detroit for USD1,000?” I ask from my companions. A short answer is, yes, you can. The Detroit Land Bank Authority, for example, has hundreds of active auctions with a USD1,000 starting price.

A longer answer also is, yes, you can, but it would probably cost a lot more to renovate the house. With the auction houses, you would officially have six months to get the work started. On the Land Bank website, it states that “failure to bring a property up to code within 6 months will result in forfeiture of property”. I have been told, however, that the six-month rule is a sort of a fail-safe policy and unless you haven’t started to do any renovating, they are not interested in trying to take a house back from you. Their aim is to discourage opportunistic investors from grabbing the houses and sitting on them, while others build up the area. They want people who actually come and live here.

Although there are many houses available, selecting a right location is important as well. Whole blocks in the city have been abandoned, sometimes with electricity and water turned off in the entire area. The empty houses are also targets for thieves. I am being told a story where right after fitting a new bathroom in the house under renovation, it was broken into overnight and everything was stolen, including the newly installed toilet and bathtub. Despite all of this, good houses in more populated areas find an owner fast. For instance, my host David and his friends have been keeping an eye out for a good property to start their own club. 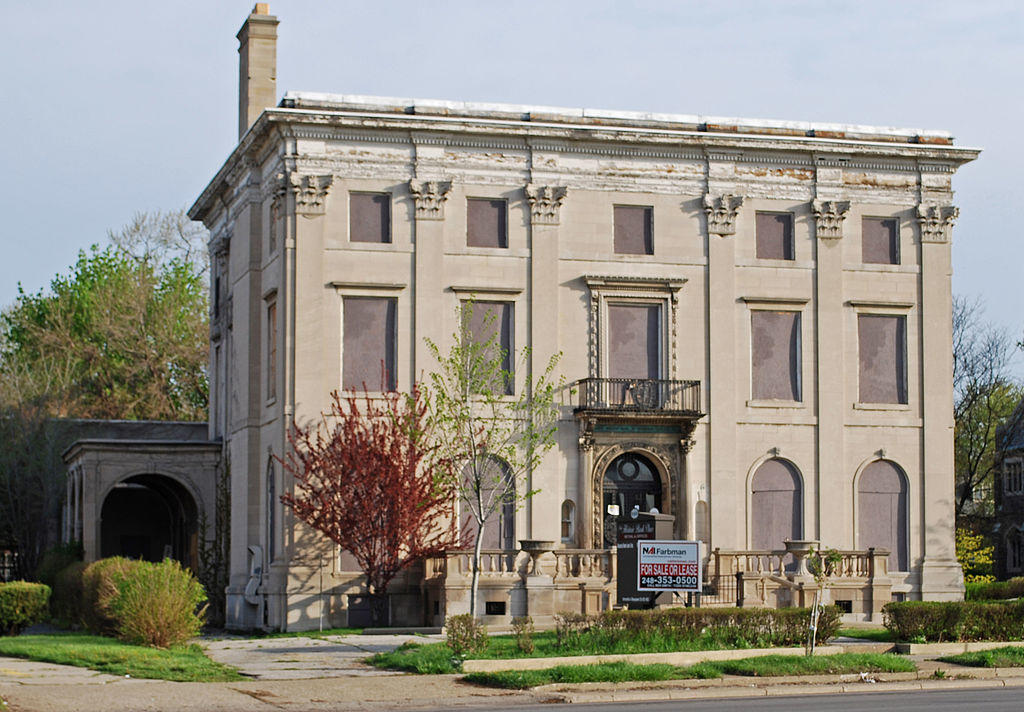 I can see the appeal. Detroit is a rare unicorn, closest thing to an affordable metropolis. What is the catch? Not too surprisingly, a lack of employment – you would need to create your own income somehow or have a long-distance job.

Listening to the stories and plans of people around me, I see a pioneering spirit in them – a determination to seize the opportunity and live on their own terms and make their own choices. They work for everything they have and due to their hard labour, cosy cafés and cute little shops have appeared in the city. One by one, the houses get renovated and new ideas start to dominate over graffiti, ruins and potholes. 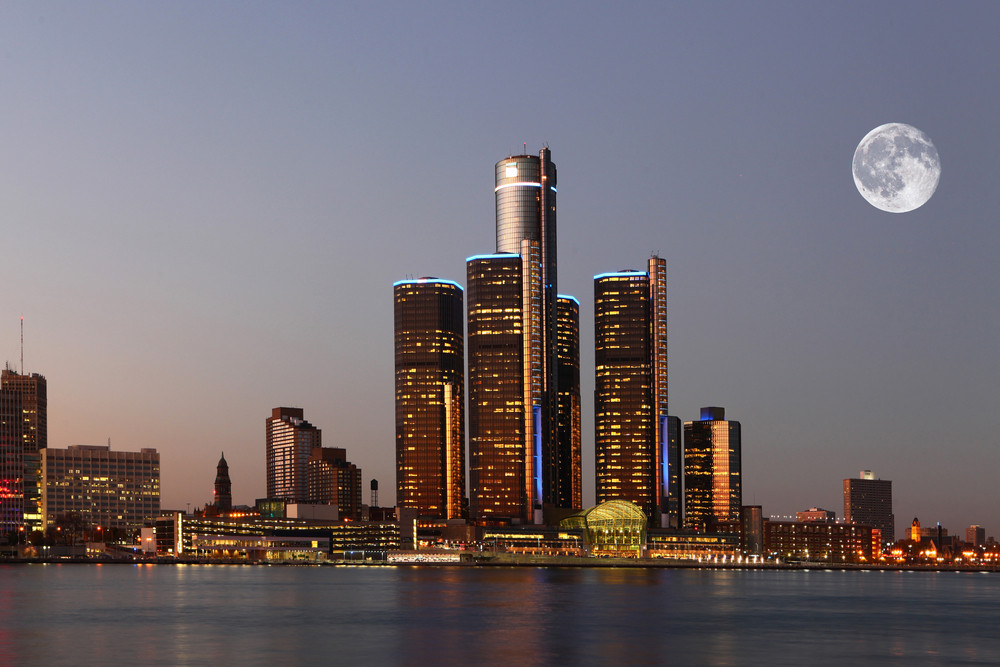 Our day ends with a midnight bike ride. David dreams of a Detroit becoming a bike town, a place where bicycles are acknowledged, not overlooked. Our ride proceeds to the Bell Isle Park, an island between Windsor and Detroit. The park is closed for the night, so we cross the bridge with our lights turned off and stay quiet. We stop and admire the well-lit Detroit skyline, the new city built across and between the ruins. My mind is packed with ideas on what could be done in a place like this. An art studio, a dog hotel, a yoga retreat, a library, a creative community or a candy factory. What would you do?

Cover: Abandoned houses in Detroit (the image is illustrative/Shutterstock).