I admit it, I underestimated bogs. When I first researched Estonia I was somewhat taken aback by the tourist information efforts to sell bogs and boulders as highlights of the country. Bogs conjure images of muddy Welshmen snorkelling through drainage ditches as an excuse to start drinking cider before lunchtime, and a “quirky” photo opportunity for the local press. And boulders, well, it makes Estonia sound like a giant rockery. But both have impressed me.

In Estonia there is a sort of brutal, mucky nature that England doesn’t have much of. Nature in England, at least in the southeast, is gentle and rolling. Bountiful and green, as long as you can ignore the constant hum of cars from the ever-present motorway network. Nature wasn’t messing about when she dropped a load of rocks as big as houses all over the place here, or made bogs that are impassable except when flooded, and that would suck off your shoes and then break your ankles with twisted tree roots, leaving you to become bear food. Nothing gentle or comforting about that.

What there is here, that simply doesn’t exist in England (although can still be found elsewhere in the UK), is space and silence. Persuade the kids to stop chuntering and all you hear is bird song and the gentle creaking of the ageing pines. Occasionally a woodpecker breaks the silence and we spend the next five minutes craning our necks trying to spot him. Somewhere he’s sniggering hidden away at the top of a tree, watching us desperately trying to find him.

Soomaa in the spring is amazing. The flooding when the snow melts means that you can canoe through dense pine forest, as the run off causes the water level to rise up to five meters, well and truly covering the flood plain and the forest. The bog is impassable so boardwalks have been added, to keep your feet dry and terrify the parents of small children who run enthusiastically towards the next flood markers along the completely authentically Estonian (ie the main health and safety features being that it is only just a little bit wobbly) trail. 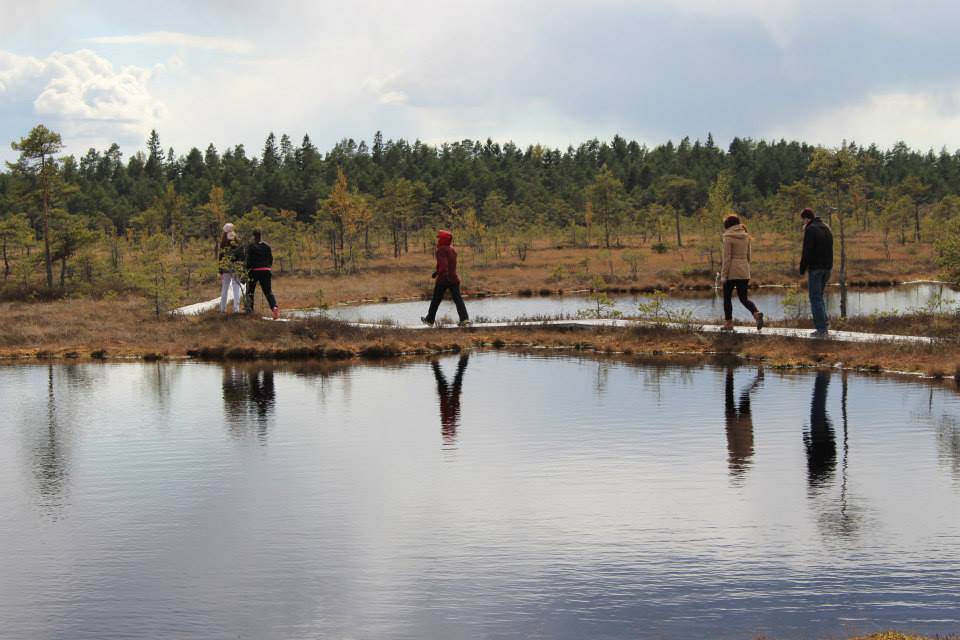 Bogland in springtime is alive – just try to arrive after the flooding but before the mosquitoes. At one point on our walk we stopped to try to identify the noise that was disturbing the usual birdsong theme of the forest. Machinery, perhaps, or vehicles. It was loud, anyway, and close by. And then we realised, the entire surface area of the fairly substantial pond next to us was heaving, writhing with the movement of frogs. The noise was the chorus of a thousand Estonian frogs, reverberating in the still warm air and amplified by the banks of the pond.

Once you focus, you realise that the dark mass that looked like leaves or pond weed, is in fact frogs under the surface, observing the day. One of their number sauntered nonchalantly past us, to the children’s delight, adding squeals of delight to punctuate the drone. Later a confident frog swam along with us up the ditch to the side of the track we had taken, gliding gracefully through the water and looking to be enjoying the spring sunshine just as much as we were. 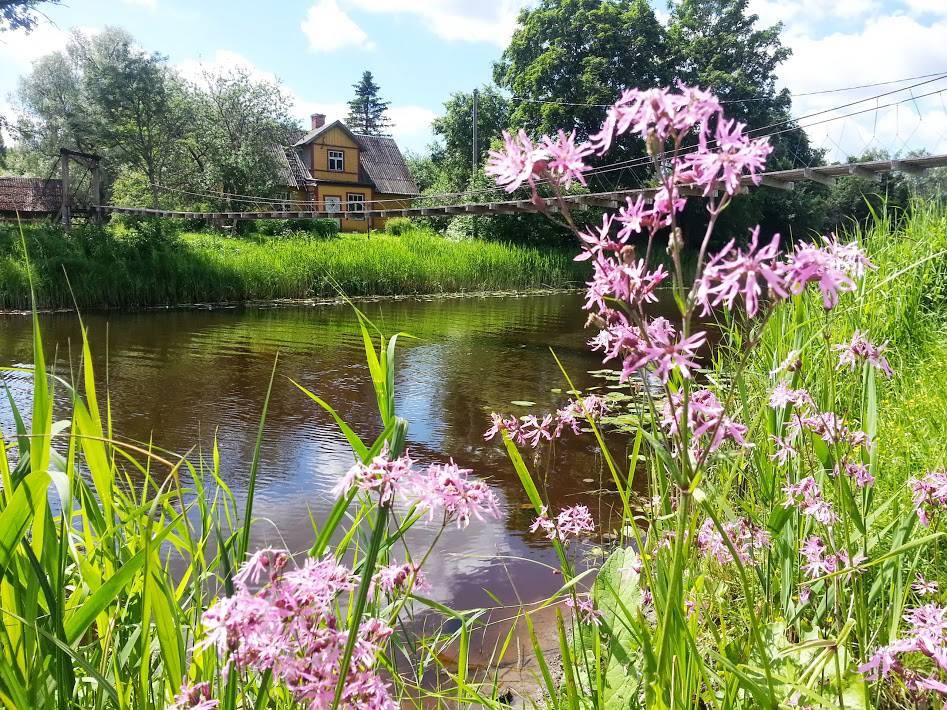 Somewhat less subtle were the beavers – with a trail of destruction along the river marking their presence. Abandoned lodges and gnawed trees, but no sign of the beavers themselves. If they’re clever enough to figure out how to protect themselves by damming the river, they’re probably smart enough to know that keeping their heads down when there are humans about is a good plan.

Luckily the storks are not so worried. Some of them even seemed to think then were sheep, milling about in fields picking aimlessly at the grass. Perched on their impressively designed but impractically located nests, they’re imposing creatures, but presumably not the brightest as they have chosen high voltage cabling as a design feature. 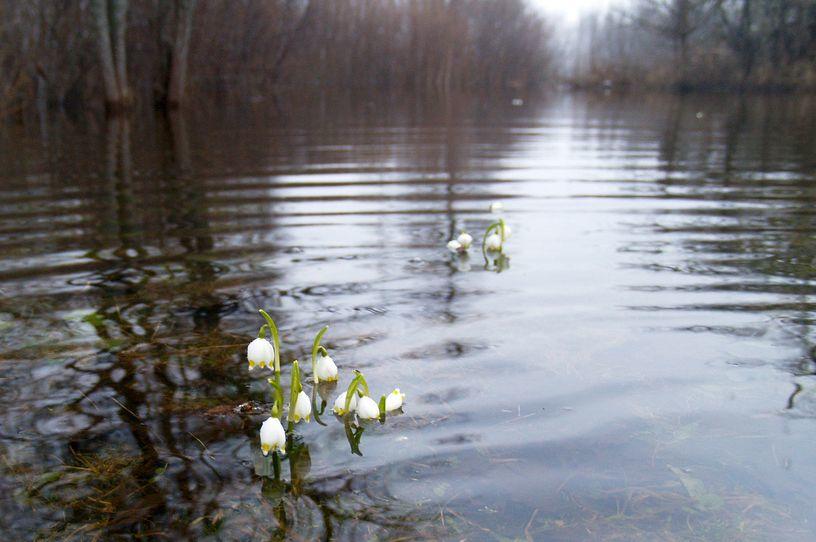 Mainly, I learned that, to properly appreciate the bog, you have to stop and look, and be still. At first glance the sides of the track we were walking on seemed to be little more than muddy puddles. Then you tune in to the life there – frogspawn and tadpoles, snails swimming in the shallows, bubbles showing creatures hidden under the surface and insects skimming gently along the top. There’s a whole soap opera happening down there but you wouldn’t know it unless you were still and silent. How very Estonian. 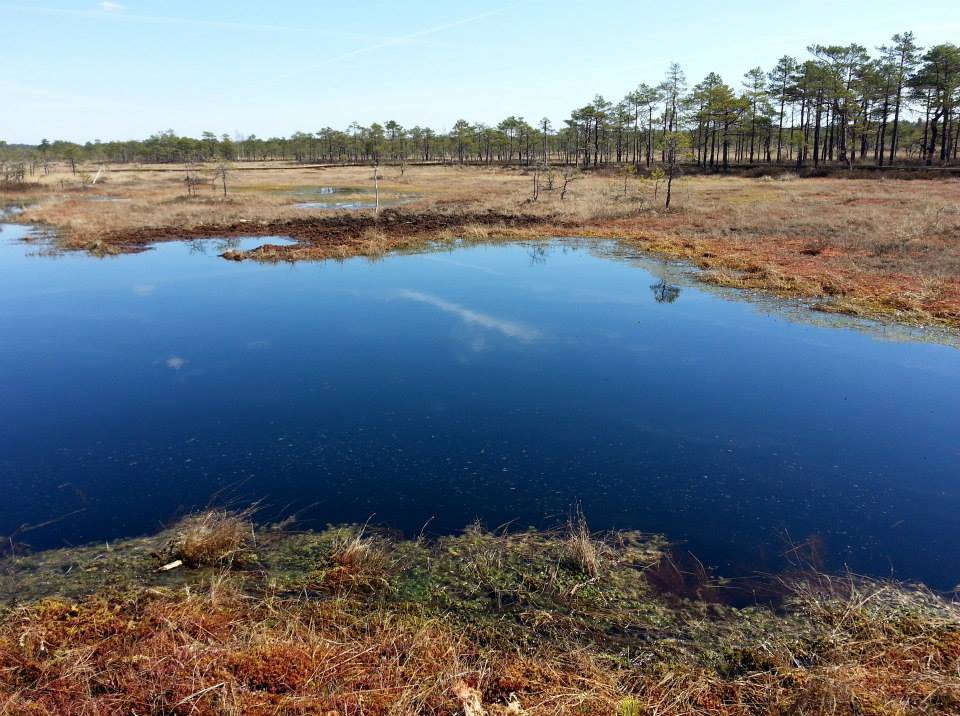