Estonian proper names pronounced true to form, but spoken in an English speaking setting, can lead to confusion, embarrassment, and on occasion, comedy. Take for example my first name: Andres. Phonetically, the Estonian pronunciation sounds pretty darn close to the English word for removing one’s clothes. So, as I don’t want to mistake whether someone is trying to get my attention or rather asking me to remove my trousers, I typically anglicise Andres in non-Estonian situations. This way I avoid confusion… and possibly a court appearance for public indecent exposure. 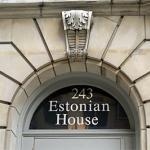 There are other Estonian names with similar translation issues.  I could simply list these incongruities, but that would be boring.  So, I decided to avoid a stuffy academic exposition in favor of a fictional tale.  Keep the subject matter in mind – Estonian first names spoken in English situations – and enjoy the following anecdote of nomenclature peculiarities.

(The setting is a New York City grocery store frequented by Estonians.  It is a Saturday afternoon in mid-April)

Toomas and Tiit, brothers in blood and youthful delinquents in nature, walk through the front door. Ever the prankster, Tiit deliberately trips his brother in front of a small crowd.  Laughing, but rightfully afraid of retribution, Tiit runs down an aisle.  After picking himself up, now red in the face, Toomas searches for his kid brother.  Not able to find him but with thoughts of revenge in mind, Toomas yells “yeah, that’s right, you better hide Tiit.”  In the corner cafe, startled after hearing the threat, a young mother nursing her baby quickly covers up her bosom.  How rude, she thinks to herself.

In the produce aisle, a mother loses track of her Estonian son and his Japanese friend.  With panic settling in her voice, she calls out to the two missing children: “Avo, Kado.  Avo, Kado.  Where are you?”  An alert and friendly store clerk says he can help, and then points the mother toward the green ripened fruit between the bananas and kiwis.  The two boys, inseparable up to that point, would later drift apart as the years pass.  However, both would suffer from a life-long aversion to guacamole.

Moving down the coffee aisle, a young man is trying to find a certain store clerk that previously caught his eye.  He is convinced she was flirting with him during his last visit to the store, but somewhat shy, he had not seized the moment.  Luckily though, he had noticed the name badge on her store issue vest – Tiiu.  Disheartened that he cannot find her, but determined to ask her on a date, he notices an employee stocking shelves.  “I’m looking for Tiiu,” says the young man to the clerk.  “Listen buddy, my name’s not You, but the tea is right over there next to the coffee.”

In the dairy section, two middle-aged friends are reminiscing about times of yore.  The first friend is trying to remember the name of a college classmate the other had dated.  It was one of those moments where you suddenly and for no reason remember a face from the past, but just can’t match it to a name.  “Aino,” says the second friend.  The first says, “I know you know, but tell me, I can’t remember her name.”  Says the second friend again, “Aino.”  This goes on, back and forth, for several excruciating minutes.

In a poorly lit corner of the store, a shady looking character snatches the purse from an eldery lady’s shoulder.  A tough old cookie, the lady runs after the purse snatcher shouting “Hey, No” over and over again.  A security guard, in the right place at the right time, witnesses the purse clutching man with the yelling grandmother in hot pursuit.  He tackles the perpetrator, cuffs him, and goes for his wallet to find his identification.  Amazed, the security guard asks the victim whether she knows the assailant.  “No,” she says.  Asks the security guard, “then how did you know his name was Heino?”

Across town a man frantically dial’s his wife’s cell phone.  To him, this was a true emergency.  Minutes earlier he had opened the refrigerator door only to realize – no more beer in the house.  But his wife’s cell phone began ringing on the kitchen counter.  She had left it behind.  Thirsty, frazzled, but determined, the man dials the grocery to have his wife paged over the intercom.  At the store, the clerk picks up the ringing phone and gladly pages the man’s wife.  After a few minutes on hold, she picks up the phone.  Says the man, “Anita, I need a beer.”

So ends our tale of Estonian given name folly. To paraphrase Shakespeare, an Estonian by any other name would sound as funny…