The Brits have an ambivalent relationship with their royals. Reasonably normal activities – like getting married, having babies, sustaining minor injuries and such – prompts 24-hour rolling news coverage of closed hospital doors, inactive churches and air headed interviews with people with the most tenuous connections to the actual events. If you search online for “Prince Harry” today, the vast majority of the news results describe that Harry “sent his first tweet” recently. Why the fact that a “bloke learns how to use Twitter”, or even that a “famous bloke realises he should employ someone to use Twitter for him” should be news is beyond me.

But then, we did have two years on the bounce with extra bank holidays because of a jubilee and a royal wedding, which did a lot to persuade doubters of the value of the royals. And everyone secretly likes the (sadly not totally accurate) idea that Kate Middleton was just a “normal” girl who grew up to be a princess.

Not that there aren’t detractors. There is certainly an anti-monarchy presence at most royal gigs, reminding us the cost to the taxpayer of each family member. This split of opinion is one of the reasons why I’ve never bothered to venture to any royal events in London – I wouldn’t be sure where to put myself between the detractors and the hordes of teenagers wearing “Marry Me, Harry” T-shirts. Harry, being, after all, recently on the market again following his split from his girlfriend. Sadly for him, I’m deliriously happily married already. But, seeing as he has made it all the way to Estonia, we thought we would go to see what people here make of the spectacle.

A royal appearance in the UK would have enthusiasts camping out from the night before in the hope of getting the best view, waving banners and flags, providing lots of illustrative news footage and leaving the rest of us wondering what they told their bosses when they called in sick that day. For Harry’s appearance here, the instruction was simply to arrive 15 minute or so before the prince was expected. Being fashionably late simply is not the done thing, but equally, no need to bunk off work for it.

So, we duly arrived with time to spare. I had passed Vabaduse väljak earlier, and there was no sign of any unusual activity. The flower ladies were there, the odd wandering tourist, a scattering of people outside Wabaduse Café. A large Tallinn city flag on the front of the building and a flower creation in similar blue and white were the only giveaways to the anticipated visit. By the time we got there, however, there was a crowd. Several hundred people milled about. Dignitaries loitered stiffly on the steps. The sun came out and went in. Jumpers were removed and replaced. A couple of bewildered looking joggers passed through, trying to keep a low profile. Every now and again an onlooker would sneak onto the café seating for a rest. A disproportionately large number of Union flags proliferated through the crowd.

Sporadic bursts of drumming from the Corp of Drums of the Duke of Lancaster’s Regiment got the crowd buzzing, then the spectacle faded and the milling of the crowd restarted. There was a security presence, but the square felt far from locked down.

When the prince arrived, it was surprisingly clinical. A security chap did a quick sweep looking over the steps and then several low key cars arrived, with Harry and other dignitaries appearing. A wreath was laid. And the circus of anticipation ended. The bugle played a mournful tune, the prince marched forward and the party saluted. For long enough to remember what this ceremony is really all about. It felt a sincere tribute to the fallen, a military party saluting the valour of their brethren in arms, not a titled Brit symbolically dipping into the country. I found myself surprisingly touched. 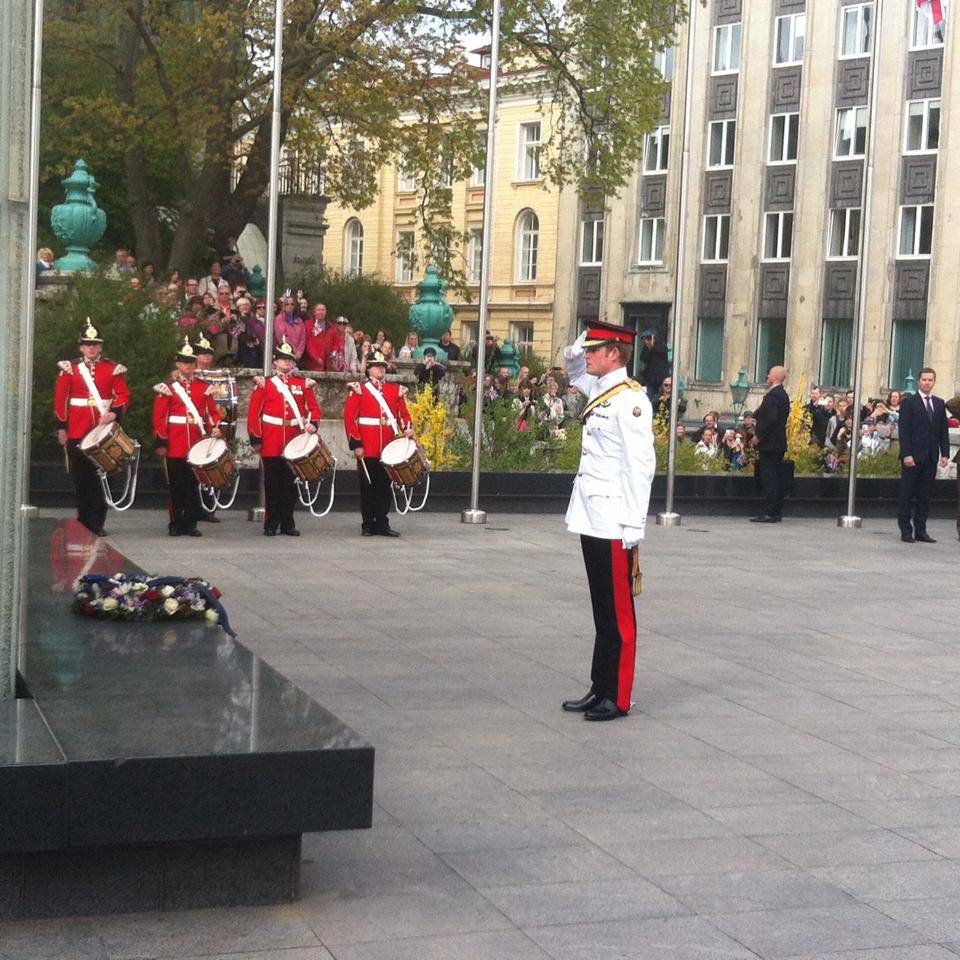 Of course, I knew Harry’s visit had a serious purpose. Afterwards, he met MPs at the Riigikogu, and (I suspect, the part closest to his heart), met wounded Estonian veterans who will be taking part in the Invictus Games in London this September. I’m not sure the episode has cleared my overall view of the monarchy in my mind, but as a vignette of one country showing a sincere support to another, I hope it felt as genuine to the Estonian crowd as it did to me.