Over four years ago, in March 2009, then an author-to-be Helen Eelrand decided to make a major life change. After having worked a lifetime in the Estonian media, she took her husband and two daughters (her adult son decided to remain in Estonia) and moved to Spain.

Let’s be honest, not many people are capable of just packing up their belongings and driving 2,700 miles to a strange country, completely different from their own. A different language, different climate, different culture and, most importantly, a completely different people. However, all that is why Helen had decided that Spain – or actually Andalusia – was her corner of the world, the place on earth she never wants to leave. 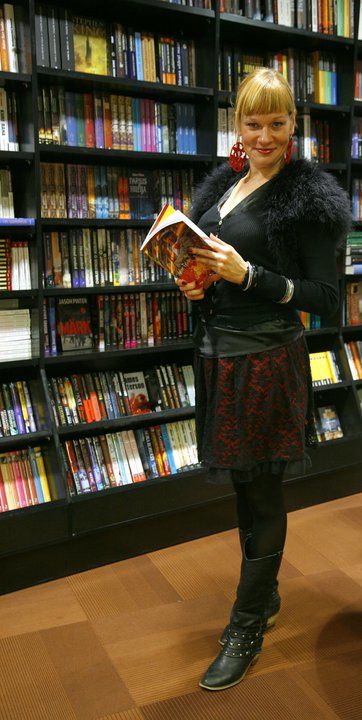 She had realised that a year before. “After a trip to the Cadiz area – where we later moved to – I just had the feeling: ‘How come I didn’t live there already?’ When we arrived back to Estonia, I was so homesick for Spain that all I did was sleep and I lost half of my hair. I believe everyone has their corner of the world that they recognise with their heart. And I’m very glad that for many, this corner is Estonia. But Andalusia is so ‘mine’ – everything feels right, logical, in its place. Completely different from Estonia, but still (or more so) ‘mine’. I love this country, people and language with the same passion Andalusians have.”

Feeling of peace and happiness

Helen was passionate about and fond of Spain long before she moved there. As she puts it, when she arrived in Spain, she arrived at home, and now, living there, she says that outside Spain she always lacks confidence. “When I visit Portugal and come back, on the border of the two countries I encounter this incomprehensible peace of mind, happiness and sense of safety,” she explains. “Once when I was on my way back from Estonia, I fell asleep in Barcelona airport just because I heard people speaking Spanish around me and the loudspeakers were playing a local radio station.” And even abroad – or, well, abroad for her – “In Tallinn I sometimes go to the Old Town to listen to Spanish tourists, just to make sure everything is all right.”

Indeed, hearing Spanish gives Helen the reassurance that everything is all right. “I have a special and unexplainable connection to this language. That said, it doesn’t mean I don’t care about Estonian. Languages interest me and give me something to think about. When I hear someone speaking Estonian incorrectly and at the same time calling themselves patriots, I get very upset.”

By the time Helen and her family moved to Spain, she had been studying the language and culture for three years. So she had no trouble settling in as she could already interact with everyone around her. “When the locals see my quite Nordic appearance they’re very surprised when I open my beak. ‘You speak so well!’ I know that there’s room for improvement and sometimes I’m even too demanding about myself – I don’t want to make mistakes or have an accent and because of that I’d rather not say some things.”

For her daughters settling in was almost as easy as for Helen: “The girls went to school and on the first day they made new friends. Within a month they were speaking Spanish and by now they’re so bilingual that the younger one even thinks in Spanish.”

For Helen’s husband Tom the process of learning was a bit longer. “He didn’t speak Spanish for three years, just listened and learned. Then one day he decided to start talking. By now he manages some things – like talking on the phone – better than me and when we visit Estonia, he’s even more homesick than I am!”

“If you can speak Spanish, the locals regard you very highly. I’ve never encountered xenophobia,” Helen explains. “Spaniards aren’t prejudiced. In Chinese bars I see Spaniards giving candy to the children of Chinese families – a child is a child for Spaniards, the race or the ethnicity have no importance. And, they adopt quite many children from other races. I don’t know which is the cause and which is the result, but generally there have been no immigrants’ riots in Spain.”

Becoming a full-time author under the Andalusian sun

Back in Estonia, Helen was a journalist, writing about social services and welfare. She has loved writing since she was a child: “Since as a child I got a lot of attention, I knew letters already by the time I was 18 months old,” Helen says. “So quite logically I wrote my first ‘book’ when I was six. It bore a rather high-toned title, “Composed Songs and Stories”. Sounds like ‘greatest hits’ or something.” In school she also wrote quite often: “By hand, of course, and as I was a good drawer, I illustrated my ‘books’ myself. And since during that time there weren’t many novels for young people, mine were quite popular among other kids my age.”

Helen says she has always known she wants to write, and she’s always enjoyed the process of writing. By now she has written six published books and that is partly thanks to living in Spain: “I have opened up here,” she says. “I am not ashamed to express myself fearing what other people might think.”

Helen likes to write in her thoughts when she walks. “I put my headphones on, listen to the music, walk around and when I get back home, any piece of copy is just a matter of writing it down. The ocean is a spectacularly good supporter for this. When I was writing my last book, I didn’t even notice how or when I got back home – I was so deep in my text that I didn’t even realise I had taken a walk.”

Helen’s next book, “We’ll Meet Again” (“Me veel näeme”) will be published by the end of 2013. The book was awarded third place at a novel contest by Tänapäev publishing house in Estonia and is about a seven-year-old girl who gets hit by a car and falls into a coma. “At the time when she learns her lessons, hanging between the two worlds and talking to spirits, her parents’ marriage falls into a crisis because of the accident,” Helen describes her newest work. “Everybody will have to learn something from such a high price paid, and they do. And, of course, there’s a Spanish touch in the book – the action will move to Jerez and one of the main characters is a flamenco dancer.”

Naturally, the fact that her work has received such a high award at a literary contest makes Helen very happy. “This is the work I am very proud and glad of! And people have said the book is very coherent, fluent and passionate. It’s great to hear this!”

From Andalusia to Valencia

When Helen and her family moved to Spain in 2009, they settled in El Puerto de Santa Maria, a small town in the province of Cadiz, right by the Atlantic ocean on the southwestern corner of Spain. In July 2013, however, they decided to move again, but this time within the borders of Spain – to Valencia, a vibrant city on the southeastern corner of the country. “We left Andalusia behind to learn more about other parts of Spain,” she explains. Having moved to the very centre of Valencia – the local “Soho” called Ruzafa – she can now say that life is completely different there than what she was used to in El Puerto. “I’m still getting used to the fact that people are more nervous and busy. In Andalusia everyone was smiling all the time – a non-stop ¡fiesta! and ¡ole!”

However, even though she has decided to live the life of a city girl for now, she does miss Andalusia. “We were so spoiled in this most traditional place in Spain and I do identify myself as an Andalusian. Spain – and Andalusia specifically – have taught me gratitude. I know that I can’t take anything for granted, not this wonderful country, the opportunity to live here nor the people who live around me.”

On the other hand, when in El Puerto they met only one local Estonian – in Valencia the social life of the local Estonian community is much more active. “There are a lot of us and from all areas of life. It’s a really exciting and colourful community, but in my opinion, the one thing that unites us all is an untraditional warmth and companionship. I think Spain has educated us well. It’s so wonderful to be part of this community.”

“Estonians make their lives difficult for themselves”

Although Helen profoundly enjoys the company of Valencia’s Estonians, she doesn’t even want to think about having to live in Estonia – or anywhere else for that matter. “Of course you can’t rule it out that at one point one might be forced to move. But that would make me very sad. Every time I go to Tallinn, I step off the plane excitedly and happily, and I leave with a confused and ill-at-ease feeling that everything wasn’t as I had hoped.”

So how exactly does Estonia look like from Spain? “Small, homely, mystical, quiet, green, quickly developing, self-biting, sincere, inconstant, proud and distrustful,” Helen responds. “It’s a funny and sweet combination really. It’s just sometimes it’s sad that people voluntarily, sometimes even diligently make their lives difficult. Where do they get that life has to be hard? That’s one thing they should learn from Spaniards – living in the moment and being happy about it. The glass is half-full, not half-empty.”

Another thing that Helen is passionate about when comparing Spain and Estonia is solidarity. “It’s more comfortable in Spain, knowing that you won’t be left in trouble or alone. It’s especially about taking care of the weak – children, the elderly and the ill. If people don’t learn to do this – and I’m not talking about the state, but the individuals – the country and nation are eating themselves. Where does this emotional stinginess come from? Or is it cowardice? Being helpful doesn’t take anything away from one, it rather gives something.”

And what could Spaniards learn from Estonians? “First and foremost, keeping promises and being organised,” Helen asserts. “Also, looking at this utter candour I’ve started to respect introverts more as they’re rather scarce here. Many of these people who live on the inside have some sort of an enchanting deepness. They love and care, but they can’t really show it.”

Cover photo: Helen Eelrand with one of the first books she wrote, “Pasodoble”.