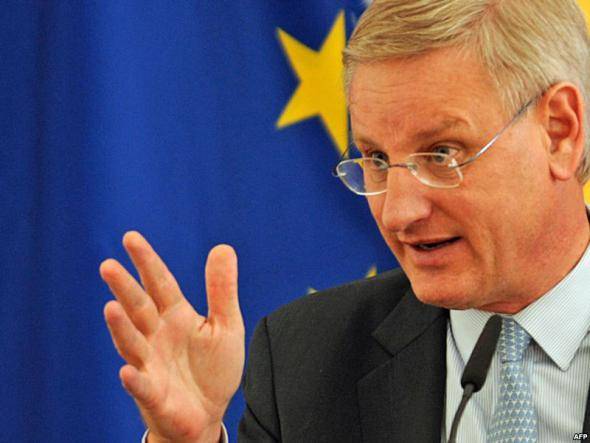 Iivi Anna Masso interviewed Carl Bildt for the Estonian magazine Diplomaatia when Bildt took part of Lennart  Meri Conference this spring. Full version of the article can be found here.

You wrote beautifully in your blog when President Ilves visited Sweden at the beginning of 2011 of how his parents had once come to Sweden as refugees and now he was coming as a president of a free republic. Could you predict this development or foresee today’s Estonia 20 years ago?

We could dream about it, which we did. Could we predict it in a sense that it was certain? No, it wasn’t certain. Things could have gone wrong as well. There were quite a lot of hurdles, quite a lot of difficulties on the road, but it was a dream – no question about it. The fact that it’s been realised is to a major extent due to the far-sighted and wise Estonian policies during these decades.

Estonians like to think about Estonia as part of the Nordic countries. Would the Swedes agree? How well do the Swedes generally know Estonia? Has anything in this sense changed in these 20 years?

Oh, clearly. During the latter Soviet decades, of course, Estonia was beyond the horizon in a sense. It was not entirely unknown, but to a large extent unknown. But then there has been a vast increase in contacts. So, it’s a very different situation now.

Sweden is the most important trade partner for Estonia, but in connection with the banking crisis there was some criticism in Estonia about the Swedish banks making great profits here and then blaming the Baltic peoples when things went wrong. What have we both learnt from the crisis?

There was a credit expansion that went too far, that was really fuelled by the United States. That is really where the crisis had its origins. We tend to forget that. Then it was imported into Europe, including the Baltic states. But I think we managed to sort it out fairly well in our countries. We have preserved the balance. I’ve also said that from the point of view of the Baltic states, it was fortunate that it was the foreign, Swedish banks that really got into trouble – the recent examples we have in Lithuania, not in Estonia. So, from that point of view, the financial integration that we’ve had in the Nordic area has provided stability.

Regarding security and defence cooperation, in a recently published collection, there are different possible scenarios about military threats around the Baltic Sea and Sweden’s possible responses. Do you think Sweden would help us if we got into trouble?

Clearly, inside the European Union we have an obligation to help each other in different ways. Exactly what that would mean in exact situations, no one knows partly because we don’t want it to happen and partly because if it happens, it’s probably going to happen in a way that cannot be predicted. That is what history teaches us. But political solidarity in the European Union is clearly there.

Does the fact that Sweden is not a member of NATO have any influence here?

Not much, I would say. Of course, it has some influence in the legal sense; otherwise not necessarily that substantially. I just visited Tallinn Harbour during a NATO mine clearing operation (Open Spirit 2012); we have five Swedish ships participating there. So, our forces have a very close practical relationship with the NATO forces.

As you do have a tight cooperation with NATO, is there anything left of the ideal of political neutrality for which Sweden also has been known? Is the concept meaningful for Sweden any more?

Looking back a long way in history, how did you manage to avoid wars for 200 years?

Well, history was kinder to us than to our neighbours perhaps because of our geographical location. The last major wars we were involved in were the Napoleonic wars – then we lost Finland. Finland became part of the Russian empire for nearly a hundred years and then had to go through three wars to safeguard its independence. Norway was dragged into WWII for a number of reasons that we know quite well and Denmark was the way to Norway. And, of course, the fate of the Baltic nations is fairly well known. But it was a combination of factors – partly luck, partly the way history shaped itself – that made it possible for us to stay outside.

So, it’s more a matter of luck and circumstances than wise policies?

Primarily geographic location and the way the wars evolved.

President Ilves has emphasised that the ‘Nordic-Baltic 6’ (Denmark, Finland, Sweden, Latvia, Lithuania, Estonia) have more in common between themselves than the EU-17 (the euro zone), even though some of the NB6 are outside the euro zone and NATO. This means that, in a way, regional identity offers stronger commonalities than the official institutions some of those countries belong to. Do you agree with that?

It is certainly the case. In the Nordic countries, we have very close cooperation with each other on a number of different issues. During the last 20 years, the Baltic countries have become more and more part of that. That’s fairly obvious: we are near by geographic terms, we have a fairly high level of economic integration and we see each other eye to eye on quite a number of different issues. We normally have the same approach to most issues and that makes it very natural to work closely together. For example, before every foreign ministers’ meeting, we have the Foreign Affairs Council – we have a breakfast between all of the Nordic and Baltic foreign ministers. And before every European Council meeting, the prime ministers and the presidents do the same.

Should regional cooperation be somehow institutionalised to reflect those de facto similarities more fully than so far?

No, because we’ve got too many institutions. I think it works very well within the institutions that we have – be that the EU, be that in NATO, in certain circles, whatever. We’ve got the Nordic Council and the Baltic Council and cooperation between them. I don’t think we need to set up any new structures now.

The title of the Lennart Meri Conference 2012 was ‘The Future of Democratic Capitalism’. What is your opinion on that future?

I think the future of democratic capitalism is bright. What we’ve seen in the last 20 years has been a spectacular development in a number of different countries – when they started to open up their economies; when we started to expand global trade more rapidly – than we’ve seen before. We have also seen, as a matter of fact, an expansion of democracy. I mean it is not uniform; there have been setbacks. Not everyone is perfect. China is certainly not a democracy, but it is a far more open economy than it was 20 years ago. Accordingly, this leads to economic success.

I just came from Africa that is also part of that particular process. Africa is becoming a more mature, more equal partner to us. That is not uniform either. Zimbabwe is going backwards because it is a different kind of regime. But if you look at Botswana, Mauritius and whatever countries with representative governments, they have good economic development as well. So, I think the pattern is very clear and I think that is going to be the route for the future as well.

At the same time, the number of countries that Freedom House classifies as ‘free’ has reduced.

Somewhat. But if you look at it at a longer perspective, it is increasing. I mean you have ups and downs. But the long-term trend, I think, is distinctly up.

So, you don’t believe the claims about the decline of the West?

No. What you see is that other parts of the world are getting richer and better by adopting open societies and open economies, essentially our values and our interests. So that’s a good thing for us.

Iivi Anna Masso is a political scientist, writer and editor living and working in Europe’s North. Born in Estonia, she has spent much of her life in Finland and has studied and worked in several places from Scandinavia to New York City. Currently based in Tallinn, IAM works as the editor of an Estonian foreign policy magazine, Diplomaatia.