Two Russian Su-24 jets made multiple aggressive passes of US warship USS Donald Cook, a US Navy destroyer, in the Baltic Sea where the Navy vessel was operating in international waters.

According to the US Navy, USS Donald Cook encountered multiple, aggressive flight manoeuvres by Russian aircraft that were performed within close proximity of the ship. The incidents occurred on 11 and 12 April.

On 11 April, “Donald Cook was conducting deck landing drills with an allied military helicopter when two Russian SU-24 jets made numerous close-range and low altitude passes at approximately 3 pm local,” the Navy said in a statement. “One of the passes, which occurred while the allied helicopter was refuelling on the deck of Donald Cook, was deemed unsafe by the ship’s commanding officer. As a safety precaution, flight operations were suspended until the Su-24s departed the area.”

On 12 April, while the US destroyer was operating in international waters in the Baltic Sea, a Russian KA-27 Helix helicopter conducted seven circles at low altitude around the ship at approximately 5 pm local time.

“The helicopter passes were also deemed unsafe and unprofessional by the ship’s commanding officer,” the Navy said. “About 40 minutes following the interaction with the Russian helicopter, two Russian Su-24 jets made numerous close-range and low altitude passes, 11 in total. The Russian aircraft flew in a simulated attack profile and failed to respond to repeated safety advisories in both English and Russian.” 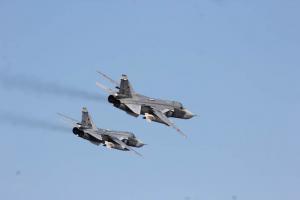 The Commander of the US Naval Forces in Europe and Africa, Admiral Mark Ferguson said USS Donald Cook was operating in a professional manner.

“In my judgement, [the Russian] manoeuvres in close proximity to Donald Cook [were] unprofessional and unsafe,” the Admiral said.

US Navy has “deep concerns” about the Russian flight manoeuvres.

“These actions have the potential to unnecessarily escalate tensions between countries and could result in a miscalculation or accident that could cause serious injury or death.”

According to the media, the incident was one of the most aggressive interactions in recent memory, and reminiscent of the Cold War.

The incidents happened as NATO plans its biggest build-up in eastern Europe since the Cold War to counter what the alliance – and in particular Estonia, Latvia, Lithuania and Poland – consider to be a more aggressive Russia.