The European IT Agency has been called the biggest IT challenge for the entire European Union. What does the agency do, how did it come to reside in Estonia and what is the meaning of such an institution for the local entrepreneurial environment? 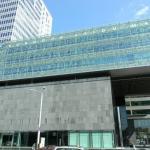 In December 2012, the European Agency for the operational management of large-scale IT systems in the area of freedom, security and justice – eu-LISA – finally opened its doors. The location? Tallinn, Estonia.

The work of the agency has so far gone publicly unnoticed. But that’s not without a reason. Since the agency has to maintain the security of the entire EU in several fields, the work done behind closed doors is obviously not the type that everyone should be able to have a peek at.

The biggest IT challenge in the EU

The IT Agency has also been called the biggest information technological challenge of the whole European Union. Any country to host the agency should be titled a high-level provider of e-services and IT solutions all over Europe.

We met with Piret Lilleväli, adviser from the Ministry of the Interior, and Ave Poom, policy adviser for eu-LISA, who helped us understand how a small country like Estonia succeeded in bringing such an important agency into its backyard and the impact of hosting the institution.

Estonia vs France – from competition to cooperation

Estonia had been preparing its candidacy for the seat of the Agency for almost two years before the European Commission even presented the draft regulation of the European Parliament and EU Council establishing the agency in 2009.

By that time it had become an established fact that IT systems were extremely important in guaranteeing the internal security of the EU. In line with other risk-reducing measures, like police cooperation and internal migration control, IT solutions are considered the main cornerstones of reducing cross-border risks.

When we talk about the specific systems, there are currently three cornerstones that ensure the internal security of the European Union:

Since December 2012, Estonia is responsible for the operational management of these large-scale databases through eu-LISA.

“We were not interested in bringing just any kind of agency to Estonia. IT is what we, Estonians, all understand and what we appreciate. It is part of our national image. We already host the NATO Cooperative Cyber Defense Centre of Excellence, so our line of thought was that if you have an important IT institution like that, it makes sense to expand further in this specific area — this is what we started to fight for,” Piret Lilleväli tells us. This brings us to the competition between Estonia and France.

France had managed the first generation SIS system for the member states before the Agency was created, so it automatically became the main candidate for hosting the Agency as all the systems were there. Estonia’s candidacy was based on a particular decision made by the European Council for new EU institutions to be located in new member states combined with the years of work that Estonia has done in building up its reputation as an e-state.

With negotiations over the agency’s location lasting more than a year, a compromise was eventually reached. The headquarters, including its functions and IT development, would be based in Tallinn, Estonia, while the systems and the technical solutions would remain in Strasbourg, France.

Staying ahead of the criminals

Today, the main task of the agency is to take over the old systems from the European Commission and to ensure their functioning. “Our main focus is on SIS becoming operational, or actually SIS II, the second technical version of the system,” Lilleväli explains.

According to her, the postponing of the implementation and the increase in the planned cost has made European countries skeptical about the new system. In addition, some of the countries don’t feel safe about keeping the data in the agency’s large databases. “We are hoping that the agency will help to turn this skeptical attitude around and allow for more common IT solutions to be used for protecting European internal security. At the moment, it seems that the criminals are one step ahead of us,” she adds, half-jokingly.

Through its procurements, an agency of this type has the power to benefit a whole array of companies and organisations. This leads to collaborative enterprises that have a way of creating synergies. “In the case of the IT Agency, it’s quite likely that Estonians will not have the resources and know-how to participate in the procurements on their own, which leads them to join forces with other countries. As a side benefit, the workforce for the projects is likely to be employed from Estonia,” Lilleväli explained.

According to her, many well-known IT companies have already shown interest in bringing their sub units near the agency. There have also been events to introduce the developers and managers of Estonian information systems to the IT director-general Krum Garkov. “With this we are creating a support system for exchanging ideas. I’m certain that future IT success stories will have their origins in these contacts,” Lilleväli expressed.

At the moment, 13 people are working in the Tallinn headquarters of the IT Agency, five of them Estonians. Hiring is being done throughout the EU member states.

“People working in the Strasbourg data center have more background in information technology; people working in Tallinn are from administrative fields. It is mostly because the main tasks of the headquarters in Tallinn are running the organisation, coordinating tasks with other facilities (mainly with EU institutions and facilities responsible for internal security and IT administration in member states), reporting to the European Commission, the Council and the European Parliament according to the Agency’s regulations, and managing internal/external communication as well as finance and other administrative questions,” Ave Poom described.

The goal is to reach 48 employees in the Tallinn office by the end of this year. While the agency is international to the core and may not boast a huge staff compared to international enterprises in the private sector, it is clearly a milestone in gathering top-level IT competence to Estonia.

What kind of information systems does the IT Agency administer?

This article was brought to you in collaboration with e-Estonia: http://e-estonia.com/