We jumped into ice cold water during a sauna session to vote in Estonia’s parliamentary election. Just because we can.

Estonians can do almost anything online from anywhere  – including choose their parliament in just a few clicks.

Voting is currently taking place online for Estonia’s next parliament, Riigikogu, so instead of queuing up at a polling station, we enjoyed a sauna at home and thought it would be fun to demonstrate how easy it is to vote securely online while cooling off in ice-cold water.

First, a quick introduction. I’m a UK-born Estonian (hence the accent) and I work at Estonia’s e-residency programme with Alex and Reelika – my colleagues who are also in the video published here. As with voting, I wrote this article on my day off, though.

We already do almost everything else online, using our secure Estonian digital identities, which enable us to prove who we are online and provide legal signatures online. These are a key component of how our digital nation works and were introduced back in 2002 for citizens and residents. It works for e-services from both the public and private sector  – from filing annual taxes in a few seconds to daily banking.

Estonia became the first country to introduce secure online voting (known as i-voting) back in 2005. This isn’t the same as mere electronic voting in other countries when a special machine is used inside the polling station instead of pen and paper.

Just 1.9% of Estonian voters used the digital option in 2005, although this had risen to 30.5% a decade later in our last parliamentary election. More importantly, overall voting turnout has remained steady even as it has declined in other countries.

By the way, Estonia didn’t build its digital nation just to be used by young and trendy tech enthusiasts. Digital solutions, like i-voting, are popular across all demographics and it particularly helps those in rural areas (and Estonia is one of Europe’s most sparsely populated countries) or those with less mobility, such as the elderly.

It will be interesting to see the response this time, but it is likely to be high. Many Estonian companies are now encouraging their staff to take ten minute breaks in order to vote (which is actually a minute to vote and nine minutes to enjoy a coffee) and even Facebook is sending us reminders this time: 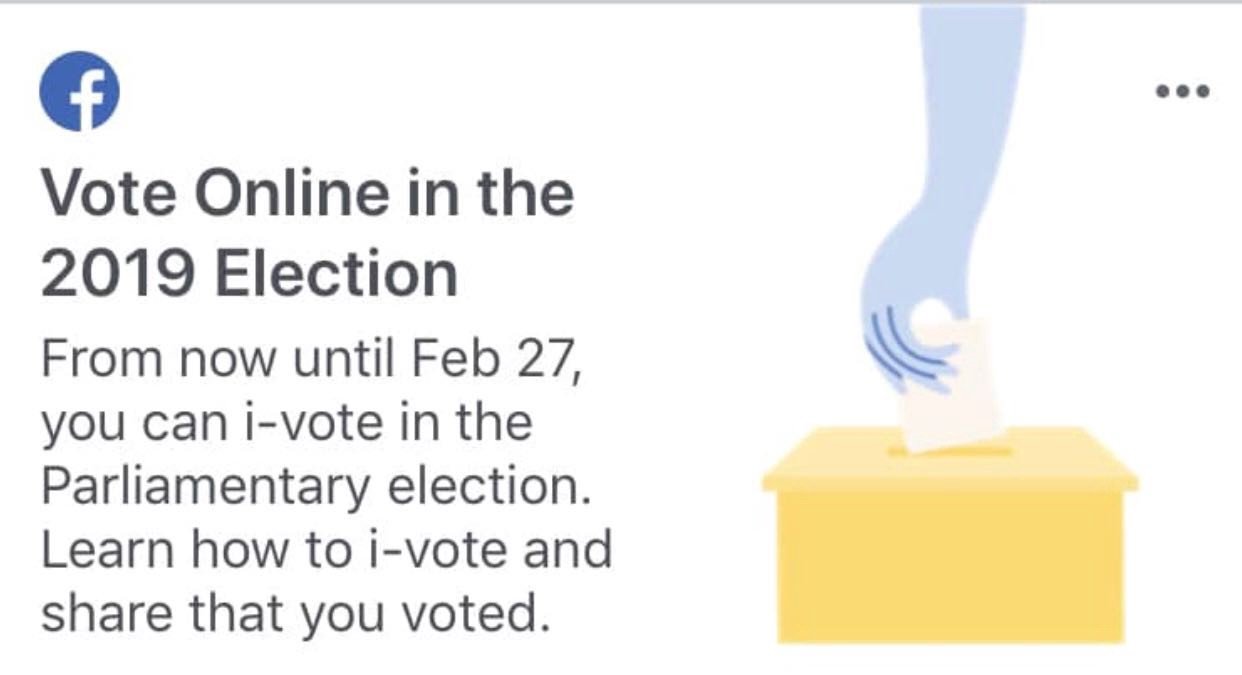 How to vote online

Here’s what we had to bring with us into our icy, makeshift polling booth:

i-voting software. It takes just a few seconds to download the software onto our computer from valimised.ee. This bypasses the browser so we can vote securely.

A digital ID-card / mobile-ID. Estonians have the same digital identity for life, but the technology we use to manage that digital identity evolves over time. Digital ID cards, like the one Reelika is holding, are the most well-known globally because they are also used by our e-residents. However, I’m using my mobile phone because it has the ID certificates embedded into the sim card, which is called mobile-ID and is available to citizens and residents through their Estonian phone contracts. Either way, the digital ID system works in the same way with separate PIN codes for authenticating our identity and giving a signature. 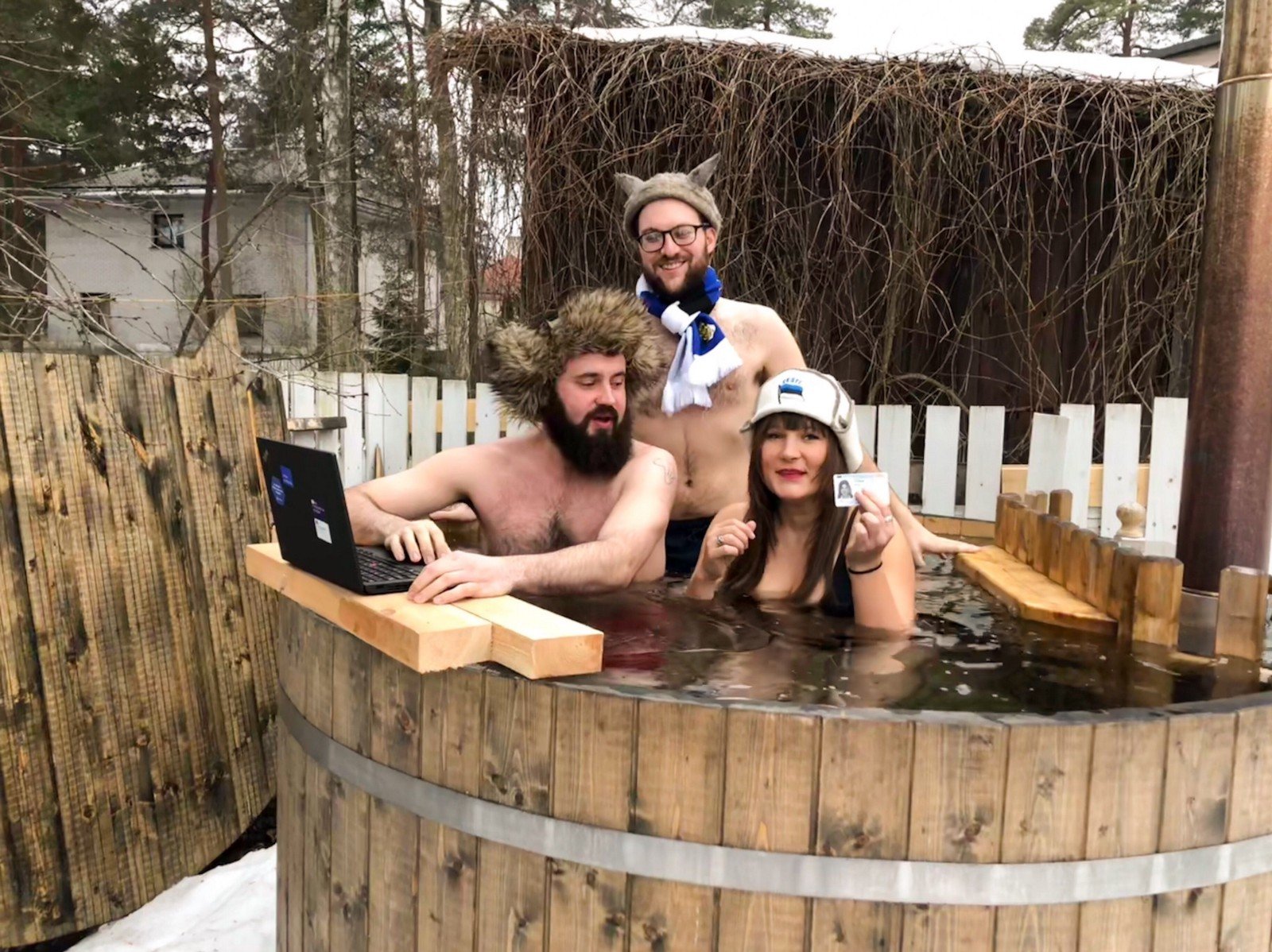 Sense of humour. Please don’t comment to say voting during a sauna is silly! We know it is. The point is to give people an insight into Estonia and raise awareness of how governments everywhere can serve people more effectively online anywhere that is convenient to their people. We just happen to like saunas, too.

By the way, that water is so much colder than it looks! 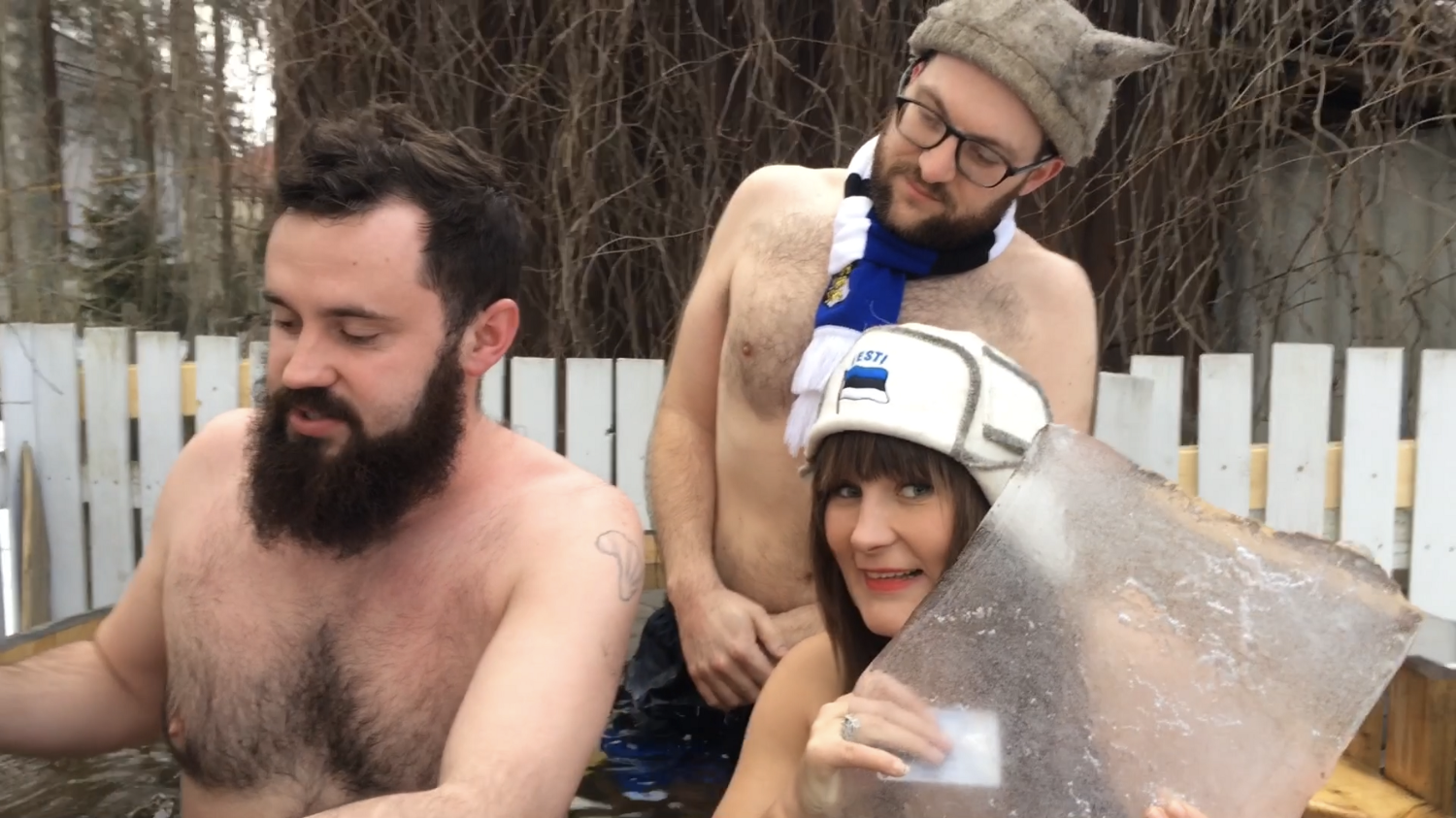 Whether using a digital ID card or mobile-ID, the first step is to authenticate our identity.

I opened the i-voting software, then entered my phone number and my personal ID code. After that, both my phone and computer displayed a verification code simultaneously. I checked that they matched, then clicked “accept” on my phone before entering PIN1. That authenticated my identity and logged me in, so the next screen displayed my details, including which constituency I was voting in.

Anyone who wanted to pretend to be me would need my PIN numbers and my mobile phone. We also believe that basic “cyber hygiene” is essential for operating securely online, which is why I already changed my PINs before uploading this video just in case someone tried to analyse my thumb movements! 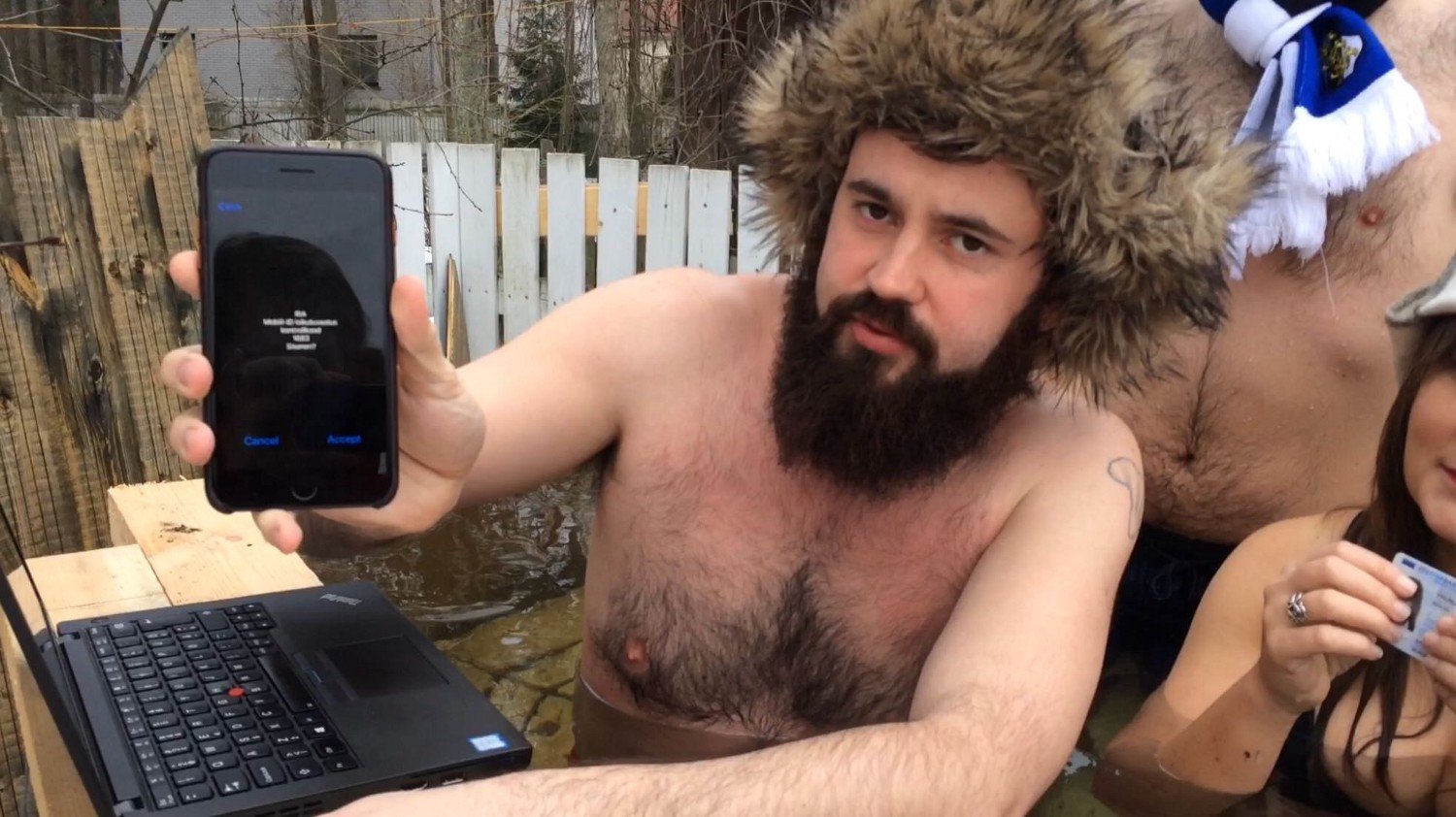 The next screen displays a list of parties and candidates for me to choose. I’ll be honest, I haven’t decided who to vote for yet, so I just picked a random candidate during the video.

Don’t worry, though – I’m not trivialising democracy! One useful feature of online voting is that we can vote as many times as we want and then each new vote overrides our previous vote. That means we can change our mind during the election period and can never be forced or bribed to vote a certain way. Actually, you can try to bribe me if you insist and I’ll just take your money then vote again afterwards for who I want!

No matter which candidate I choose, there’s one topic that isn’t a big issue in this election, though: our digital nation itself. Doing things instantly and securely online is just more efficient and gives us more time to focus on important stuff – regardless of which side of the political spectrum you fall on. Few people want to go back to paper.

I completed the voting process using my PIN2, which is for giving a legal signature. I already enter this PIN on a daily basis, such as to make a bank payment or sign a document.

After casting my vote, my phone beeped again, and I checked that the verification codes matched on both my computer and phone screens before clicking accept. 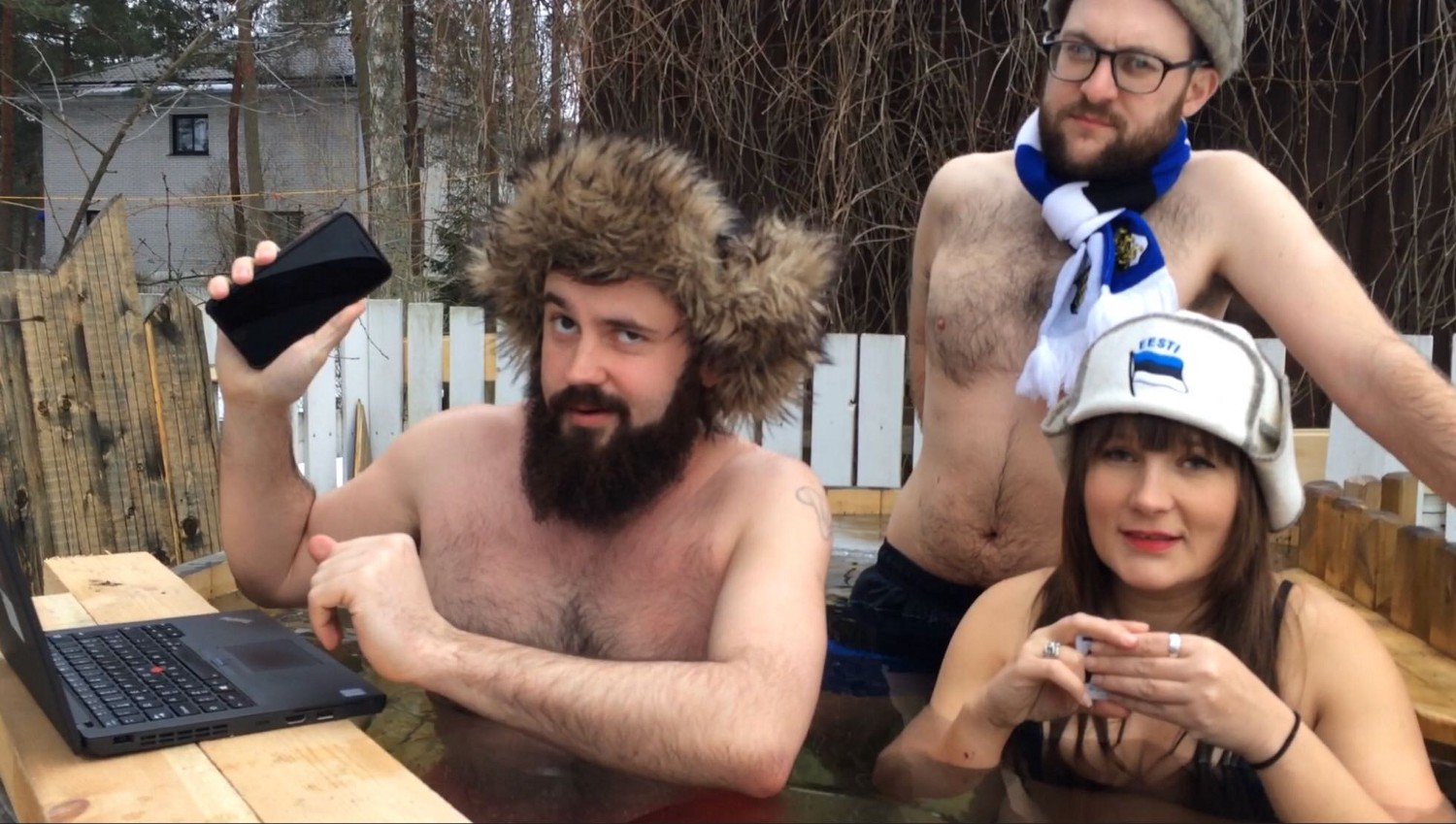 I then entered the PIN2 to complete the voting process. Cryptography is used to insert my ballot into a digital “double envelope” that guards the secrecy of my personal vote, similar to how it is done offline for postal voting. The outer digital envelope is used to transmit my vote to the electoral commission and then, the inner digital envelope is taken out and decrypted so it can be counted with my personal details removed.

The most fundamental component of our digital nation  –  including i-voting  –  is trust. Our digital nation will never be perfect because it’s continuously evolving, and risks need to be managed along the way.

Estonians don’t have blind faith in their government, but they trust digital solutions for two main reasons: their own experience of how it empowers them and their own knowledge of the checks and balances that are designed into the system. For example, citizens own their own data and we use blockchain-like technology in some cases to control access to it and punish any breaches of trust (such as a medical professional who has access to our health records). None of this is possible with paper, which is the real faith-based system of governance.

Just like with offline voting, Estonia welcomes election monitors who scrutinise the i-voting process. We can also scrutinise the process ourselves as voters. There’s a mobile app (separate to the mobile-ID) that anyone can download from the electoral commission to verify that our individual vote was correctly delivered. I simply scanned the code in the i-voting software, and it opens up my ballot that was securely delivered to the electoral commission to let me see what is inside. 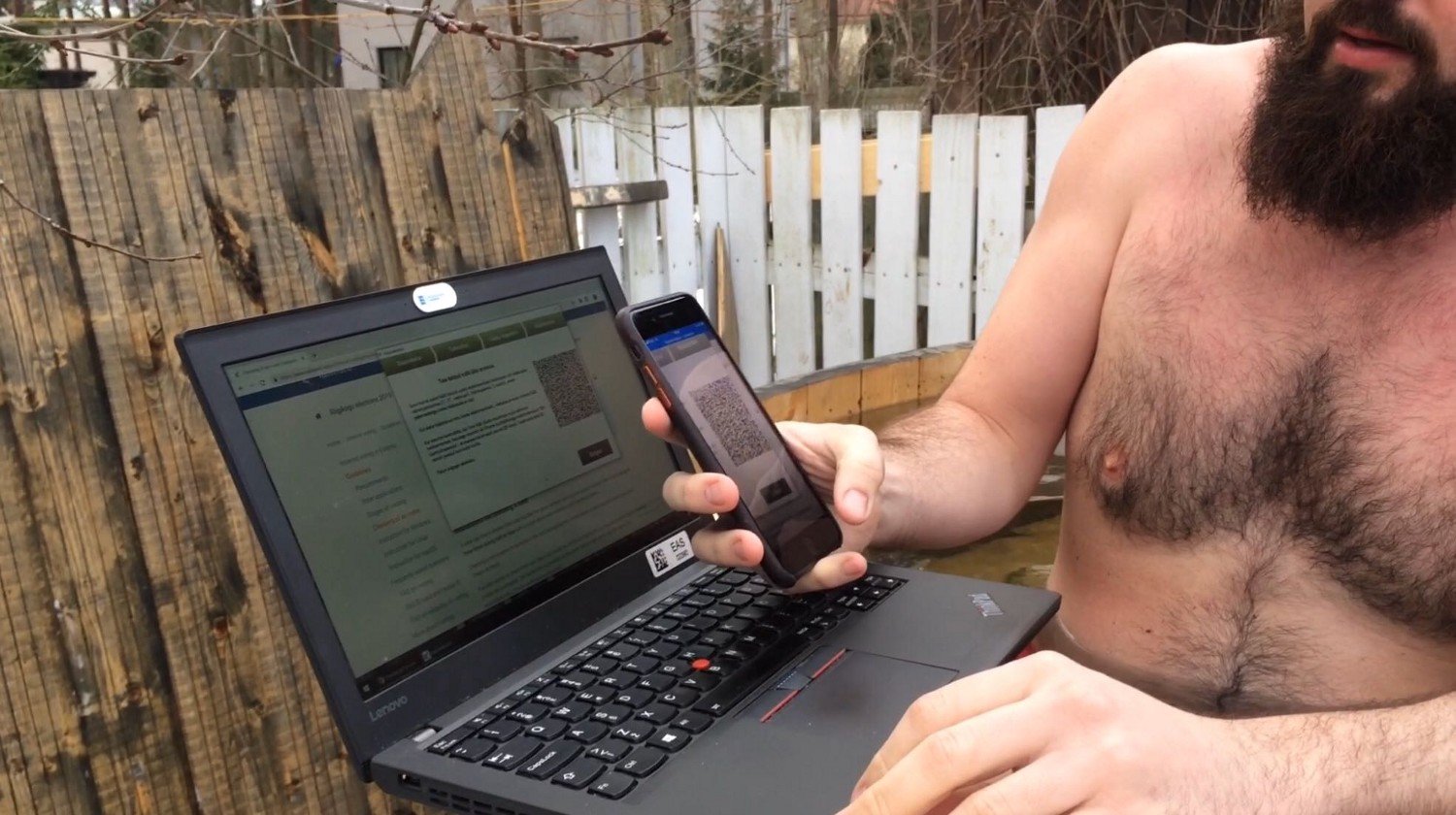 Finally, there is the ultimate fallback. I-voting takes place before the actual polling day so if there are reasonable grounds to suspect that the i-voting system has been compromised, then all digital votes will be nullified, and we must all go to the polls instead.

This would be a lot of hassle to us, but the integrity of our elections will always come first. Plus, this is what most people consider normal  –  if they are even fortunate enough to have a democratic vote.

Oh, and by the way, we did all this on the Republic of Estonia’s 101st independence day! Happy birthday, Estonia, and thank you to everyone who’s supported us along the way.

This is a lightly edited version of the article originally published by Adam Rang in Medium. You can follow Adam’s take on Estonian sauna culture also on Instagram, Facebook or Twitter. Cover: Adam Rang, Alex Wellman and Reelika Virunurm voting from their tub.