On 29 August 2003, six people from Estonia, Sweden and Denmark launched a new product in Tallinn. On its first day, 10,000 people downloaded it. Few months later, it had a million users. Ten years later, it is used by 300 million connected users around the world. The product is called Skype.

It was initially called Skyper, itself derived from Sky Peer-to-Peer, but due to the fact that domains under that name already existed, the name was changed to Skype. 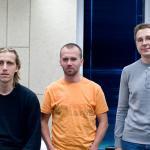 Although the initiative to set up Skype came from two Scandinavian entrepreneurs, Danish Janus Friis, and Swedish Niklas Zennström, its software was written by three Estonian developers — schoolmates Ahti Heinla, Priit Kasesalu, and Jaan Tallinn. Three Estonian boys were drawn to the Digital Age even before Estonia restored its independence in 1991. In the late 80s they created computer games and in 1989 managed to become the first Estonians to sell their game abroad when a Swedish developer bought their game ‘Cosmonaut’ for 5,000 dollars.

The fourth Estonian of the original team, Toivo Annus, played a major role of managing the first Skype’s office, as well as engineering and core p2p network team.

At the turn of the millennium, the team collaborated, honed their skills and developed new ideas by working for Swedish telecommunications company Tele2, as well as setting up Kazaa — peer-to-peer file sharing application, which was used to exchange MP3 music files and other file types, such as videos, applications, and documents over the internet. Kazaa became the world’s most downloaded Internet software in 2003, but after lawsuits were filed by members of the music and motion picture industry in the USA, it was sold.

Since six men ran into legal troubles with Kazaa, new ideas were generated during sleepless nights in Tallinn and finally a eureka moment experienced when they realised that they could use P2P technology to create an “internet phone.” Thus, Skype was born, allowing users to communicate with peers by voice using a microphone, video by using a webcam, and instant messaging over the Internet.

Blessed with user friendly interface, designed by Dane Malthe Sigurdsson, Skype became an overnight success and their workforce grew fast. Although it was registered in Luxembourg and had its marketing office in London, the firm’s largest office with main development team was based in Tallinn. This was the first time that a truly global multinational start-up was being created and nurtured from this relatively small city and therefore had an enormous impact on Estonian start-up ecosystem.

At least until very recently, talk of the current Estonian start-up expansion, both within and outside its borders, invariably came back to one magic word: Skype. As Taavet Hinrikus, Skype’s very first employee and now a serial entrepreneur, running his own successful start-up — TransferWise in London — explains, “By creating, having and maintaining Skype in Tallinn, we gained a great insight on how to launch a great global product and it created a feeling that we can create big things in a small place.”

This new start-up with global ambitions became a base for learning new skills and inspiring new ideas. It also helped to create a new philosophy and can-do attitude for aspiring Estonian tech-entrepreneurs. As the former Head of Skype Estonia, Sten Tamkivi explains, “We came to believe that being small is an advantage: It’s not about manpower, it’s about finding creative, effective and innovative solutions to a problem. Being small is not a disadvantage; it just means that you need to think about exporting products right from the beginning. To put it simply, the question “What do I have to contribute to the big diverse world?” is incorporated deep in your company’s DNA. ”Look at the impact that the first four Skype engineers, sitting in Tallinn, had on the world today,” says Sten. Indeed, today it has 300 million connected users around the world and a third of all international telephone calls now go through Skype.

Skype also provided many young Estonian programmers and software developers with share options from the start — which meant that when Skype was sold to eBay in 2005 for US$2.5 billion, many gained seed capital to start on their own. According to Sten Tamkivi, 36 people with Skype background (or #SkypeMafia as Tamkivi calls them) have founded their own business since leaving the company, TransferWise being the most notable so far. Many more have since got involved in other start-ups or offering their expertise to companies around the world. Tamkivi himself has just joined a top venture capital firm Andreessen Horowitz in California, as Entrepreneur in Residence. Jaan Tallinn has resently co-founded a personalised medical research company MetaMed.

Skype has also made the life easier for those responsible for promoting Estonia abroad — it is still the only truly global brand which can be associated with Estonia. And although now owned by software giant Microsoft, it still employs almost five hundred people in Tallinn.

Sure, Skype has recently also faced criticism for resting on its laurels and for an occasional unreliability. But it is difficult to overestimate the snowball effect it has had on Estonian start-up ecosystem: the idea that new ‘skypes’ could be developed and launched from this tiny Northern European country.

Ironically, on the very day Skype celebrated its tenth anniversary, a group of its former employees launched a product called Fleep, an iOS app and web-based chat tool, aimed for small businesses and organisations. It is led by Henn Ruukel, a former director of site operations at Skype, and backed by $345,000 in seed funding from Jaan Tallinn and Priit Kasesalu, Skype’s founding engineers.

2 thoughts on “Skype and the Estonian start-up ecosystem”