For the fifth year in a row, Estonia´s joint stand at the world´s largest trade fair for industry and technology in Hannover, Germany, hosted 11 companies presenting their newest products, applications and services. This year, the Hannover Trade Fair broke its own previous records, attracting 6,550 exhibitors from 62 nations and about 225,000 attendees. 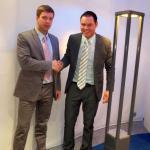 Joining the Estonian stand in a happy-hour meeting, discovering the clever and innovative solutions and products presented by the Estonian companies, and talking to the representatives of Enterprise Estonia, the importance of Estonia´s participation at Hannover Trade Fair cannot be emphasised enough.

Riina Leminsky, chief representative of Enterprise Estonia in Germany, states that participation at Hannover Trade Fair is very important to both the Estonian state, as well as the individual companies. Thanks to the support of Enterprise Estonia, a joint Estonian stand in the hall of innovation and technology has been organised for already five years. “The location of the stand enables us to introduce Estonia as an environment suitable for the integration of industry, technology and science; an environment where the conditions of a business environment allow companies, universities, science institutions, manufacturers, and the IT-sector to work well together. Our main goal is to break free of the reputation of being a cheap Eastern European subcontracting country; sadly this is still the image that some Western European countries have. Yet we can already report that there has been a lot of development thanks to the Hannover Trade Fair where people now visit our stand to witness our products and new innovative technological solutions”, explains Leminsky. 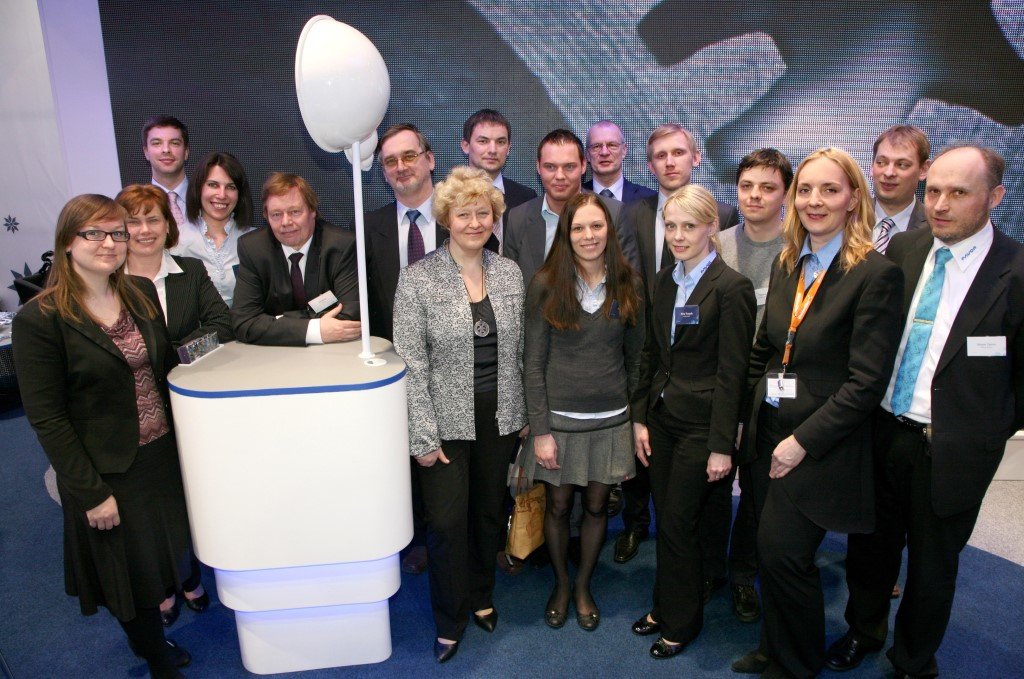 Uniflex Systems Ltd. – hoping to take give Siemens a run for their money

Uniflex Systems Ltd., presenting at the fair, is intending to compete against Siemens with their Android-based universal automation controller. Using the UniSCADA – Universal Supervisory Control and Data Acquisition server, the new controller has many advantages compared to traditional controllers from big and well-known manufacturers. The application software running on the phone can be written in any language. The controller can be used for a variety of tasks, for example  traffic lights, street lighting, pumping stations, entrances, surveillance, smart home features, etc. In Estonia, it is already being used for ferry port automated entry systems (Virtsu, Kuivastu, Rohuküla and Heltermaa ports); for control and monitoring of fresh and sewage water pump stations by Haapsalu Vesi, as well as for surveillance and controlling of Mäo crossroads.

Peeter Hagen, Sales Director of Uniflex, and Neeme Takis, Managing Director, explained that their mission is to overthrow the domination of Siemens in the field by offering better and less expensive solutions. They explained that the traditional controllers produced by other companies usually have limited capabilities and are usually much more expensive. Their Android-based automation controller does not need a separate communication device and operator panel which enables to keep the price up to three times lower, while still offering more solutions and flexible applications.

Molycorp Silmet – the only company within the EU producing rare metals

Molycorp Silmet is a company based in Sillamäe, a small industrial town in north-east Estonia. Its history dates back to a time of the first period of Estonian independence and the company has faced difficult times along with the country. Aili Arming, Project Manager at Molycorp Silmet explains that this is their first time to participate at Hannover Trade Fair. She states that they are concentrating more on establishing useful contacts, and less on the actual sales. “We would like to inform people about Estonia as well as our company, and establish contacts and ties to European organisations and science institutions. There are so many tiny components made from our rare metals that people use every day, and they are usually all made in Estonia. In almost every cell phone there is a piece of metal from our production. We are practically the only company within the European Union producing rare metals. In the world market, over 99% of production comes from China, so our portion makes up the 1%.” Molycorp Silmet invests a lot in their research and development, boasting a new laboratory with state-of-the-art equipment. “This also allows us to extend our cooperation opportunities, for example we can offer the use of our laboratory to scientists. We have already had visits by professors from the University of Tartu who were very impressed with the laboratory”. 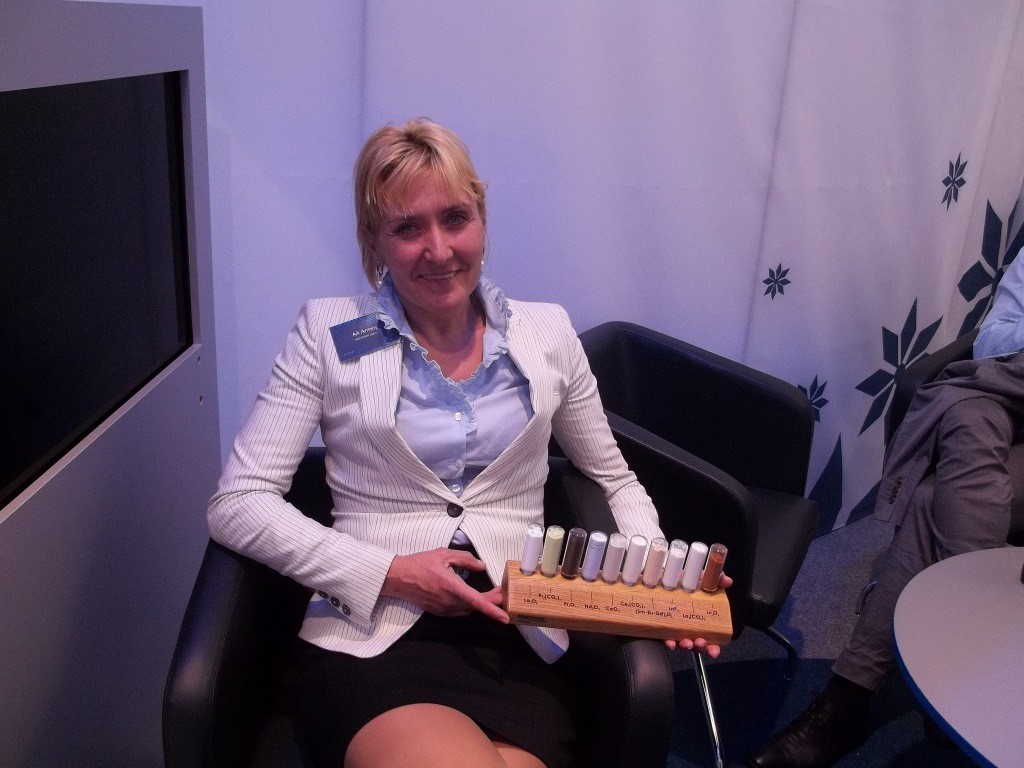 Moving on, I meet Kadri Liivat, export manager at Pelltech OÜ. Pelltech is an international company operating from the Mõigu technology park close to Tallinn, and also taking part of the fair for the first time. Ms. Liivat explains that their pellet burners just received the necessary approval for the sale in Germany and have already received positive feedback from their German reseller.  Her colleague Aavo Isak lists the main benefits of pellet burners: they are simple to use, save lot of money on heating costs, and can can easily be installed into most boilers using solid or liquid fuels without having to re-built anything. “We export around 90% of our products, and our pellet burners are already known all over the world. They use them in Canada to make maple syrup, in Argentina to bake pizza, in Estonia to heat the NATO Cyber Defence Centre in Tallinn. And in Russia – well, I think they use it for heating the prisons over there. The only continent not using our products (yet) is the Antarctic!”, proclaims Isak.

Villu Reimann, General Manager at Carisma Sweden/Tahe Industries introduces their main products at the trade – vehicle roof boxes made of high-quality glass fibre or polyethylene, which are basically unbreakable. Carisma Sweden, the brand for vehicle roof boxes and trailer hard top covers is the latest addition to Tahe Outdoor group’s portfolio. Tahe Outdoor Ltd is one of the leading companies in Europe in the field of kayaks and kanoes production, offering products that are light, extremely strong, user-friendly and with an outstanding Scandinavian design to fit every car. Additionally, the product range was also extended last year with adding Carisma Hard Top Trailer Covers to the selection.

Edgar Haavik, CEO and founder of myLAMP, and also the man behind his own inventions reminisces that his idea for his products took root at the Hannover Trade Fair in 2011 (after a couple of beers). His company, myLAMP designs and produces LED-lights for street lights and special applications, mostly designed and patented by himself. “I am an electrical engineer, and fascinated with the world of electric lighting ever since I was as a child. I basically started with the idea of Chinese street lanterns, and though the process of reverse engineering, took away the unnecessary details, creating high quality LED-lights which are simple and resistant, while being able to offer very competitive prices”, explains Haavik. He is also very passionate about Estonia and its future, and says he would like to invest in Estonia more than anything: “I choose all my business partners from Estonia, I believe in trading out know-how as well as service and being able to develop together, not only competing with another. My hobby is also my work and I am very passionate about what I do. I think this is the main key to success.”

Discussing further the subject of co-operation within Estonia, Edgar Haavik emphasises that Estonia is small, but there lies great strength in co-operation. Villu Reimann agrees with him completely: “There is great potential to be found in Estonia, many of my projects have been successful especially thanks to co-operation.” They both agree that in order to succeed, there also has to be more flexibility and simplicity in working together. Villu Reimann also underlines the importance of outstanding design and great development in his company´s products, whereas Edgar Haavik states that the success of myLAMP´s LED lights lies in minimalistic and simple solutions. They both agree that there is a lot of beauty and practicality in Scandinavian or Nordic design, which is represented in many Estonian products.

Riina Leminsky from Enterprise Estonia confirms that there has been a lot of positive feedback from the companies taking part in the joint stand. Although some of the companies would prefer more specific trade fairs to target individual customers, the overall reputation of Hannover Trade Fair as the biggest industrial fair cannot be overlooked. “The fair is ever-growing (more than 225,000 visitors this year), and the stands are usually booked years in advance. It is rather difficult to even book a place here as a single company, and the smaller stands are often overlooked due to the bigger companies with huge stands. The joint stand allows the Estonian companies to present themselves together and united, and definitely to achieve more attention than alone. Although there has been a discussion in previous years whether the companies offering subcontracting would do better in the specific hall for subcontracting and outsourcing, then the opinion is still that the joint exhibition in the innovation hall gives companies a better opportunity to integrate themselves into the global chain of value.

“Besides the exhibiting companies, the Estonian stand has also proven to be a great meeting place for other visiting Estonian companies who can also organise their appointments at our stand or invite their partners and clients for a visit to introduce Estonia´s business prospects and opportunities more closely. There are also traditional events as our happy-hour reception at the stand, as well as the joint event with the Estonian Embassy (in Berlin) in co-operation with Baden Württemberg International. The delegations of German state Baden-Württemberg and Brandenburg also pay a visit to our stand every year.”

A short conclusion of the Estonian stand is also available: 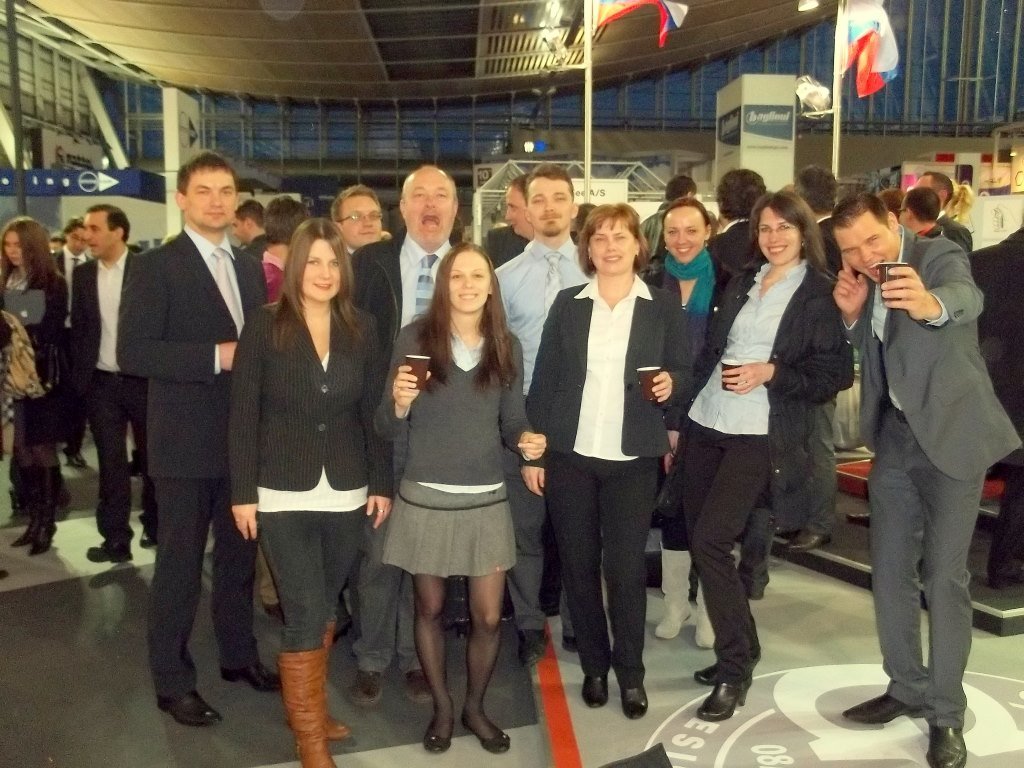