Summer is about to arrive in Tallinn, and the sudden leap to high season brings thousands of tourists every day to the old town, drinking in its sights, hearing its legends and battling with the capricious weather. Six months after arriving, a British expat Claire Millard occupies a no man’s land between the scratched surface of the tourist visitor, and the through and through, shaped and coloured by the city, of the local – feeling already like an old hand, yet not completely blending in as a local.

It’s the start of the tourist season. The flower stalls are multiplying, dotted around street corners, lining the extremities of Freedom Square, and perched on the unforgiving stone wall by the Viru Gate, where the fur-coated ladies are offering wild garlic and snowdrops – small hints of spring among their usual fare of heavy knitted socks. Bunches of blossoming branches are waved at passing tourists, sold for a few cents as a reminder of the arrival of milder air. Crocuses are starting their show among the box hedges which have been carefully relieved of their fleeces which protected them against the harshness of winter.

A gaggle of teenagers in matching woollen hats, taking part in a school cultural trip mill round in front of McDonalds, warming their hands with paper cups of coffee and clinging to the familiarity of each other and the standard operating procedures of a multinational chain. Periodically one of them breaks from the herd and trips over to the picturesque gate to pose for a hasty picture on their iPhone. Their attention seems more focused on their electronic devices than the striking remnants of the city walls, and the atmospheric ruins of the gate that has welcomed friends and defended against foes for centuries. 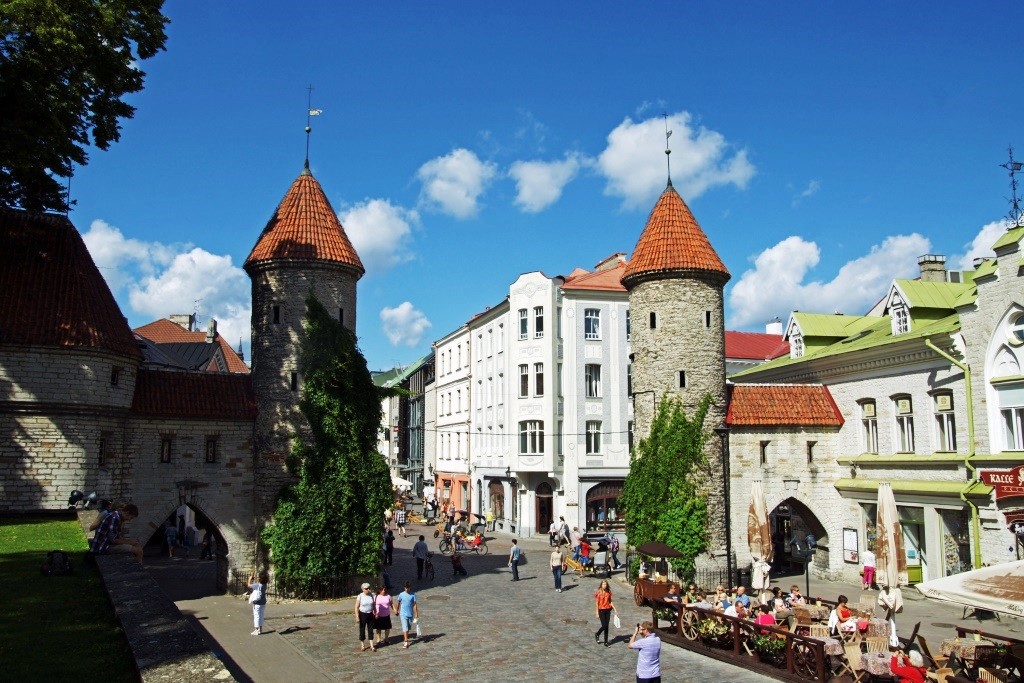 A local company, Gourmet Monk, has opened additional, inescapable stalls on every street corner and the air is thick with the sugary scent of overpriced novelty nuts. Bored and uncomfortable looking girls in heavy mock mediaeval garb offer wooden ladlefuls of almonds to groups of passing pedestrians who fish round in their purses, carefully examining the unfamiliar coins before parting with them. Walking on, the experience of Tallinn will last in their memory as a cinnamon-flavoured sugar rush.

The weather hangs heavy still, one of those days when the wet is both falling and rising, mist shrouding the cobbles and low cloud hiding the church towers. In between, there is a damp chill which eventually gnaws through even the thickest of coats. Nonetheless, it is the brief period when optimism and opportunism in the local restaurant owners have triumphed over the just-look-out-of-the-window test, resulting in a border of decking and notably vacant tables edging the town hall square, looking no more enticing in the fug for the sheepskins layered out over the backs of the chairs.

The tour groups have landed. The mixed tones of chattering in a dozen different languages echo softly from the cobbles. Several groups congregate at different corners of the square, as though in tacit agreement that they will not encroach on each other, guides hold umbrellas aloft and, with clear enunciation, retell the time-tested tales of the square.

Curious groups peer into the old apothecary where, according to an Estonian legend, marzipan was invented. A shuffling party of cruise tourists pull tight their jackets and look at their feet, shifting nervously as their guide revels in the gruesome tale of the only public execution to take place – “on this exact spot of the square”. Elsewhere, necks crane upwards to see the weather vane celebrating Old Toomas, the boy who won a prestigious archery competition and then went on to protect the city from siege.

But I am not one of the tourist hordes. I share the fascination with the sights and the city, I share a mystification with the Estonian language and the inability to pronounce the simplest of Estonian words without receiving tutting correction; but I consider Tallinn to be home nonetheless. I have my residence card and voting papers for the upcoming election. I know where to get the best pirukad (pastries) and which of the timed road crossings you can get across at sedate pace and which seem designed to make you dash across before the relentless rumble of cars restarts. I even understand the municipally-sponsored game of chicken that is required to board a tram, making firm eye contact with approaching car drivers and walking purposefully into the road to get aboard, however ill-advised and contrary to survival instincts it may seem.

“I share the fascination with the sights and the city, I share a mystification with the Estonian language and the inability to pronounce the simplest of Estonian words without receiving tutting correction; but I consider Tallinn to be home nonetheless.”

And yet, on my daily walk through the town, approximately every ten paces, another caped figure looms towards me and tries to thrust a leaflet advertising a tourist “experience”, a restaurant or a museum. I walk alone. I am not carrying a camera or guide book. I am not shivering, hopelessly underdressed for the rigours of the Baltic spring, trying to trundle a wheeled case over the uncooperative cobbles. I wear the unofficial uniform of padded coat and long leather boots, and the reflectors required by law to protect me in the absolute darkness of night-time outside of the Old Town. Apart from the skill of walking in stilettos over treacherous eight hundred year old stones, which I am afraid I will never acquire, I can see nothing in my outward appearance that screams “tourist”. 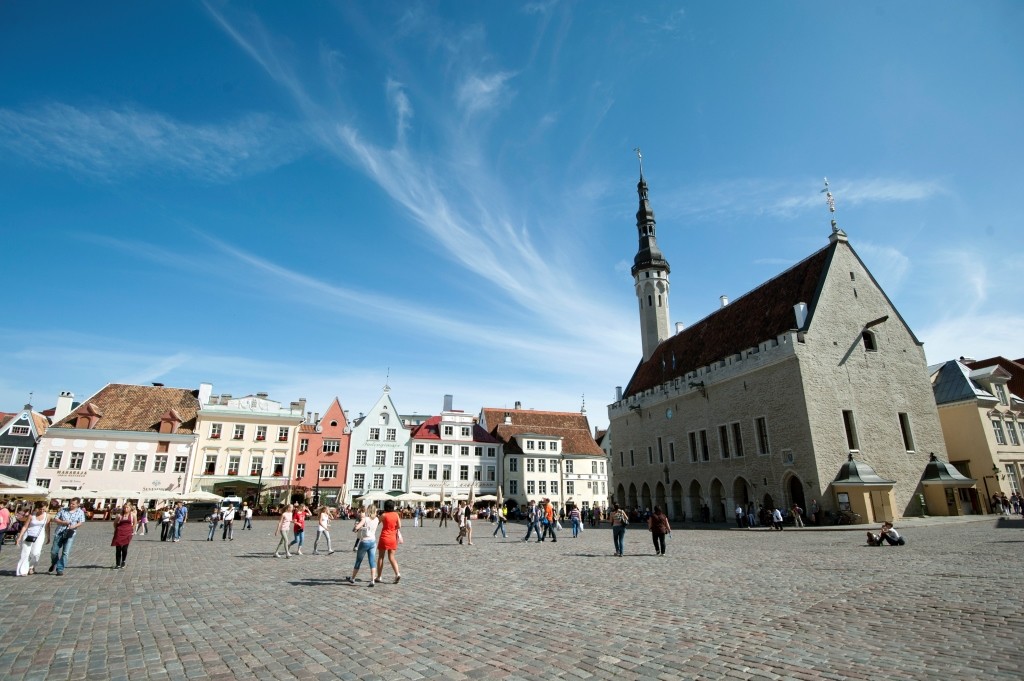 As a recent first time expat arrival, the sensation of being neither a tourist nor a local is unsettling. It is important to me to integrate, in whatever way is possible as an interloper. Living abroad, for me, is about immersion, not about viewing a different version of life from a distance, watching a fascinating society from a great height. Being a part, playing a part, is important to my experience of living abroad, even if it is inevitable that I will always have one foot in the UK. And yet, no matter how at home in the city I may feel, I sense already, that I will never really blend in to Tallinn, inhabiting rather a strange no man’s land between the scratched surface of the tourist visitor, and the through and through, shaped and coloured by the city, of the local.

“No matter how at home in the city I may feel, I sense already, that I will never really blend in to Tallinn, inhabiting rather a strange no man’s land between the scratched surface of the tourist visitor, and the through and through, shaped and coloured by the city, of the local.”

Every day I politely refuse the barrage of leaflets waved in my direction, searching the faces of the mock mediaeval characters haunting me, for any sign of how they know. How can they possibly tell, wordlessly and from that distance, that I am an outsider? What is it – in the way I carry myself that betrays my recent arrival. Perhaps I still look suitably awed by the mediaeval architecture. Perhaps I show too much interest in the rhythm of the Old Town as it moves seamlessly from peaceful, sedate low season to the thumping crescendo of the cruise ship invasion. Perhaps it is that my default face setting is still a half smile at the beauty around me. 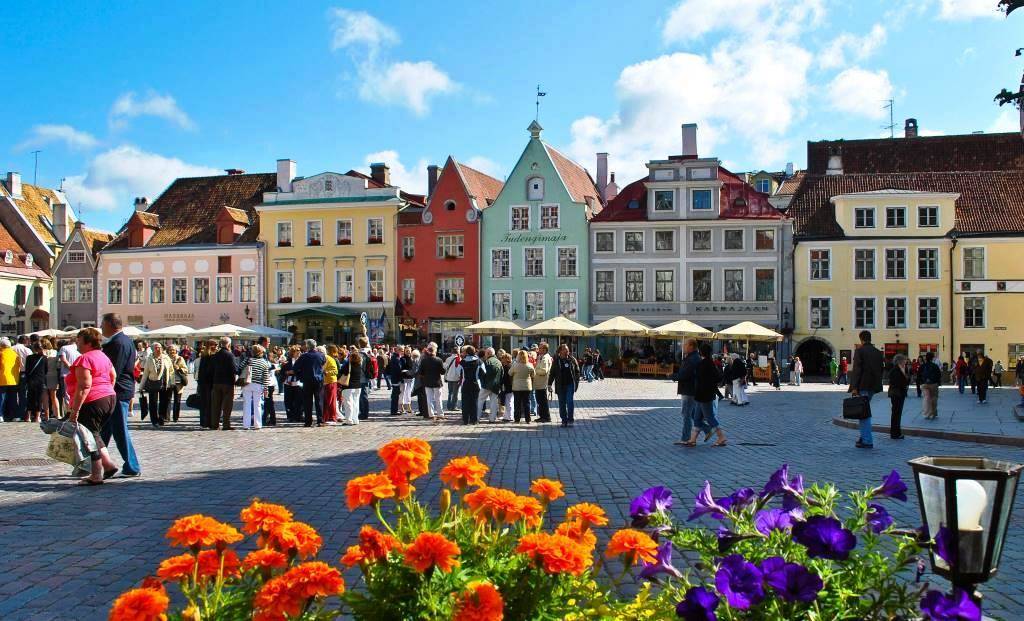 But then, perhaps the benefit of arriving fresh in a new place is this sense of wonder, the awareness of being privileged to be surrounded by living history, without any of the tarnish of familiarity. I have the curiosity and the sense of urgency of a tourist, but with the confidence and local knowledge of a resident. Declining offered leaflets through gritted teeth, turning down the almonds waved in my direction, resisting the flower sellers pointed advances is a price worth paying to keep my sense of good fortune and wonder at being able to live in a special place.

“I have the curiosity and the sense of urgency of a tourist, but with the confidence and local knowledge of a resident.”

I can already understand the Tallinn residents who stay pointedly away from the Old Town as the season advances, and I suspect I will remain in the group unwilling to pay €6 for a mediocre lager served at Tallinn’s Raekoja Plats. However, I don’t believe I will come to take for granted the opportunity to see the towered skyline shadowed in the burning sunset most evenings, instead of as a treasured photo from a cruise day trip.