In “Expats corner” we catch up with foreigners who live or have lived in Estonia, to find out what they really think of the country.

James “Monty” Baxenfield was born in England but has lived most of his adult life in Eastern and Central Europe. He is a writer and an academic who resides permanently in Estonia. Over the years he has taught a variety of subjects at various educational institutions including Tallinn University, University of Tartu and Valga County Vocational Training Centre. In the last couple of years he has become involved with various Estonian social and cultural projects through working with organisations like Eesti Trükimuuseum, becoming a co-founding and director of a small not-for-profit publishing house named Villane Raamat.

James, what brought you to Estonia?

I first came to Estonia as an exchange student. Although that sounds pretty straightforward there is quite a long story behind it as I had never intended to become a student and when I was younger I had no particular desire to move abroad. I’ve drawn liberally from these experiences in an yet-unpublished short story entitled The Accidental Academic. I hope one day this story might make it into print, so for the moment I won’t give away any spoilers.

I make a point of not reading guide books or travel stories about different places, particularly if I know I will go there. I find it somehow takes something out of the experience of discovering a place on your own. When I found out I would be moving to Estonia it was no exception. Occasionally I read travel literature about places I have lived or stayed in for a while. After two years of living in Tallinn I was amazed by how much I didn’t know about the place.

I had heard of Estonia before I moved here. I remember seeing a handful of news stories; most clearly the sinking of the MS Estonia in 1994. Aside from that I recall a handful of references in literature and film, although none of them were particularly authentic. For example, I recall Estonia being mentioned in a long-running UK television series. One character was trying to get his son out of the country to avoid prosecution; his plan was to send him to Estonia to work for a businessman he knew. His wife wanted their son to face prosecution for what he’d done; her husband tried to bring her around to his idea by describing Estonia as a type of prison, but without walls.

To be honest, I was a little bit disappointed. This only lasted a short while during my first few hours in Tallinn. After hitch-hiking from the Netherlands I was wandering around the city – through Nõmme, Mustamäe and Kristiine – towards Kesklinn and Vanalinn. It didn’t conform to any of the stereotypes I had about Eastern Europe at that time. I studied history, more precisely late nineteenth and early twentieth century history (later I would focus specifically on Estonia, Latvia and Lithuania) and, as naïve as it sounds, I was really expecting to find the place as though it had never moved on from that time period. If I had been interested in the Soviet era I’m sure I would have been over the moon. Nevertheless, since then I’ve travelled around, Estonia quite a bit and seen, among other things, a diversity of architectural styles.

Well, when I first came here I had no intention of staying longer than my exchange period. I lived with international students and had a handful of Estonian friends. When I decided I was going to stay in Estonia I started to make more Estonian friends. I managed to stay in Estonia quite a while longer than my exchange period through a combination of different scholarships and jobs. It was when I started working in Estonia that I really started to integrate. Early on I worked at a handful of places, including the Tallinn University where I taught English and worked for the Estonian cafe company Kehrwieder where I was briefly a barista. Over the years I’ve been involved with things like piloting international English language-based vocational training in Estonia. In 2012, the Valga County Vocational Training Centre introduced a programme in logistics for international students. It was the first such programme in Estonia and I taught a number of courses with focused on ethical warehousing and transportation technologies. In short, when I decided that I was going to live here more permanently, integrating wasn’t a problem at all.

Have you learned any Estonian?

I understand a lot more than the people around me think and I manage fine with everyday situations. My biggest problem is actively constructing things in the written and spoken form. I will learn, or rather, I am learning, but as I’m not particularly gifted when it comes to languages it will be a long and difficult process.

As I mentioned, at first I was immersed in the international student community. These days my friends are a complete mixture of locals and expats. Certainly the larger proportion of people I hang out with on a daily basis are Estonians.

What do you do now in Estonia and do you feel that it’s a right environment for you, professionally speaking?

These days I do a few things. I write, a lot, for example – although I haven’t submitted anything to publishers yet.

I now live in Tartu where I’m involved with the day-to-day activities of the Estonian Printing Museum. It’s a place I can often be found teaching people about the history of printing or instructing people in practical activities. At other times I help with organising different events or hang around “inventing” things. The latter actually led to a surprising revelation: recently I’ve become aware that a handful of my colleagues and a couple of visitors (usually people who work in PR) refer to me on occasion as a designer! This was completely unexpected and I certainly don’t think of myself as such. However, thinking about it, people have been emailing me and asking for consultations about design-related topics for a while now. 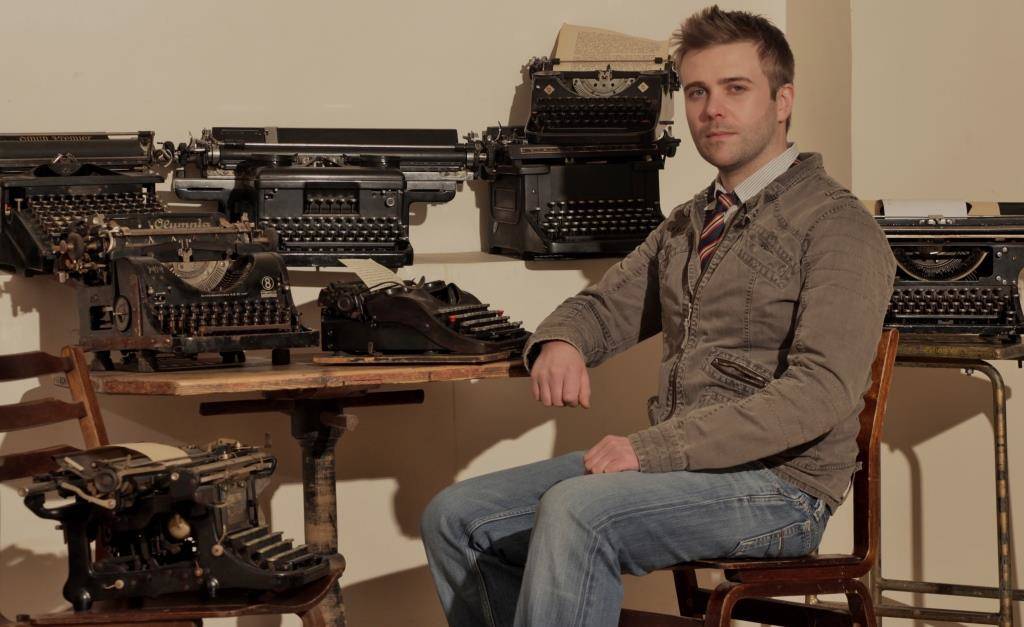 In addition to unexpectedly becoming a “designer” I also became a publisher, although that was a little more planned. In April 2013 I became the co-founder and director of a not-for-profit publishing house called Villane Raamat MTÜ. Primarily we publish a pair of “sister” publications: ELLA (Eesti lühilugude ajakiri) and JESS (Journal of Estonian Short Stories). The pilot issues of ELLA and JESS will come out in February 2014 after which they will be published twice a year in February and September. The purpose of the journals is not only to provide new and emerging writers with a platform to display their work, but to also be a means of inter- and intra-cultural communication. Besides this, Villane Raamat is also developing a series of creative writing workshops to be held in peripheral locations around Estonia. We hope to introduce them in spring and the idea behind them is to encourage both expression through creativity and non-formal language learning among Estonian youth.

Aside from all this I also lecture part time at the University of Tartu. In February I will begin teaching a variety of courses I developed myself on topics ranging from Rudyard Kipling to Estonian literature. In essence, all the courses are about academic writing and communication, but with a nuanced approach.

I find Estonia to be rather progressive in terms of education and in that respect it is the perfect environment for me professionally. Even ELLA and JESS have a covert educational quality related to their structure and their release dates corresponding with academic semesters, but this is something that will be utilised in the future.

Estonia has been open for change for over twenty years. What do you feel has changed the most since you moved to Estonia?

Would I be cheating if I said myself? Since I came to Estonia I’ve travelled through some sort of arc in terms of personality, for the better, I think. At the same time that could purely be down to age.

In respect of change in Estonia it’s difficult to think of just one thing. Perhaps what I notice changing the most is the physical environment. Renovations and redevelopments seem to be going on constantly, whether they are small or large. Recently there have been some more prominent buildings included in this, like the central post office in Tallinn and Vana Kaubamaja (the old shopping centre) in Tartu. This “updating” can be seen in other areas too, like with these Swiss army knife-like ID cards, those excellent over-night parcel/post services, the introduction of new trains etc. These are, of course, only a handful of things that are not necessarily unique to Estonia. However, what I do think is possibly more pronounced in Estonia than in other locations is the dichotomy between tradition and the notion of progress. Both seem to be present in equal measure, although they are not in opposition with one another. This is possibly one of the reasons for Estonia’s success in a number of different fields: keeping one eye on the past and the other on the future.

Of course there are things that I don’t like, but for the most part they are what might be considered “middle class white guy problems”, by which I mean they are trivial and unimportant.

As for what I like the most, again, it’s difficult to think of just one thing. Perhaps for this reason I could say the pace of life. Without a doubt, I’m busier here with various projects and activities than I have been anywhere else. Yet at the same time, particularly in Tartu, I don’t feel the stress of having so much to do. Somehow, without really trying, I still manage to find time to do the things I enjoy.

Would you consider staying permanently in Estonia or are you planning to return to your home country?

There’s a certain part of me that has an unquenchable wanderlust. Nevertheless, Estonia is the place where I reside permanently and the place I feel homesick for when I go abroad. I will certainly travel more in the future, but I’ll always come back here.